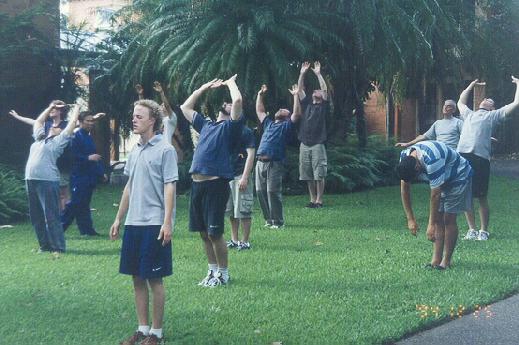 In "Carrying the Moon" students breathe out through the mouth

I believe that too much qi or energy going to your head is not due to your breathing through your mouth or nose but due to forced breathing. It is not difficult to force your breathing, irrespective of whether you breathe through your nose or mouth.

As a native English speaker I appreciated how well written your books are, although I respect the depth of Yang Jwing-Ming's books in his study of Qi Gong.

My first question is from where did the Luohan Qigong forms as outlined in Marcus Santer's book come from? These forms are not mentioned in any of Yang Jwing-Ming's material other than those that are identical to Ba Duan Jin.

Sifu Yang Jwing-Ming is a great qigong teacher. He has done a lot in translating Chinese qigong and kungfu texts into English.

The Eighteen Lohan Hands were taught by the great Bodhidarma at the Shaolin Monastery at Henan Province in China in the 6th century. 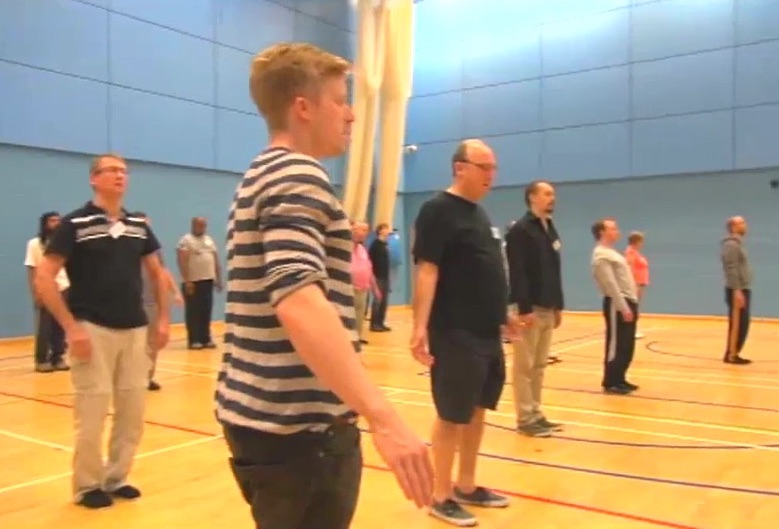 I would like to know if it is possible to visit Grandmaster Wong Kiew Kit and have the opportunity to receive treatment from him. Some months ago I fell into a major depression and I would like to have the experience and wisdom of the master to recover my health.

Depression can be overcome by practicing genuine high-level chi kung. Not only you will overcome your problem, but also you will find joy in daily life, and have good health, vitality and longevity. You can attend my Intensive Chi Kung Course. Please see my website for availbale dates.

It is understandable if someone wonders what can be learned in a few days of an Intensive Chi Kung Course. You can actually learn a lot. You can learn, for example, how to be relaxed and be focussed, tap energy from the Cosmos, let energy work for you, and be healthy and have longevity.

"Cosmic Shower", where we let cosmic energy to shower down our body, may be spiritual cultivation and it may not be, depending how we use the exercise. In our case just now, it is spiritual cultivation. We are actually spirit having a body, not a body having spirit. We change our body every time, though the change is too minute for our eyes to see. Our skin cells, for example, change all the time.

To most other people, they just perform the outward form of the exercise. As I have mentioned often, this may make many people angry. That is their problem, not ours. It is good for our students to know the truth.

I first used the term "Golden Shower" but Riccardo of Portugal (Sifu Riccardo Salvatore) said that "Golden Shower" could have a bad connotation. When a junior entered a university, his seniors might place his head in a basin and flushed water over him. They called it golden shower.

I had the inspiration of "Cosmic Shower" from a Taoist classic called "Opening of Five Golden Petals". It would take years. First a cultivator sits in a lotus position to practice "silent sitting". He places his consciousness at the base of his spine, at the "hui yin" energy point in chi kung terminology. Then he lets his consciousness rise up at the "qi hai" energy point, which is about two inches below the navel.

He calls his consciousness his "foetus". He places his qualities, like his emotions and intellect, in this "foetus". Over many years, he lets his "foetus" rise to his "tan zhong", which is his solar plexus, and his "bai hui", which is the top of his head. When he is ready, he opens his "bai hui" energy point and his spirit roams to heaven.

In Western terms we are made in the image of God. In scientific term it is a spread of universal energy without any differentiation. Other cultures may use other terms. As we are spirit, we cleanse ourselves physically, emotionally, mentally and spiritually. Later we will perform "Cosmic Shower" again where we strengthen ourselves. 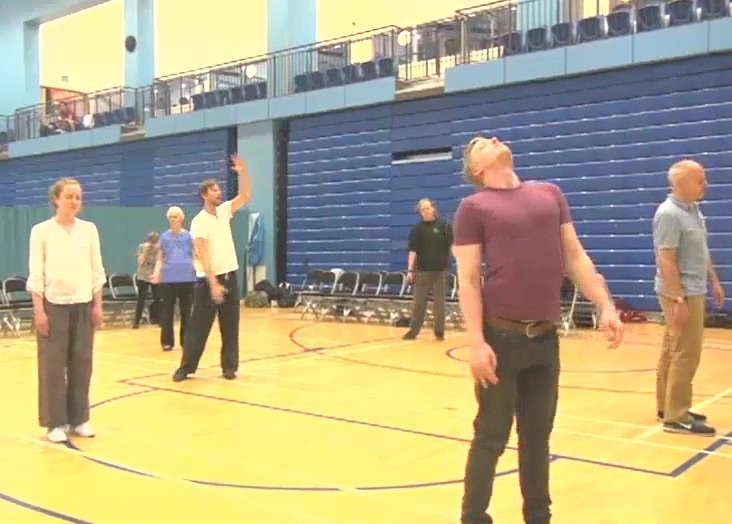 We use a lot of intuitive visualization in "Bone-Marrow Cleansing"

In the passage about Yuan Qi or Original Energy it reads: "It is pre-natal qi, and it depends on post-natal qi from food and drinks."

This would mean that "Original Energy" is the Jing or pre-natal Qi given from the parents. Later in this paragraph it reads: "The most important function of practicing qigong is to develop original qi."

So far, I thought that we cannot develop pre-natal Qi ourselves. We can only slow down its deterioration by practicing Qi Gong. Or is "Original Energy" a fusion of pre-natal Qi together with "Cosmic Energy" from breathing and "Grain Energy" from food and drinks?

In Qigong as Taught by Great Masters, "yuan qi" or original energy, which is pre-natal, is the original energy given by the parents. In the Chinese language, "jing" refers to the sperms of the father. It is different from "jing" which means "essence", as in "jing", "shen", "qi".

Terms in qigong and kungfu are for convenience. Sometimes original qi can be post-natal. For example, we can speak of original qi at the triple-warmer.

Sifu Leonard Lackinger's other questions are found at January 2021 Part 3.

When we talk about "dan tian", which means "elixir-field", we refer to a spot about 2 and 3 inches below the naval, or between the "qihai" and the "guanyuan" energy points. The "dan tian", however, grows as we have more energy. Your "dan tian" is much bigger than most "dan tian". 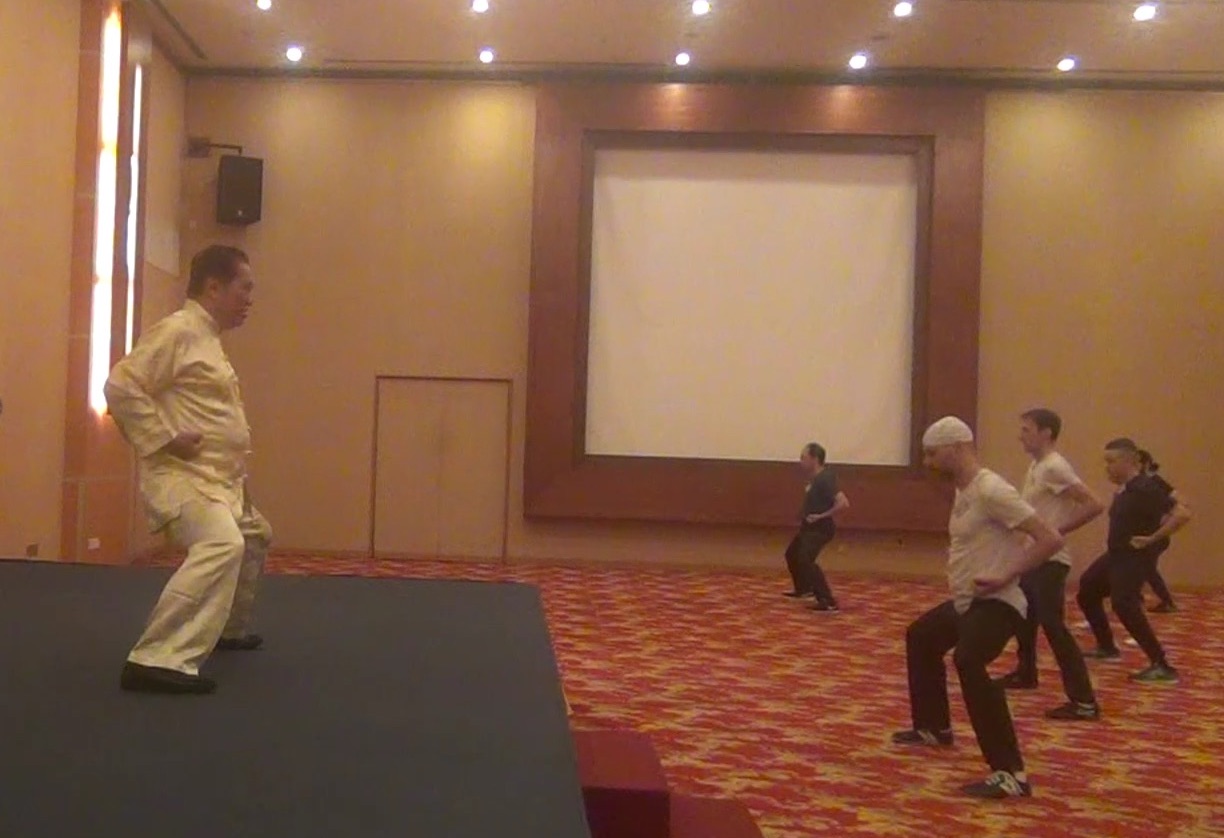 In zhan-zhuang, or stance training, we let chi build at our dan tian, or abdominal energy field. This is for intermediate and advanced students.

We usually use visualizations sparingly.

We use visualization a lot in Bone-Marrow Cleansing. We have to visualize chi at different levels of our body.

Chi (or energy) will flow along the five levels -- skin, flesh, meridians, internal organs and bone-marrow -- but it will take a long time, perhaps 20 years for those who are lucky. If a student is ready, our Bone-Marrow Cleansing course takes only 2 days! By a show of hands, more than 80% of those who attended the Bone-Marrow Cleansing course can feel chi flowing at the 5 levels.

I was recently thinking about some of your instructions at chi kung courses.

After Zhan Zhuang practice: "Let the chi build at your Dantian." Would you recommend this gentle thought for beginning/intermediate/advanced students?

"When breathing in, let good chi come in. When breathing out, let bad chi leave through your mouth." Would you recommend this gentle thought for beginning/intermediate/advanced students, during standard chi kung techniques?

After zhan zhuang (or stance training), thinking of chi (or energy) building at the dan tian (or abdominal energy field) should apply to intermediate and advanced students, not to beginners. Beginners will be struggling to get their forms correct. If they can get their stances correctly, it would be a remarkable achievement. They would be able to develop internal force.