WHY WAS BODHIDHARMA GREAT? 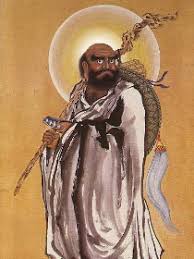 Who exactly was Bodhidharma?

Bodhidharma was a crown prince in the ancient kingdom of Kanchiporam in present-day India who renounced the throne on his own accord so as to spread the highest spiritual teaching to the East, which is present-day China.

He arrived by sea at Canton, then traveled on land to the capital of the Laing Dynasty in the north to meet the emperor, Liang Wu Ti. When the emperor told Bodhidharm that he (the emperor) had contributed a lot for the spread of Buddhism in his empire and asked what his merits were, Bodhidharma answered that these good deeds brought worldly blessings but for achieving the highest spiritual attainment the emperor had not gained much merit.

Bodhidharma was giving the emperor some excellent advice on the highest spiritual cultivation, but the emperor was not readily for this highest teaching. He asked Bodhidharma who he was, to which the living Boddhisattva replied that he (Bodhidharma) did not know. This was a second change for the emperor to be enlightened, or at least be spiritually awakened, hut again he (the emperor) was not ready. So Bodhidharma left the court and went to the Shaolin Monastery.

Why didn't Emperor Liang Wu Ti have much spiritual merits when he had gained many worldly blessings? In other words, why wasn't Liang Wu Ti close to the highest spiritual attainment when he had done a lot of good deeds?

There is a difference between blessings and merits. Blessings result from doing good deeds, and lead to good karma. In fact Liang Wu Ti had excellent karma, resulting in him being born an emperor. But in terms of spiritual cultivation, he was still far behind. The highest spiritual attainment is Enlightenment, which is a cessation of all karma. Karma leads to rebirth, whereas Enlightenment is the elimination of rebirth.

To help monks at the Shaolin Monastery attain Enlightenment, Bodhidharma taught the Eighteen Lohan Hands and Sinew Metamorphosis. He also taught the skill of Bone Marrow Cleansing as well as Zen meditation to attain Enlightenment in an instance. Later, Eighteen Lohan Hands evolved into Shaolin Kungfu, and Sinew Metamorphosis evolved into Shaolin chi kung. Bodhidharma is honoured as the First Patriarch of the Shaolin arts, namely Zen, chi kung and Shaolin Kungfu.

Why did the whole of China bow down to this Indian monk?

While a lot of people of all races honoured Bodhidharma, not the whole of China bowed to him.

A lot of Chinese did not agree with Bodhidharma's teaching. There was a long tradition of debate between the Taoists and Confucians on one hand and the Buddhists on another.

It is interesting that while many other people mistakenly accuse the Buddhists for not believing in souls, the Confucians accused the Buddhists of creating the concept of souls in after-life to frighten people. The Taoists attacked the Chinese Buddhists for following a foreign religion.

Nevertheless, many Chinese bowed down to Bodhidharma because of his sacrifice and greatness. He sacrificed being a king to teach the highest spiritual lessons to the Chinese and people of all races. His Zen teaching helped many people to be Enlightened.

His teaching of Eighteen Lohan Hands and Sinew Metamorphosis resulted in Shaolin Kungfu being the greatest martial art in the world as well as in bringing good health, vitality, longevity, mental freshness and spiritual joys to countless people irrespective of race, culture and religion.

What was so special about Bodhidharma?

Bodhidharma taught us to attain the highest achievement in the supra-mundane level as well as in the mundane level.

It is pertinent to explain that Buddhism as taught by the Buddha, and Zen as taught by Bodhidharma are not religion as normally conceptualized by many people. The Buddha's teaching and Bodhidharma's teaching can benefit people without affecting the people's own chosen religion.

At the supra-mundane level, i.e. beyond the phenomenal world, Bodhidharma's teaching enables us to attain Enlightenment in an instance, called by different people of different cultures as returning to God the Holy Spirit or union with the Supreme Reality.

At the mundane level, i.e. in the phenomenal world, Bodhidharma's teaching enables us to develop a lot of mental clarity and energy so as to attain peak performance in whatever we do in all aspects of our life.