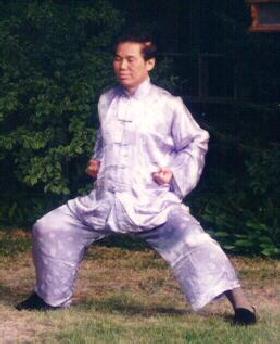 I've learned Chinese martial arts for one and a half years. One of my “ji-ben-gong” is “zhan zhuang” (also called horse-riding stance). I found that this is the most difficult to train. After two to three months of training horse-riding stance, I am just capable of standing for 2 minutes.

The word “ji-ben-gong” means fundamental force training. “Fundamental” does not mean “the lowest level”, but means “most important, being the foundation for all future development”. Most people merely know the surface or dictionary meaning of these terms; they do not really appreciate their meaning. If they did, they would have spent at least five times more effort on “ji-beng-gong.”

“Gong” is provisionally translated here as “force”. Actually “gong” is much more than what the term “force” can suggest, but there is no suitable English term that can convey the complete concept of “gong”, and “force” is the nearest equivalent available, though it is in fact still very far off. The whole idea of kungfu (spelt as “gongfu” in Romanized Chinese) is the training and application of “gong”.

Besides force, “gong” includes aspects like accuracy of form, speed, fluidity of movement, temperament, mental clarity and freshness, spontaneity of reaction, and quick decision making. In some ways “skills” many be a better substitute than “force” for “gong”. but it may sometimes give a wrong connotation.

Zhan zhuang means “stance training”. Some people translate zhan zhuang as “standing on stakes”, which is a literally translation and, in my opinion, translated wrongly. A Chinese word has many meanings, sometimes related, sometimes different from one another. One of the meanings of zhuang is “stakes” or piles driven vertically into the ground to support a building. Another, more usual, meaning is foundation, the result of a collection of stakes. In kungfu, zhuang means “stance”, related to the meaning of “foundation”.

One of the most popular stances used in zhan zhuang is the Three-Circle Stance, or the Taiji Stance as it is widely used in Taijiquan. In southern Shaolin Kungfu, the most important stance is the Horse-Riding Stance. It is the most demanding exercise in all kungfu. The Three-Circle Stance, by comparison, is child's play. If you can persist in training the Horse-Riding Stance, you can do anything in kungfu or in life.

Remaining correctly at the Horse-riding Stance for two minutes is quite an achievement. Most people cannot remain for half a minute. But you should aim at five minutes, which is the minimum requirement for a reasonable attainment in this stance training. You must progress gradually. It may take you many months, or even years, but the effort will be well spent. Many people expressed amazement at my internal force when they sparred with me. This is one of the rewards of my many years of stance training.