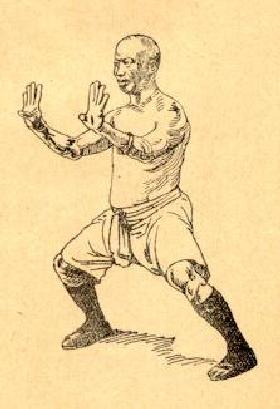 I did all 3 courses with you in England. Firstly, I would like to thank you for coming to the United Kingdom and sharing your great arts. Thanks again for correcting my horse stance.

Some people wonder how great Southern Shaolin masters like Hoong Hei Khoon, Thit Kiew Sam and Wong Fei Hoong had such tremendous internal force. They wonder whether these masters did weight lifting, long distance running, punching sandbags or striking poles. These methods, which many modern kungfu students do in the hope of developing strength and stamina, were not the methods of the masters. The masters' main methods were the Horse-Riding Stance and Golden Bridge.

In my younger days I had been engaged in a lot of sparring and some real fights. Fortunately I was able to get out of combat safely. Looking back, I find that the most important factor for my successful combat was not because I knew a lot of techniques or I was fast, but because I had spent much time practicing the Horse-Riding Stance.

Unless one has the experience, it is not easy for him to understand why practicing the Horse- Riding Stance can contribute to combat efficiency. In this respect I recall Leslie, who is a grandmaster himself. Once I showed him a technique to free oneself from an arm lock. He held my arm tight. I lowered my stance and released his grip with a twist of my arm. All at once he exclaimed, “Ah, the Horse-Riding Stance!” It is significant that he did not mention about the technique at all.

Many people, including kungfu instructors, have read about the importance of the Horse-Riding Stance, often mentioned in kungfu classics. But not many people practice this stance arduously. There are two main reasons. One, they do not believe that such stance training can really develop internal force. Two, they often practice the stance wrongly.

Indeed, it is difficult for uninitiated persons to believe how by merely remain at the Horse-Riding Stance, one can develop not just internal force, but tremendous internal force. Many think that the purpose of this stance training is to develop leg muscles and a solid base. If one wishes to develop leg muscles, he would probably do better with weight training. Developing a solid base is only one of the objectives, and it is only partially correct. Stance training not only give you a solid base but also make you agile!

The main purpose of the Horse-Riding Stance training is not just training the body, but training energy and mind. It is a marvellous method evolved by masters through the centuries where the practitioner's form is reduced to the bare minimum so that he can focus on training his energy and mind. Because the form is simple, it is easy for the uninitiated to make mistakes. The most serious mistakes is that they are tensed although they think they are relaxed. The next most serous mistake is that after some time their stance is not upright.