QIGONG: A CURE FOR CANCER AND CHRONIC, DEGENERATIVE DISEASES? A GLOBAL INTEREST 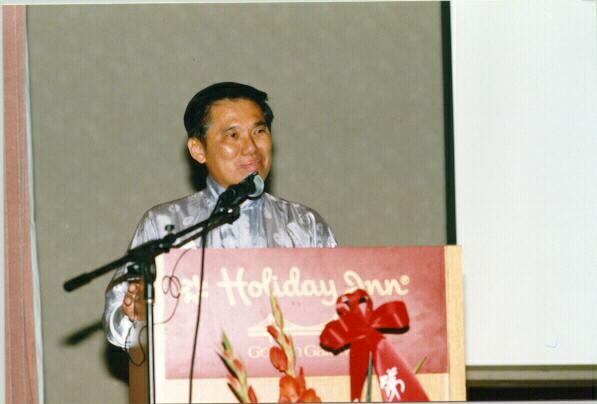 Sifu Wong presenting this paper at the Second World Congress on Qigong at San Francisco, November 1997

This is the full text of the paper presented at the Second World Congress on Qigong held in San Francisco from 21st to 23rd November 1997 by Grandmaster Wong Kiew Kit, the recipient of the “Qigong Master of the Year” award.

Good Health is Our Birth-Right

According to statistics, one out of five persons in the United States suffers from cancer, and the situation in other parts of the world is equally bad. Yet, the top killer today, especially in developed countries, is cardiovascular diseases. Other chronic, degenerative diseases like asthma, diabetes, peptic ulcer, arthritis, rheumatism and other bodily pains are also causing much suffering.

The crucial point I wish to share with you today, and with the world, is that cancer and chronic, degenerative diseases can be cured by practising qigong. This claim, made earnestly, is based not only on sound medical philosophy but also on my many years' experience in curing patients from these diseases. Many other qigong masters also have similar success. I shall present the philosophical explanation of qigong cure in this plenary session, and then demonstrate relevant qigong techniques in subsequent workshops.

To understand how and why practising qigong can cure cancer and chronic, degenerative diseases, it is necessary to be aware that the conventional western medical paradigm is not the only correct way of looking at health care and disease treatment. Another way, time-tested through many centuries, is the traditional Chinese medical paradigm. It would be inspiring for us to know that the Chinese medical system is the one that has maintained the health and sanity of the world's largest population for the longest period of known history.

According to Chinese medical philosophy, there is no such a thing as an incurable disease, although a patient may be incurable if his disease, even a simple one, has done damage beyond a certain threshold. The starting point of Chinese medical practice is that every person is by nature healthy. Just a few minutes of reflection can verify the truth of this premise.

All round you, as well as around everyone in the world, are literally millions and millions of germs that can cause deadly diseases. You are constantly subjected to wear and tear inside your body, and exposed to all types of stress as well as to powerful radiation from outer space. Yet, despite all these disease causing factors affecting you all the time, you remain sane and healthy. Indeed, if not for our natural ability to overcome diseases and regenerate ourselves, no one can stay alive for even a short time.

Then, why do diseases occur in some persons? It is because their body systems have failed to adjust themselves to the disease causing environment. In Chinese medical philosophy this failure is referred to as yin-yang disharmony, yin symbolizing the body systems, and yang the disease causing agents. Happily, the norm is yin-yang harmony: health is our natural birth-right. Illness by whatever names we may label its symptoms, is unnatural, and can be remedied.

Let us take cancer as an example. It is an undeniable fact that we are literally living in an ocean of carcinogens, and are bombarded by radiation every moment. In other words, carcinogens and radiation that cause cancer in one out of five persons in the United States and elsewhere also affect the other four persons. Indeed, what we should ask is not why one out of five persons gets cancer, but why four out of five do not. Actually, according to cancer experts, everyone gets cancer not once or twice, but thousands of times in his life-time, and the same thousands of times he overcomes cancer usually without his conscious knowing. It is only when a person's systems fail to function as they naturally function that cancer or any illness surfaces as a clinical disease.

Let us take another example, that of arteriosclerosis. If too much fat is deposited at the inner walls of an artery, it will restrict the smooth flow of blood, resulting in serious problems. As western medicine at this present stage does not understand the cause of the symptoms collectively labelled as arteriosclerosis, it cannot offer an effective cure. The public have a general impression that if one eats too much fat, he is more likely to have arteriosclerosis. But actually you and most people take more fat than arteriosclerosis patients, yet you do not suffer from the disease. This is because your body systems can adjust to the fat, whereas the body systems of the patients have failed in their natural function. 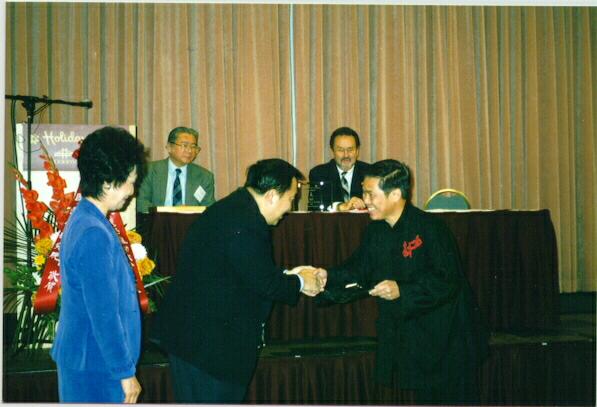 Sifu Wong receiving the “Qigong Master of the Year” award at the Second World Congress on Qigong in San Francisco, November 1997

The therapeutic approach in conventional medicine is to prescribe a particular treatment for a particular disease. This is effective when the cause of the disease is known, such as in malaria and tuberculosis. But when the cause is unknown, as in cancer and chronic, degenerative diseases, prescribing a treatment to cure the disease becomes theoretically impossible. Treatment therefore is relegated to the purpose of relieving symptoms, not actually relieving the disease.

You may be interested to know that in Chinese medical philosophy, physicians do not treat the disease — they treat the patient. Chinese physicians are not concerned with treating cancer or arteriosclerosis, but with getting their patients well. Superficially, treating diseases and restoring patients' health may appear the same, but a deeper examination will show that they are crucially different, and in the case of cancer and chronic, degenerative diseases, it is a difference of resignation or hope, of suffering or recovery.

The Chinese physicians restore the patients' health by restoring yin-yang harmony. In more familiar western terms, it means restoring the natural ability of the patients to overcome illness. Let us not forget that the same factors that cause cancer or any chronic, degenerative disease in a patient also affect other people, but other people do not succumb to the disease despite the presence of disease causing factors because their body systems function naturally to overcome them. More significantly, before the onset of the disease, the patient himself has this natural ability.

While they may be countless immediate factors causing the body systems to fail in their natural functions, the root cause is due to the following two factors:

For example, if the energy flow informing the body that there are cancer cells or fat is interrupted, the body would not trigger the necessary natural mechanism to adjust to the disease causing environment. Or if the body does not have sufficient energy, it would not be able to adjust to the environment effectively. After all, life is a meaningful flow of energy. If this energy flow is disrupted or insufficient, illness would occur.

Qigong is the art of energy, and its fundamental objective is to promote harmonious energy flow. In western terms, this means ensuring that the energy that provides the feed-back system, that produces just the right hormones in the body, that repairs wear and tear, that disposes off toxic waste, that provides immunity and self defense, and that does countless other tasks that keep you, me and everyone else healthy and alive, is functioning naturally. This is achieved in two main ways, which are also the two main aspects of qigong training, namely:

When the energy blockage is cleared and when there is sufficient energy to work the body's natural functions, yin-yang harmony is restored. Qigong accomplishes this very well. Qigong is a viable and essential practice for enhancing everyday life, as well as an effective factor in mainstream health care. Medical professionals trained in other medical systems apart from the Chinese, but interested to employ qigong in their noble work to save lives, need not abandon their own training. Qigong can be effectively and rewardingly incorporated into their present practice. This Second World Congress on Qigong where some of the world best known qigong masters and medical professionals meet, provide the opportunity and platform for this urgent co-operation for mutual benefit.