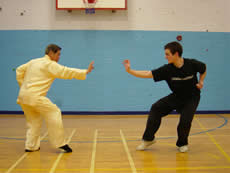 This is a private webpage meant for students of Shaolin Wahnam Institute. Those who have not undergone any kungfu training courses with Sifu Wong may not be able to understand the content because the material, presented in a very concise manner, is not meant to explain anything, but is meant to remind initiated students what they have learnt or will learn.

There are some minor differences or modifications. In Combat Sequence 16 (the first combat sequence shown here) I use a right leopard punch, whereas in the standard version a left leopard pnnch is used. In either case, Roanan is correct to counter "Lift Pot Present Wine". In the next sequence (Combat Sequence 17 or the second combat sequence shown here)the role is reverse, i.e. I should take Ronan's role and Ronan takes mine.

Some photographs are shown at an angle different from what they should be if the photographer had not moved from his original position.

This page has been visited