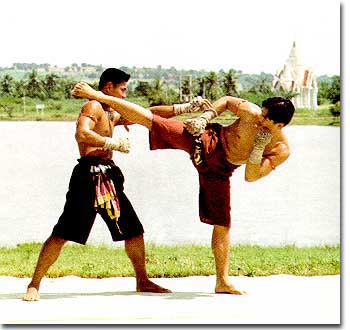 A guest in our Shaolin Wahnam Discussion Forum asked about Shaolin counters against Muay Tahi attacks. The following attacks were provided.

These attacks are also found in Shaolin Kungfu. The following are the Shaolin equivalents:

There are many Shaolin counters against these Muay Thai attacks. Those provided in this website may be classified into the following three categroies:

In the videos and pictures showing Shaolin couters against Muay Thai attack, the person taking the part of a Muay Tahi fighter is Teoh Cheng Keat, who was a Muay Thai instructor before he learned from Grandmaster Wong in the 1980s. So, he knows what he is doing, though some cynical viewers, hiding behind the internet, may still say it is not Muay Thai that is shown, or that the Muay Thai shown is lousy.

Teoh Cheng Keat, who is a successful businessman driving a Mercedes now, has much experience in free sparring. He was a runner-up in an all-style free fighting competition. The champion was also from Shaolin Wahnam.

Continue to the First Series