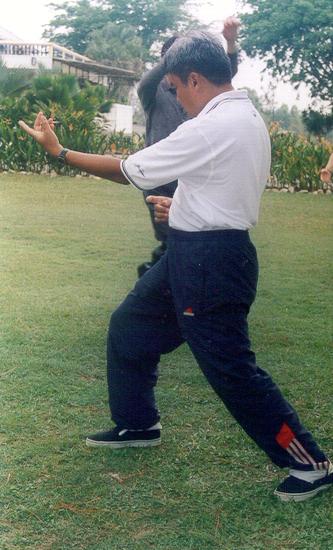 I practice all the ten movements of the Shao Lin Cosmos Chi Kung as described in “Chi Kung for Health and Vitality”, and the leg exercises as described in “The Complete Book of Zen” followed by Self Manifested Chi Flow, Abdominal Breathing and Standing Meditation, every morning. I have been practicing for 2 months now. The whole session lasts about 40 minutes.

It is not necessary to practice so many exercises and for so long in one training session. Different schools of chi kung require different length of time for practice. In our school, Shaolin Wahnam, practicing three exercises, followed by Self Manifested Chi Flow and Standing Meditation for about 15 to 20 minutes per session is sufficient for promoting health, vitality and longevity.

For variety, you may change the three exercises so that you can practice different exercises each day. Unless you have a competent instructor to supervise you, it is not advisable to practice Abdominal Breathing on your own because it is easy to make mistakes without realizing it, and the mistake may sometimes be very harmful. It is not worth to take the risk as you can have wonderful beneifts from the other exercises which are relatively safe.

Once awhile, especially when you enjoy a particular session, you may often unconsciously prolong your practice, which may last for half an hour or more. That is fine. But you need not purposely aim for 40 minutes. But if you have time and enjoy your practice, practicing for 40 minutes is fine too, provided — and this is important — you do not feel tired or sleepy after the practice.

On the other hand, when your energy level has increased as you progress, you can practice for longer and longer time if you like.

The exercises prove to be very beneficial to me. Now I am happy, healthful, and full of energy to do my duties. I enjoy my life with my family. My chronics knee stiffness that I suffered for more than 2 years has completely recovered.

Congratulations. I am particularly happy that you enjoy your life with your family. This is a cherished value in our school, Shaolin Wahnam.

I joined an Intensive Training in a mountain resort on Samatha Meditation and Vipassana Meditation, as originally taught by the Great Buddha Gautama according to Theravada tradition. I acquired good result by realizing that what we perceived is influenced by our perception or concepts, and that the real one might be different. The realization happened when I was in deep meditation in the wee hours earlier.

This was a remarkable attainment. Congratulations. Many people may know this great truth intellectually, but you realized the truth from direct experience in meditation. The difference is very significant. In chi kung terms, this is clearing away mental blockage. In Buddhist terms, you attain Right Understanding. 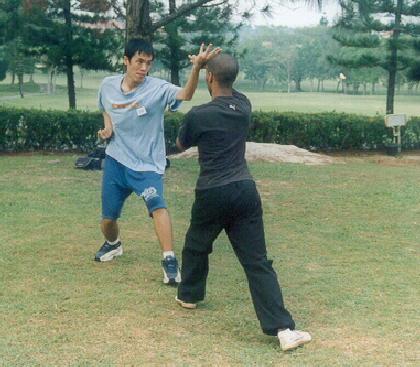 Wei Joo from Malaysia and Leroy (or is it his twin brother, Warren?) from South Africa engaged in combat application during the Intensive Shaolin Kungfu Course in April 2005 in Malaysia

The general principles were to keep one-pointedness of mind to our breath in the abdomen area in Samatha Meditation, whereas during Vipassana Meditation we gave undivided attention to whatever happened in our physical or inner body at the time of their occurrences until the sensations disappeared, and then put our attention back to abdominal breathing whenever we did not feel anything happen at the other parts of the body. The aim was to simply observe any object, including our mind or thought, as it was, without any influence from our perception.

Training the mind to be one pointed is essential in all great teachings.

Often our students may not realize that they have learnt these and other important skills because it is part of our methodology to let students attain the skills and experience the effects first, before explaining to them the relevant philosophy. Once a person can be relaxed and focused at the same time, he can apply this skill to whatever he practices or perform, and his results will be better whatever he does.

This is your case. Although you have not personally learnt from me or any of our Shaolin Wahnam instructors, you have acquired the skill of entering into a chi kung state of mind from my books. When you applied this skill — without you consciously knowing it — to Samatha Meditation and Vipasanna Meditation, you derived wonderful results.

After returning from the meditation training, I am able to do the Shaolin Cosmos Chi Kung much better. I can direct the chi flow to parts of my body, but mostly I let the chi flow wherever it likes. I discover also that I can do all other physical exercises the Chi Kung way by applying the meditation mind that I acquired from the training. When I do fast exercises such as aerobics or sports, I find that I can do several movements in one inhalation and another several movements in another exhalation (without my conscious effort). That way, I am not tired even after some considerable time performing those fast movements.

I would like to have your advice, Sifu, if it is safe for me now to do the Manifested Chi Movements freely, as described in your book.

Yes, it is safe for you to do Self-Manifested Chi Movement. But do not do it freely yet. You must learn to control it, and this has to be done gradually. At the beginning period, when your movements become fast, tell them to slow down.

As you progress in your control, you can gradually allow your chi flow movements to go faster, and then faster. It is like learning to swim. One does not go far into the sea at the beginning, but as his swimming skills improve, he may inch further gradually.

It is very important that you practice Self-Manifested Chi Movement in a safe place, i.e. away from high balcony, high windows and sharp pointed objects.

I have been practicing Taiji for a few months and have developed sore knees. Is this routine, or am I practicing incorrectly? Any advice as to why my knees are sore?

The way Taiji is wrongly practiced today, where students do not “differentiate yin-yang” in their movement but move in linear fashion hurting their knees each time they move, it is routine to have knee injuries. In the United States a survey showed that more than 60% of the 216 Taiji teachers studied reported knee injuries in themselves or their students. This is shocking. Please see pages 60-63 of my book, “The Complete Book of Tai Chi Chuan” for details.

Your knees are sore because you did not practice Taiji the way Taijiquan should be practiced. Even if you did Taiji dance, if you do it correctly you would not have sore knees. Probably you over bent your knees in your stances, and you did not rotate your knees when you move. The constant stress on your knees in your wrong practice cause the soreness, and would later lead to injury if it is not corrected. 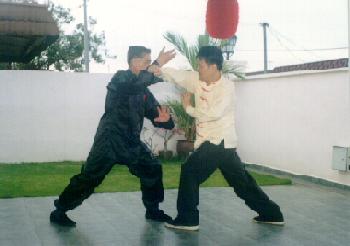 I am 21 years old and I live in Norway. I have for a few years wanted to study kung fu, prefrably Shaolin. I have no experience in other martial arts but I really want to learn. Here in Norway there is no authentic kung fu gym, and people some times laugh when I tell them about the marvelous benefits of Chinese martial arts. Most people haven't even heard about qi!

When you study kungfu, you learn about its history and philosophy, its various styles and their characteristics. You may know, for example, that Bodhidharma is honoured as the First Patriarch of Shaolin, and why practicing Shaolin Kungfu will make you healthy and combat efficient. But you may be unable to perform a Shaolin kungfu set well, or may not even be healthy and cannot defend yourself when attacked.

But when you practice kungfu, you go into physical action not just intellectual reading. You perform kungfu patterns and sets, and if you do so correctly you will be healthy and be able to defend yourself efficiently. You will also have other practical benefits like mental freshness and vitality to enjoy your work and play that merely studying kungfu does not give you.

But qi and the marvelous benefits of genuine, traditional Shaolin Kungfu and Taijiquan are certainly real. We at Shaolin Wahnam speak from personal experience. You can read many such experiences from my students and my students' students in the Shaolin Wahnam Discussion Forum.

I wonder if there are any places where I can study Chinese kung fu over a longer period, a few years at least. I have sent mails to a few other places, but I never get any replies. My step-father tells me that it is only a childish dream and I should grow up! But I still hope that some day I may study Shaolin.

One main reason why you did not receive replies is because genuine, traditional Shaolin Kungfu is very rare today.

Yet, there is a good place where you can practice genuine, traditional Shaolin Kungfu over a long period, and that is your home. But first you must learn it correctly.

I shall list out the exact steps you can do to realize your dream.

It is understandable that many people find it hard to believe my previous statement about kungfu accomplishment, and think that I am presumptuous or boastful. In fact over the graduation dinner in the just completed Intensive Shaolin Kungfu Course (April 2005), I told my students that at that very time they had accomplished (in five days) more than what most kungfu practitioners might not accomplish in 10 or 20 years.

One of the course participants was Wei Joo, who lives in Kuala Lumpuir in Malaysia. When he attended my Intensive Chi Kung Course a few months ago, he expressed his desire to attend my Intensive Shaolin Kungfu Course. I told him that he must have some prior kungfu experience. I told him to learn some kungfu, or even just external kungfu forms, in his hometown first.

But he was not satisfied with the kungfu schools he found, so he learned from my book. I was very impressed with his performance at the course. He could spar reasonably well using typical kungfu forms for a few hours without feeling tired. You can read his and other participants' comments at Comments & Experiences from participants of an Intensive Kung Fu Course in the Shaolin Wahnam Discussion Forum.

Another excellent example is Eugene of the United States. His kungfu journey was similar to that of Wei Joo. He attended my Intensive Chi Kung Course to overcome some health problem, which he did. He also wanted to attend my Intensive Shaolin Kungfu Course. As he was not satisfied with the kungfu taught in his home area, he learned from my book. His performance at the Intensive Shaolin Kungfu Course was excellent.

You can view him free sparring with Anthony using typical Shaolin patterns shown in video clips here, here and here. These video clips were taken impromptu just about two years after he had started Shaolin Kungfu training with me. Now Eugene is a Shaolin Kungfu instructor. But much more important than his kungfu abilities is his personal transformation. From someone his parents were constantly worried about, he has transformed himself within a few years of Shaolin training into someone full of joy, hope and zest for life.

If your dream to practice Shaolin Kungfu is just a passing fancy, you would find the first two steps difficult. You would find a lot of excuses for not carrying them out. But if your dream is really your life's goal, step three is the biggest hurdle, but you will find it most rewarding.