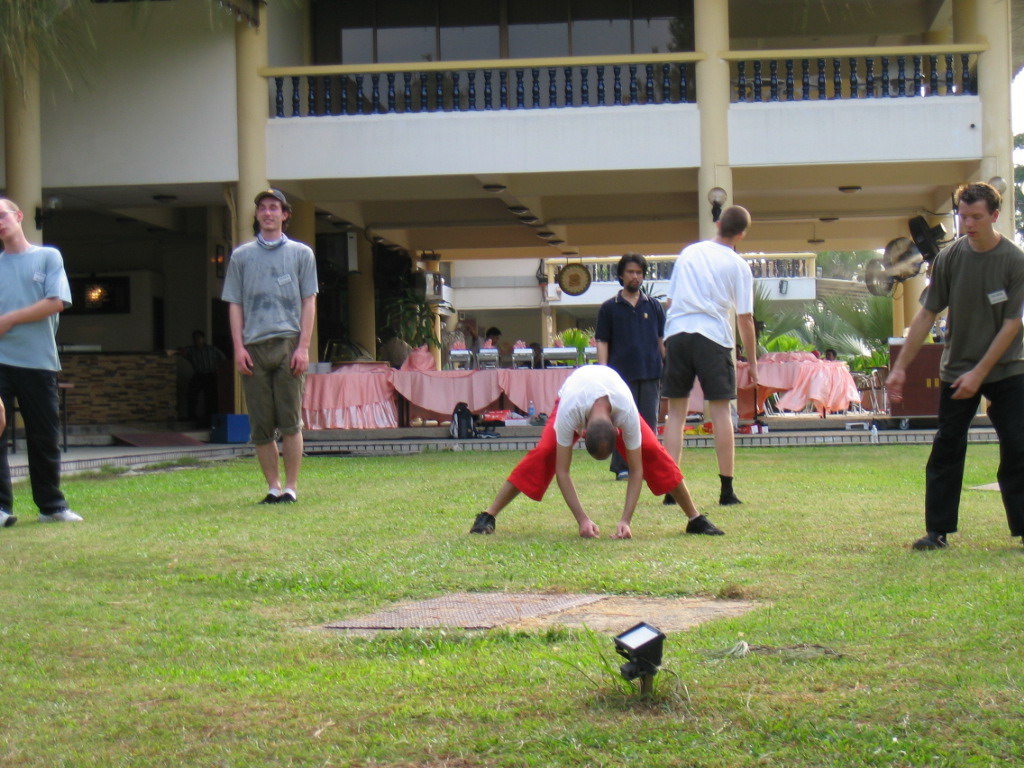 In Shaolin Wahnam, Shaolin Kungfu as well as Wahnam Taijiquan are practiced as chi kung. Here participants at the Intensive Shaolin Kungfu Course in November 2004 in Malaysia enjoy a chi flow at the end of a training session.

I have now, after much searching and waiting, found a master who teaches Southern Shaolin Kung Fu. My intention was to practice both Kung Fu and Chi Kung, but when I consulted him, he said that I would have to choose between Kung Fu and Chi Kung, since practicing both would be too powerful for me.

Different schools and different masters have different philosophies and methodologies. What your master said is a common belief and practice among many schools and masters. Indeed, it is a norm that kungfu students have to practice kungfu for many years before they have a chance to practice chi kung, or “nei kung” as it is sometimes called.

For example, when our students practice the Horse-Riding Stance or the Three-Circle Stance, they develop internal force. After practicing footwork movements, our students go into chi flow.

There are great differences in the levels of chi kung practiced. But regardless of whether it is of a low level or a high level, if it is genuine chi kung it performs two fundamental tasks, namely it circulates energy and it builds energy. Chi flow and internal force are the expressions of these two fundamental tasks.

In Shaolin Wahnam, every thing we practice in Shaolin Kungfu or Wahnam Taijiquan involves these two fundamental chi kung tasks. When a Shaolin Wahnam student practices a kungfu set or is engaged in sparring, he does not just perform a kungfu set or spar, he also circulates his energy and builds his energy. Hence not only he is not tired after his set practice or sparring, he actually has more energy than before he started his practice.

This is very different from what happens in most other kungfu schools. In the first place, most other kungfu schools today do not have internal force and chi kung in their repertoire. In the few schools that have, the students have to practice special chi kung exercises to get these skills or benefits. When they perform a kungfu set or spar, for example, they do not develop internal force or enjoy energy flow as a result.

You can have a view of Shaolin Wahnam students enjoying an energy flow as a result of footwork training here. You can see Ronan applying internal force to break the bottom of two bricks piled one on top of the other in this video clip. Ronan did not have to practice special chi kung exercises to achieve this ability. It is the result of his regular kungfu training in Shaolin Wahnam.

He told me that I would probably have to wait for about five years before I could begin my Chi Kung practice. This surprised me a bit, since before I met him I had already been practicing “Lohan Embracing Buddha” from your book, “The Art of Shaolin Kung Fu for Self-defence, Health and Enlightenment”, without feeling sick or feverish hot or anything.

What you master said is the norm. To be exact, it was the norm in the past. Today, it is a norm for kungfu students to keep on learning kungfu sets, and almost nothing else, irrespective of how long they have practiced kungfu. Very few kungfu students today have a chance to practice chi kung.

He explained that, because of my young age (I am 17) and all the things going on in my life (school, friends, girlfriends, physical activities), I would not be able to control my chi and would therefore feel very hot and sick when practicing Chi Kung.

Your master may have good reasons for his advice, but our philosophy and methodology are different. We believe that because of your young age and all the things going on in your life, you should practice chi kung, which will enable you to handle all these things more efficiently.

In our methodology, having full control in chi kung training is very important. If you practice correctly, controlling your chi is a natural result of your training. Of course you will have to learn personally from a master or at least a competent instructor. If you learn from books, you may practice incorrectly. 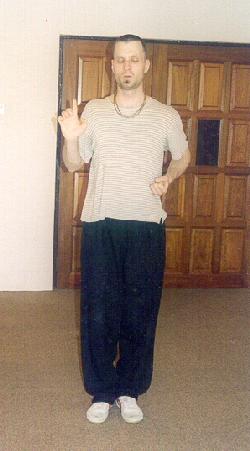 Charles from Canada performing “One Finger Shooting Zen” during the Intensive Shaolin Kungfu Course in Malaysia in April 2005.

After about two weeks daily practice of “Lohan Embracing Buddha” I had to go to the toilet about every third hour during daytime, and even up to twice a night. My urine production had increased dramatically over-night it seemed. I do not know why this had happened all of a sudden but I concluded that it had to do with my Chi Kung practice and I assumed that it was just a way of cleansing my body.

It is more likely that you have practiced wrongly. Going to the toilet may be a sign of cleansing, but doing so excessively as in your case is a sign of having weakened your kidneys due to wrong training. You should seek a chi kung master to rectify your problem.

I decided to quit practicing Chi Kung and wait for the five years to pass. After about a week my toilet need decreased, but it did not go back to the state before I practiced Chi Kung. I suspect that this particular Chi Kung exercise was too powerful for me, especially doing it every day. How can I return to my natural state?

By quitting your wrong practice, you discontinued the harm to your kidneys. But the harm has been done. You have to consult an expert to rectify it.

How powerful one can be from his chi kung training depends on a few factors. More important than what he practices is how he practices it. In other words, different people may practice the same exercise, like “Lohan Embracing Buddha”, but they all may attain different levels of power.

Relatively speaking, “Lohan Embracing Buddha” is a mild exercise. If you developed so much side effect practicing it, which made you go to the toilet excessively, you must have practiced it very wrongly, even though your performance of the external form is correctly.

More questions from Niklas will appear in the next issue, June 2005 Part 3, of the question-answer series.

Sifu there is something I would like to share with you and ask you. It doesn't seem to matter if I do Flicking Fingers, One Finger Shooting Zen or stance training. I feel the same power afterwards during chi flow.

The type of power and chi flow that results from an exercise depends on a few factors, like the needs of the body, the state of mind, the developmental stage of the practitioner and the kind of exercise performed.

Quite often, regardless of the kind of exercise performed, the practitioner has the same type of power or chi flow if he allows it to flow freely. This is mainly because of the needs of his body. For example, if he has an internal injury, his chi flow will be quite similar irrespective of what exercise he performs, because chi naturally flows in a way that best soloves his problem.

The three exercizses you mentioned — Flicking Fingers, One Finger Shooting Zen, and stance training — are very effective for developing internal force when performed correctly. If all other things were equal, there is some fine differences in the force developed from the three different exercises, but as you have performed them well, the internal force derived from them is so tremendous that you may not feel the fine differences.

An analogy may make this clearer. If you compare a powerful car like a Mercedes with a small car, you can clearly feel the difference in their power. But if you have three powerful cars — a Mercedes, a Volvo and a BMW — you may feel that all of them are similarly powerful, though there are fine differences among them.

Yes, it is normal to feel the same power after each exercise. It is also normal for each exercise to have a different result or feeling. The power, feeling and other results are not due solely to the exercises; other factors may also be influential.

If all other things were equal — which is almost always not true — stance training accumulates your internal force at your dan tian, One Finger Shooting Zen makes your internal force fluid, and Flicking Fingers consolidates it all over your body. In other words, stance training makes you solid, One Finger Shooting Zen makes you versatile, and Flicking Fingers makes you powerful. 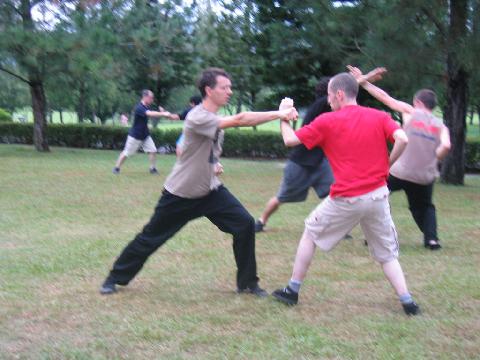 Participants of the Intensive Shaolin Kungfu Course in Malaysia in November 2004 practicing sparring. In the foreground Mark from England attacks with a “Black Tiger Steals Heart” and Sifu Mark from Scotland responds with “Single Tiger Emerges from Cave“. Behind them the attacker uses ”Poisonous Snake Shoots Venom” and the defender responds with “Golden Dragon Plays with Water”.

In the past did some masters prefer one of these exercises over any of the others?

Yes, in the past masters who had the opportunity to learn all the three exercises often prefered one over the others. But not many masters had this opportunity to learn all these three exercises. Flicking Fingers and One Finger Shooting Zen are Shaolin arts. Hence, masters of other styles, like Taijiquan, Hsing Yi Kungfu, Wing Choon and Praying Mantis, may not know them.

Probably all masters started with stance training when they were students, although different kungfu styles may prefer different stances for deepening. Golden Bridge is preferred in Southern Shaolin, Three-Circle Stance in Taijiquan, and Santi (Three-Body) Stance in Hsing Yi Kungfu.

Hence, even when some Taijiquan and Hsing Yi students had become masters, they still continued their Three-Circle Stance and Santi Stance for internal force development. Lifting Water and Cluoud Hands are also effective force training methods in Taijiquan, but the force developed is quite different from that in Three-Circle Stance. On the other hand, some Shaolin masters chose to continue with Golden Bridge though they might have been taught the other two powerful exercises.

Also Sifu, could you please tell me the names of these patterns in Cantonese:

The Cantonese pronunciation of the following patterns are as follows: