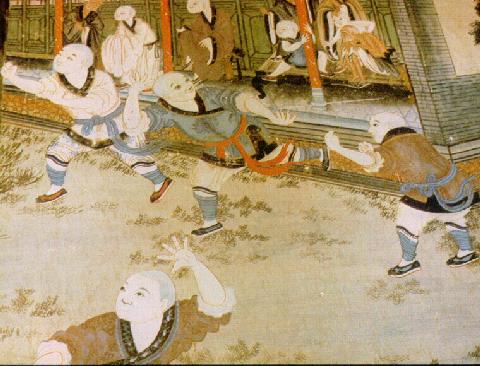 My Shifu, (a modern Shaolin monk) says that freestyle fighting is the heart of Shaolin Kungfu. I haven't progressed too far in the Temple yet, but from what I know the techniques are taken from the forms. Very few are taught, but they are studied in great detail, and used in the “freestyle” combat. It is not the forms themselves that are the fight. There is no guaranteed form of attack for any fight. Do you have any opinions on this?

Yours is a very common case because employing kungfu patterns for real combat or free sparring is so rare today. This is because the essence of kungfu has been generally lost, those who can still fight or spar using kungfu patterns are the exception. But when Shaolin monks or other masters themselves advocate that "freestyle fighting is the heart of Shaolin Kungfu”, it becomes alarming. It sounds the warning that if nothing is done, genuine Shaolin Kungfu will be lost forever within the next two generations.

Freestyle fighting may be the heart of modernized wushu because its exponents do not know how to fight using the patterns they perform in solo, but it is certainly not in genuine Shaolin Kungfu, or any genuine kungfu. Just a quick look at any kungfu literature or illustration will show that kungfu masters in the past used kungfu skills and techniques in combat.

Very fortunately, the gigantic murals in the White Robe Hall of the Shaolin Temple in China still stands. The gigantic murals are testimony to the kind of Shaolin Kungfu practiced during the Ming Dynasty, which was between four to seven hundred years ago. They show Shaolin monks sparring, and they used Shaolin patterns, like the ones kungfu and wushu exponents practice today.

Unless the person in question is ignorant, to advocate that freestyle fighting is the heart of Shaolin Kungfu is to imply that all the past masters who said they used kungfu patterns in combat were liars, or all those who practice kungfu patterns for combat today are fools.

If you wish to use your kungfu or wushu techniques for combat, you just have to learn and practice doing so methodically. If you go straight to free sparring immediately after form training, you will fight freestyle, which is another way of saying you will fight like children.

If you train punching and kicking methodically, like what some current Shaolin monks do, and use them in combat, you will not fight freestyle; you will fight like boxers or kickboxers.

If you have been methodically trained to spar using kungfu patterns, when an opponent attacks you, irrespective of whether he uses kungfu forms or any other martial art forms or use freestyle, you will spontaneously respond with the kungfu patterns that you have been trained in. You will not need to think what pattern to use, or what stance to jump into; you will just respond correctly and spontaneously. 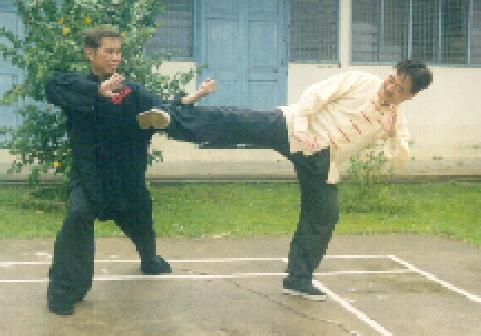 This picture taken many years ago showed Grandmaster Wong and his senior inner-chamber disciple, Goh Kok Hin, in Shaolin combat application using the same techniques and the same tactics as the Shaolin monks used many hundreds years ago as shown in a famous mural at the Shaolin Temple