WHAT DO YOU THINK OF BRUCE LEE AS A MARTIAL ARTIST? 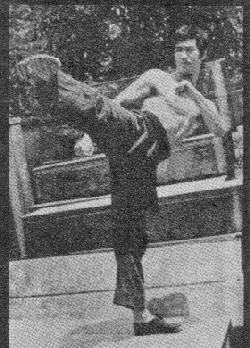 A typical kick from the celebrated Bruce Lee

What do you think of Bruce Lee as a martial artist? Do you think that he was one of the best in his era? Did he practice chi kung or was his incredible speed and strength purely from external mechanical power?

I have much respect for Bruce Lee as a martial artist and regard him as one of the best in his era. He did a lot for the popularity of kungfu in the world, and was often known as the kungfu king. But, in my opinion, what he taught as well as shown in his movies was not traditional kungfu — although the movies were advertised as kungfu movies and accepted by the public as such!

There are a few reasons why I say that Bruce Lee's art was not traditional kungfu, although he did learn from the great Wing Choon Kungfu master, Yip Mann.

Bruce Lee's typical forms were not traditional kungfu forms, nor were they typical Wing Choon forms. All styles of kungfu, including Wing Choon, pay much attention to stances, but Bruce Lee paid little or no attention to stances. He bounced about — something not a single established kungfu master in the past did.

Bruce Lee's kicks, for which he was famous, was most uncharacteristic of traditional kungfu. Indeed they were what established kungfu masters would advise against. His kicks glaringly contradict a basic kungfu tenet in combat, that is, do not expose your vital parts.

Why, then, were Bruce Lee's kicks so effective in combat? I could think of two possible reasons. One, Bruce Lee was extremely skilful. He was so fast and powerful that despite the technical weakness of his kicks, his opponents could not defend against them. The second possible reason was that his opponents did not know about this weakness, or they were not skilful enough to exploit this technical weakness.

I do not think Bruce Lee practiced chi kung. I think his speed and strength came from purely external, mechanical means. Bruce Lee's training emphasized only the physical. That explained why he had huge, impressive muscles. Chi kung emphasize the energy and the mind. From the chi kung perspective, having huge muscles is a detrimental factor. The muscles lock up energy which should be use for other combative as well as non-combative purposes.

Muscles also slow down a person's movements. Despite this handicap Bruce Lee was very fast, because he compensated this weakness with diligent training. If all other things were equal, given the same time for training, another person with less muscles would be faster than Bruce Lee. Or, from another perspective, to be equally fast Bruce Lee would have to train much harder than the other person.

In fact Bruce Lee over-trained, committing a serious mistake in traditional kungfu training, especially chi kung training. Not only he over-burdened his vital organs, his fast and powerful movements not only required tremendous amount of energy to sustain, he also produced a lot of toxic waste as a bye-product.

As he did not practice chi kung, he did not pay much attention to breath control. Hence, not only he could not breathe in enough energy for his vigorous movements, nor could he release the stored energy in his muscles, also he could not dispose of the tremendous amount of toxic waste produced. The accumulated toxic waste clogged his energy system, resulting in a further deterioration of the his vital organs to sustain life.

Bruce Lee's contribution to world's martial arts was undeniably great. It was a real pity he did not practice chi kung, otherwise he would not have died so young.

The above is taken from Question 5 of April 2002 Part 3 of the Selection of Questions and Answers.