WHO WAS THE TAIJIQUAN TEACHER OF GRANDMASTER WONG? 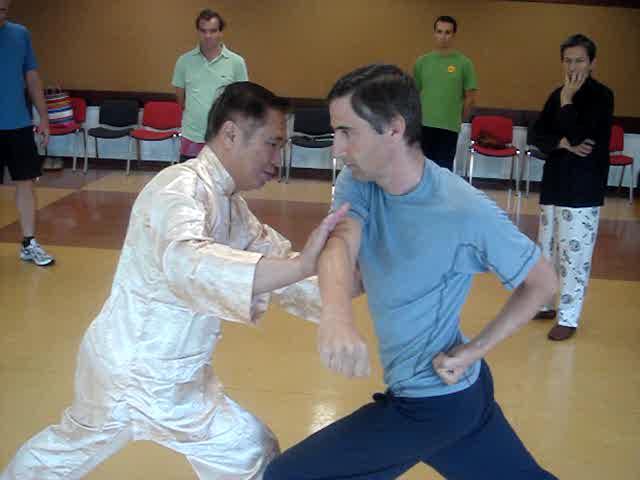 Taijiquan is a beautiful internal art

I am curious to know who was your Taijiquan teacher. You are a master, and I've wondered for a long time, but couldn't find it on your webpage. I was wondering who taught you and helped you achieve your skills.

In Shaolin Kungfu everyone of my four teachers were patriarchs of their styles. This was no co-incidence because, except my first teacher, Uncle Righteousness, whom I met through luck, I spent time to search for my teachers.

About 30 years ago at a public park in Alor Star, Malaysia, where I went daily for my kungfu training on my own, I saw an elderly man, whom I did not know his name, practising the 108-Pattern Yang Style Taijiquan Set daily without fail. His performance was impressive.

Although we were at the same park every day, we had not talked to each other. But one day I approached him politely and asked if he could teach me Taijiquan, and in return I would teach him combat application if he liked. He rejected my suggestion, saying that my kungfu was “hard”, and Taijiquan was only “soft”, and any hardness would spoil his Taijiquan.

His reply actually put me off. It indicated that he did not realize all great martial arts, including Taijiquan, are both “hard” and “soft”. Any martial art that is only “hard” or only “soft” is either not great, or the exponents have not learnt it completely.

So I reasoned to myself that if I could not have a living Taijiquan teacher, I could learn from the best Taijiquan masters from their books. This was not difficult for me. I had a good collection of Taijiquan classics. More significantly, as all fundamental Taijiquan skills and techniques can be found in Shaolin Kungfu, for me learning Taijiquan was like selecting relevant skills and techniques from my Shaolin Kungfu and practising them in manners normally done in Taijiquan.

The first thing I did was to learn an established Taijiquan set to serve as basis. This I readily accomplished from a little book showing the 108-Pattern Yang Style Taijiquan Set demonstrated by the great master Yang Deng Fu himself.

Two occasions were particularly helpful to me. Earlier my Shaolin master Sifu Ho Fatt Nam, and my Wing Choon master Sifu Choe Hoong Choy had taught me how to perform the Shaolin Bagua Set and the Wing Choon Siew Lin Tao slowly and gracefully so as to generate energy flow and to develop internal force respectively. When performed slowly these sets appear like Taijiquan sets. So it was quite easy for me to generate energy flow and develop internal force with the Taijiquan set.

Then I spent much time on various methods of force training recorded in Taijiquan classics, like the Three-Circle Stance, “Lifting Water” and “Grasping Sparrow's Tail”. Some Taijiquan classics recorded profound explanations on combat application, including the use of tactics and strategies. These explanations were in concise jargons, so most people could not understand them, but because of my Shaolin training, they were very clear to me.

It was also clear to me that what masters recorded in their classics were true, but most people today cannot understand it and therefore do not believe it. Take a simple example, even at the physical level. Taijiquan masters have advised that movements start from the feet, are controlled by the waist, and complete at the hands. But although most people, including some so-called masters, understand all the words, they do not know the meaning. If you throw a punch as in Western Boxing, like what some so-called masters taught their Taiji students to do, you reverse the process — you start your movement at the hands, with no control at the waist, and complete at the feet.

When I taught chi kung in Australia in the 1980s, many of my chi kung students were instructors teaching external Taijiquan forms. When I showed them how they could generate energy flow and develop internal force with their forms, they were simply amazed. But I refused many requests to teach Taijiquan.

This gradually changed. The turning point came when I saw a video of a Taijiquan grandmaster from China demonstrating Taijiquan combat application. He jumped about like in Taekwondo, and pushed away his assailants using body mechanics. It was glaring to me that he knew neither Taijiquan philosophy nor combat application! Yet he was a very well known Taijiquan grandmaster, internationally acknowledged, with millions of Taijiquan students all over the world using him as a model. That video prompted me to write “The Complete Book of Tai Chi Chuan”.

The above is taken from Question 9 of February 2002 Part 2 of the Selection of Questions and Answers.