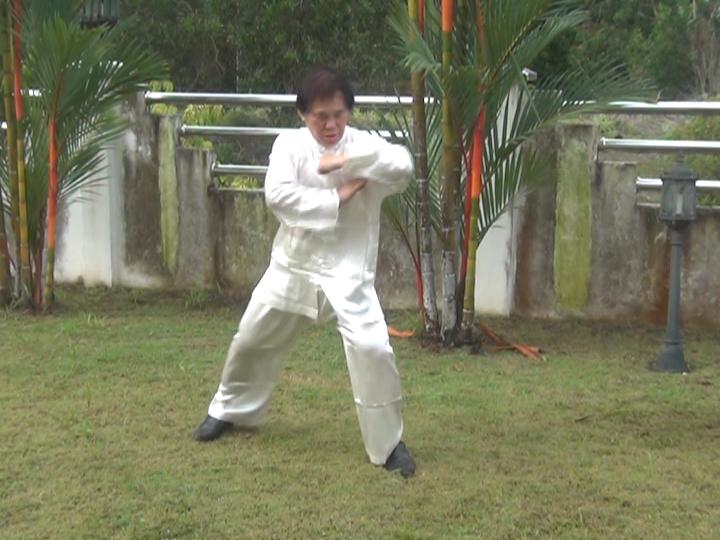 Our Wahnam version of the set contains two additional patterns, Elbow Strike and Shoulder Strike, in order to include all of the 13 Techniques of Tai Chi Chuan.

Sigung, where do these 13 Techniques come from? How can they help us to deepen our Tai Chi Chuan practice? Can any Tai Chi Chuan pattern be classified into these 13 fundamental movements, for example "White Snake Shoots Venom" or "White Crane Flaps Wings" when used as a kicking technique?

It is often said that Taijiquan originated from 13 postures or techniques. These 13 postures are in two groups, called “ba men” or “eight gates”, and “wu bo” or “five steps”.

The eight gates or techniques are

Please note that “an” is usually translated as “push’, and “kao” as “shoulder strike” by most Taijiquan practitioners and scholars. My translations to “in contact” and “anchor” respectively are unorthodox, but I base my translations on their practical application as well as the meaning of the Chinese words. I suspect that the majority of those who describe these terms merely copy descriptions from other sources, often without really understanding what they mean.

We frequently use “Grasping Sparrow’s Tail” in our teaching as it is an excellent sequence to demonstrate fundamental Taijiquan movements. We provide poetic names to the patterns as follows:

The technique, “chen”, which means “sink”, is also found in “Grasping Sparrow’s Tail” of Yang Style Taijiquan, but is normally not singled out for mention.

In “Grasping Sparrow’s Tail”, the technique, “kao”, is expressed in the pattern, “Shoulder Strike”, a term we also use in our school. But I interpret “8 gates” not as 8 patterns but as 8 techniques, which will give this concept of “8 gates” more room for application.

In other words, in my interpretation, “ward off”, “roll back”, “press forward” and “in contact”, refer not to patterns, but to techniques. In “Grasping Sparrow’s Tail”, these principles are manifested in “Immortal Waves Sleeves”, “Double Dragons Plays with Water”, “Push Boat According to Flow” and “Open Window to Look at Moon”. In other context, the same techniques may be manifested in other patterns.

The other 4 of the 8 techniques are often expressed in the following patterns:

The cai or grip technique is a good reminder that chin-na is an important aspect of Taijiquan. But many Taijiquan practitioners today have no idea of chin-na. They have no idea, for example, how “Playing the Lute’ can be used as a chin-na technique. In our school, a pattern we often use to execute the grip technique is “Old Eagle Catches Snake”.

The pattern, “Shoulder Strike”, is classified as a kao or anchor technique because the shoulder strike is not executed from the shoulder but from the bad foot, which acts like an anchor. The anchor technique is frequently used in felling an opponent. A good example is “Carry Tiger Back to Mountain”. An exquisite example is “Black Bear Sinks Hips”. Where do you think is the anchor in this Black Bear pattern?

The five steps are as follows:

Moving forward, backward, to the left, and to the right are obvious. An excellent approach to practicing all these footwork movements is our Pushing Hands.

I faced this problem initially. I spent much time thinking over it. The “enlightenment” came when I started teaching Taijiquan, reinforcing the advice that a teacher learns a lot when teaching.

In fact, remaining at the centre is a key to winning in many combat situations, especially in modern times when opponents frequently fight like Boxers or use kicks randomly. If you are one of those who tend to retreat when facing a threatening opponent may recall me telling you to nail your feet to the ground.

We also train this important technique of remaining at the centre in Pushing Hands. Can you guess at the important skill involved? Yes, it is body-movement. You sink your body backward, without moving your feet, to avoid an opponent’s attack. You may remember my advice in Pushing Hands – when an attack is short-ranged use your hands, when it is middle range, use body-movement, when it is long-range move your feet.

I reckon these 13 techniques were manifested in 37 patterns which were performed continuously without a break like the continuous flow of Yangtze River, the longest river in China, sometimes called the Long River. Over time this short set developed into a long set. The Wudang Taijiquan we practice in our school has about 140 patterns.

Besides helping us to learn the basic movements of Taijiquan, these 13 techniques also deepen our Taijiquan understanding and practice.

As the 13 techniques are basic, which means very important, they form a foundation upon which all future Taijiquan development depends. How fast and how far a Taijiquan practitioner advances will greatly depend on how well he has practiced these 13 techniques.

If he does not understand the principle of warding off and cannot perform the technique effectively, he will take a long time to learn how to defend himself against even simple attacks. For example, when an opponent throws him a thrust punch, and he blocks it head on, he may quickly move to other patterns or other techniques, but he will take a long time and a lot of effort, as well as much punishment, to be able to defend against opponents’ attacks effectively.

On the other hand, if an opponent throws him a thrust punch, as he knows that blocking the attack head-on is against Taijiquan philosophy, he deflects the attack using minimum force. He may spend more time mastering the technique, but once he understands the philosophy and is able to perform the technique well, he can learn other patterns manifesting the same techniques very fast. This, in fact, is one of the main reasons why our students can achieve much in a short time.

If he does not understand the principle of using his body-movement while remaining at the centre, and cannot perform the technique well, he will not progress far no matter for how long he may practice. For example, whenever an opponent kicks at him, he retreats his steps, with the result that he will be pressurized by a kicking opponent. He may practice a long time and take a lot of punishment, but he may still not know how to counter kicks.

On the other hand, if he has a good understanding and practice of the technique of remaining at the centre by using body-movement, he can shift his body backward without moving his feet, to avoid the kick, and swiftly move his body forward, again without moving his feet, to counter attack as soon as the kick passes. He may spend more time mastering this technique, but once he can perform it well, he can learn many other patterns and techniques within a short time.

So, by practicing the 13 techniques well and understanding their philosophy, because these 13 techniques form the foundation of Taijiquan, a practitioner can progress fast and far. As an analogy, instead of learning how to speak over a telephone, in a restaurant, at a supermarket, on a date, or while working in an office, a students learns the basics of speaking well. Once he can speak well, he can do so in any situation.

The answer to whether any Taijiquan pattern can be classified into these 13 techniques is “yes and no”.

The technique “chen’ or “sink” as manifested in the pattern, “Black Bear Sinks Hips”, for example, is missing in this classification. As we have experienced in our practice, this is a very useful technique. When someone punches at you, you grip his arm using “Old Eagle Catches Snake”, and press him onto the ground. This is an application of the sink technique. When an opponent grabs your leg when you kick him, your respond with an elephant-step and hang your reverse fist on his head. This is also the sink technique.

Another obvious area not covered by the 13 techniques is when you strike, like using “White Snake Shoots Venom”, “Bow-Arrow Thrust Punch” or “Green Dragon Shoots Pearl”. The 13 techniques also do not cover kicks, like “White Crane Flaps Wings” and “Cross-Hand Thrust Kick”.

In such situations, the answer is No. No, there are many Taijiquan patterns not classified into these 13 techniques.

Using the examples above, “Black Bear Sinks Hips” may be classified as “roll back”; “Old Eagle Catches Snake” as grip; “Elephant-Step Hanging Fist”, “White Snake Shoots Venom” and “Green Dragon Shoots Pearl” as press, and “White Crane Spreads Wings” and “Cross-Hand Thrust Kick” as spread. According to their footwork movement, the above patterns may be classified respectively as centre, back, forward, forward, centre, back, centre.

Are we forcing these patterns into techniques that are previously fixed? No, in fact, historically it was from the 13 basic techniques that these later patterns developed, sometimes with modification or variation. It is helpful to remember that kungfu is alive, and this classification is for convenience, and not as compartmentalization to restrict us.

Let us have some fun classifying the patterns of the first sequence of our Wudang Taijiquan set into “eight gates” and “five steps” of the 13 techniques as follows.

The 13 techniques are found in all Taijiquan sets, ranging from the relatively elementary Cloud Hands Grasp Sparrow to the very advanced Wudang Taijiquan. An understanding and practice of the 13 techniques provides us with an introduction to basic Taijiquan movements as well as leads us to its profound depth. 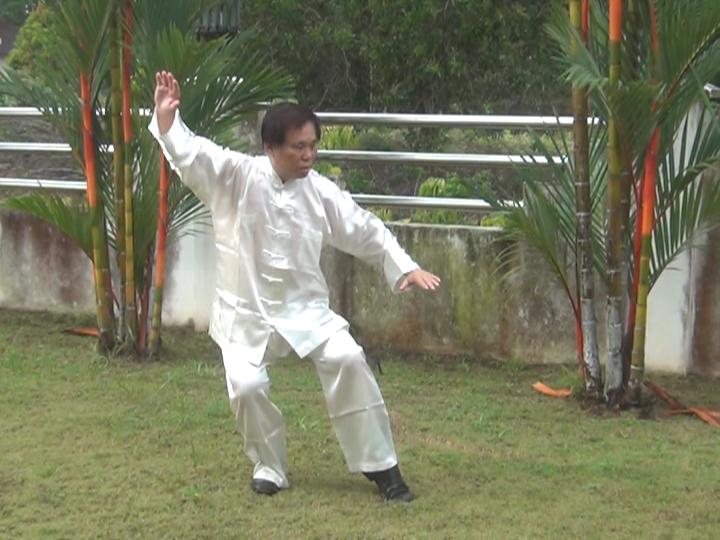