HOW ARE THE FOLLOWING TIGER PATTERNS FROM HOONG KA KUNGFU USED IN COMBAT APPLICATION?

The following two patterns are found in Hoong Ka (Hung Gar) Kungfu. How are they used in combat?

Lam Sai Weng (or Lin Shi Yong in Mandarin pronounciation) was the successor of the legendary Southern Shaolin master Wong Fei Hoong (Huang Fei Hung), from whose lineage much of today's Hoong Ka (Hung Gar) Kungfu is derived. One of the most famous kungfu sets in Hoong Ka Kungfu, and in all kungfu, is "Fu Hok Seong Ying" or Tiger-Crane Double Forms, which specializes on the tiger and the crane features of Shaolin Kungfu. 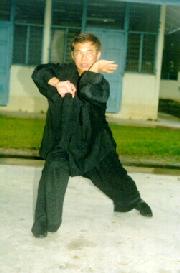 This Tiger-Crane Set is beautiful to watch, but even more beautiful are the combat applications of its patterns, although many kungfu students, including those who have learnt this famous Hoong Ka set, may not know how to use them. Hence, many people mistakenly think that kungfu patterns are merely decorative, good for demonstration but not for combat. This situation is aggravated today when kungfu is often practised like gymnastics or dance and not as a martial art.

This pattern shown on the left is called "Black Tiger Breaks Flank". As its name implies, it drwas inspiration from the Tiger characteristics. It is a Tiger pattern not just because of its external features of using the tiger-claws for its hand forms, but also because of its internal feature of using internal force in its combat application, in what is called in kungfu jargon as 'using bone", in contrast to "using strength".

In the first picture above, Goh Kok Hin and I observe each other in typical poise patterns. In the second picture, Goh attacks with a thrust punch.

I move my front left leg to my left side to avoid the punch. Immediately I grap Goh's right wrist with my right tiger-claw and simultaneously strke Goh's right elbow with my bent left forarm, applying internal force from my left elbow, dislocating Goh's right elbow using the pattern "Black Tiger Breaks Flank". 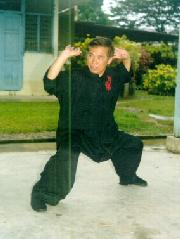 The picture on the right shows the Hoong Ka pattern called "Fierce Tiger Crouching at Cliff". It is understandable if many students wonder how could such a pattern be used for combat. The sequence below shows its combat application.

In the pictures below Goh Koh Hin attacks my left collar bone with a palm chop in a pattern called "Chopping the Hua Mountain". I shift my back left leg a small step backward and deflect, not block, his chopping attack with my left hand.

All the movements described above may look complicated to an uninitiated person, but a trained exponent can, and should, execute them smoothly in a split second. Hence, this innocent-looking Hoong Ka pattern, "Fierce Tiger Crouching at Cliff", may look harmless, but is actually a very effective combative pattern, attacking the opponent at four different places in one smooth action. 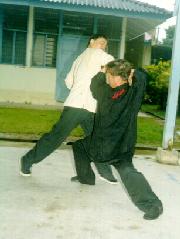 Such a profound pattern is not thought out by some kungfu scholar sitting in an ivory tower, but is evolved through the centuries from actual fighting experience. This is possible only when the fighting system has been institionalized, as in Shaolin Kungfu and Taijiquan, where distilled fighting techniques and skills have been passed down as crystalized forms. Such depth is not possible in systems where exponents fight in a formless manner, basing their responses to combat situations on their individual, and often impromtu, reaction.