Don't the extended arm movements in Choy-Li-Fatt expose the exponent to attacks? 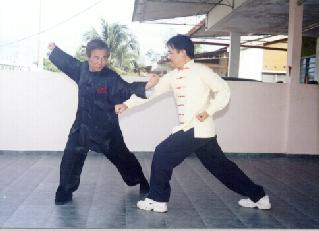 To the uninitiated Choy-Li-Fatt Kungfu may appear exposed, but is actually well covered and very combat effective in the hands of competent exponents.

Choy-Li-Fatt Kungfu is well known for its wide stances and long-reaching techniques. It is so because its early masters, like its founder Chan Harng and its first patriarch Cheong Hoong Seng, being patriotic revolutionaries developed it mainly for fighting against many opponents at the same time in mass warfare. A style that is for short-range fighting, like Wing Choon Kungfu for instance, would be less suitable. Indeed Wing Choon Kungfu and Choy-Li-Fatt Kungfu, both excellent kungfu in their own right, have interesting contrasts.

Would the long-range techniques of Choy-Li-Fatt, which necesitates extending the arms thus exposing the sides of the body, be an innate weakness which an opponent could exploit? Yes, if the student is incompetent, but no if the exponent is skilful. Indeed the frequent swinging of arms in Cho-Li-Fatt techniques could be used advantageously.

Figures 1-3 above show a characteristic example. As Goh Kok Hin attacks me with a thrust punch, instead of blocking or moving away, I swing my left arm onto Goh's arm, shifting my front leg diagonally to my left in the process. Goh's thrust punch is a representative attack. Indeed almost irrespective of what kind of strikes or kicks Goh may use, I can employ a similar downward swing, which can fracture the opponent's attacking arm or leg in just one move. This pattern is known as "Smashing Waves in Whirlwind", Figure 1.

Goh shifts his body back to avoid my downward swinging attack. Instantly I swing my other arm upward, in a pattern known as "Throwing a Ball in Waves", Figure 2, striking Goh's solar plexus. Goh retreats his front leg into a False-Leg Stance to avoid my attack. Following Goh's movement, I move my right leg forward into Goh's stance and swing my reversed fist onto his right temple, using a pattern known as "Reversed Hanging of Golden Lotus", Figure 3.

My three attacks are made continuously as if they are one smooth movement -- like a huge continuous wave overwhelming the opponent -- almost irrespective of his actions. Such a tactic, known as the Wave Movement, can be quite formidable. For more information of this Wave tactic, please see Question and Answer Number 8 of February 2000 Part 3.

Irrespective of the opponent's actions? Yes, unless the opponent is exceptionally skilful or his responses are exceptionally outlandish. The Choy-Li-Fatt exponent, naturally, will have to make appropriate adjustment to the opponent's responses, but the main movements are the same. If this is so, does it mean that one who uses the Wave Movement will be invinciable? Of course not. In kungfu there is no such a concept as an invincible technique, tactic or strategy. Against every technique, tactic or strategy there is at least one, but usually a few effective counters.

Figures 4-12 provide an example of using the Wave Tactic and some Wave-Breaking Techniques. As I swing my arm or fist onto Goh's attacking arm, Figure 4, instead of moving away which would allow me to continue my wave tactic, Goh remains where he is, but drops his attacking arm and using his other hand pushes aside my swinging arm against my intended direction, thus breaking my momentum, Figure 5. Immediately he strikes my left ribs with his right fist, Figure 6. Goh's pattern here is called "Big Boss Offers Wine".

To neutralize Goh's attack, I move my left leg backward into a left False-Leg Stance, turn my body in an arc, and with a circular movement of my left hand reverse the situation where Goh's left hand was "taming" (or pushing against) my left wrist to the situation whereby my left hand "tames" (or pushes against) his left elbow, Figure 7. Continuing the momentum without a break I swing my right fist into his solar plexus, using the pattern "Throwing a Ball in Waves", Figure 8.

Without moving his legs but shifting his body backward Goh avoids my upward swinging attack, and "threads" his right hand upward against my right arm, Figure 9. This is another wave-braking technique, as here Goh prevents me from swinging a reversed fist onto him. Immediately Goh drives a low punch into my right ribs, using a pattern called "Precious Duck Swims through Lotus", Figure 10.

I move my left leg to my left side to avoid Goh's punch, Figure 11, and immediately bring my right leg forward at an angle to Goh's Horse-Riding Stance, and swing a reversed fist at his temple, using the pattern "Reversed Hanging of Golden Lotus", Figure 12.

Whether Wave Movement techniques or Wave-Breaking techniques emerge as the victor depends not on the techniques but on the skills in applying them. In the examples above, I can eventually defeat Goh because I am more skilful; if Goh is more skilful at any one situation in the above sequence, I would be defeated at that situation.