DIFFERENT WAYS OF MOVING INTO AN OPPONENT 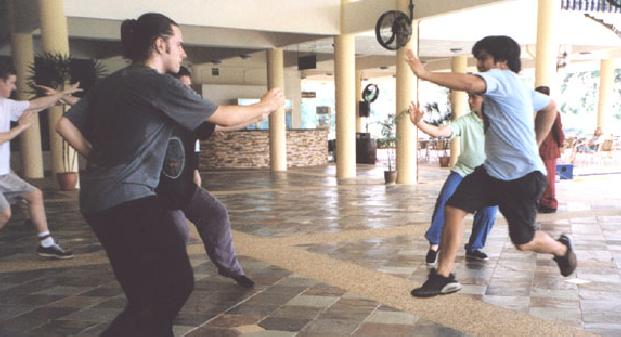 Sifu's son, Wong Chun Nga, flying in from the right to attack me!

The following discussion is reproduced from the thread “Photos from April Intensive Shaolin Kungfu Course” posted by Dan Hartwright in the Shaolin Wahnam Discussion Forum on 8th April 2003.

As some of you may or may not know I have been busy with other forums recently, and as a result of the interaction with the other forums I have some very interesting material that Sifu has written that I would like to share here as well.

I have edited it in small ways to remove parts that are not relevant to our forum.

The following text was an email to me from Sifu where he kindly explains the principles, techniques, and tactics employed by Wong Chun Nga in the above image of Chun Nga and myself.

The other image referred to is the image of 3 modern Shaolin monks shown in the January 2000 Question and Answers Part 1.

Cheen-pou was frequently used by kungfu combatants in the past. Those who have read or heard kungfu stories describing combat would have come across this term often.

They are three factors one must consider when shooting in to attack with cheen-pou, or arrow-step. One, his movement must be fast and agile, preferably moving into the opponent, right in front of the opponent, or in any desired direction (cheen-pou, for instant, can also be used for defence), before the opponent realizes it, or if he realizes it, before he has time to settle down (physically, energetically or mentally).

When one examines Chun Nga's cheen-pou in the said photograph, he can find that Chun Nga has fulfilled all the three important factors well. He is fast and agile, despite his weight! He has good breath control, is well focused and has good balance. These points may not be discernible to the uninitiated, but trained exponents can notice them if they observe carefully.

Notice, for example, that Chun Nga has just taken a breath, and has focused his chi at his chest, which is correct in this case as it will make him “light” and agile. Notice that his muscles are not tensed, and he is elegant and versatile. For example, from this mid-air poise he can change position or direction, such as moving to your right into a side-way Bow-Arrow Stance instead of in front of you, or to your left into a low Unicorn Step, or thrust low into your legs with his left Front-Arrow Stance (a reverse of Bow-Arrow), or if he is agile enough first kick up his left foot to distract you and then to protect his groin, and kick his right toes into your throat.

Most importantly, he is well-covered. Notice his left guard-hand and the scissors-legs. If a die-hard opponent, ignoring his own safety, goes forward to attack Chun Nga's groin, for example, Chun Nga's left leg moving forward would both neutralize the attack and counter-strike the opponent.

This photograph was well taken, snapped just at the right moment. Had the photographer been slower a moment, it would have missed showing the fine points described above.

Chun Nga himself probably does not realize all these fine points in combat. He just performs the technique according to the way past masters have handed down to us, which can be translated as benefiting from all the technical and sometimes tactical advantages generations of past masters have discovered from their actual combat experiences.

You need not worry about these fine points yet. We shall come to them in later parts of your kungfu training, but theoretically knowing them now is useful. As I have often said, all Shaolin combat principles are also applicable in our daily life. For example, by observing an opponent's or a friend's breathing, we can have some idea of his condition. If his breathing is “floating” it indicates he is nervous or agitated, and his thinking is often affected. But if his chi is focused at his chest, yet he is calm, and especially his eyes are enlarged, he is about to attack, physically or verbally. 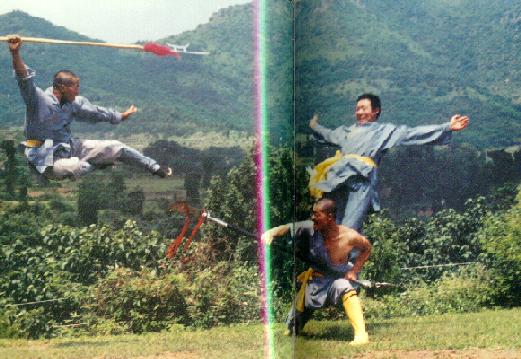 Cheen-pou (arrow-step), as shown by Chun Nga here, is technically and tactically different from “fei-sun”, as shown by the modern Shaolin monk in the other photograph. Fei-sun literally means “flying-body”, and is also one of many ways to move into an opponent. But amongst kungfu combatants in the past, “fei-sun” was less used than “cheen-pou” because it was more exposed.

But fei-sun has some other advantages over cheen-pou, the most obvious is that it carries “momentum-force”. It is therefore often used in “seong-fei thui”, or double flying kicks, against an opponent who is not very skilful, or as a last resort against a very skilful opponent, or against a door or a wall to break it. Double flying kicks, where both legs kick at the same time, are sometimes confused with “lien wan thui” or continuous kicks, where one kick follows instantly after another, like the one I mentioned above that Chun Nga could do to your throat.

The fei-sun demonstrated by the modern Shaolin monk is excellent. He is fast and agile, has good breath control, is well focused, has good balance, and is well-covered (when considered in isolation). He demonstrates skills which are not easy to accomplish, and he must have devoted much time to its training.

Notice his right leg, which covers his groin excellently. Should his opponent grab his left leg, or attempt to attack him in the air, he can turn his body while in the air, pulls back his left leg to cover his groin, and kick with his right leg in any direction where the opponent is. This, in fact, was the technique a Japanese master used on Sigung Ho Fatt Nam, which I think I told you about, and which Sigung overcame so surprisingly that the Japanese master gallantly conceded defeat immediately, yet without on-lookers knowing.

My comment was not against the monk's technique, but against its application, especially when he had a spear in his hand. A spear-thrust is both safer for himself and more destructive for the opponent than double flying kicks. Of course, the main objection against the application was that the opponent had a raised dangerous weapon pointing at him.

In such a situation, and if you are not holding any weapon but you still wish to move in, moving in using cheen-pou is very bad, using fei-sun is much worse — it is suicidal. A good choice is shiu-pou, which literally means “mouse-step”. You inch in cautiously shifting irregularly from left to right, and from front to back, but shoot in with cheen-pou if you see an opportunity and are sure you are definitely safe.

My thanks to Sifu for sharing his incredible wisdom and the details of the photo from his unique perspective with me.