THE TREMENDOUS FORCE OF SINEW METAMORPHOSIS 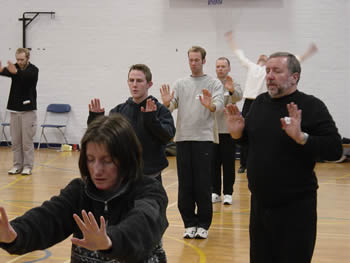 Fluer (in front) and other students performed “Pushing Mountains”

The following discussion is reproduced from a thread on The Tremendous Force of Sinew Metamorphosis at the Shaolin Wahnam Discussion Forum posted by Fluer on 17th September 2003 in response to Dan's asking "why exactly is so much internal force generated by the very simple looking exercise flicking fingers from Sinew Metamorphosis, and how can so much internal force be generated by flicking as little as 3 times on some of Sifu's courses!"

I can certainly relate to Phil's 'explosive' experience. Practising at home once, I felt so powerful after the exercise that I felt like I had a rocket engine strapped to my back, and was about to blast through my living room ceiling! During Sifu's last course in London, I had a similar experience, but somehow on a higher level — the rocket would have been superfluous. Beyond the feeling of power, there was an instant propulsion into a realm of freedom and spiritual joy.

I had never really thought before about why the exercise generates so much internal force — I was just happy that it did! So, just to speculate: maybe when we assume the starting position, our energy (and intent) is marshaled at the hands, and instead of being projected externally, for combat or healing, flows back into us in a very concentrated way when we flick the fingers. But just as importantly, this exercise epitomizes the principle of "simple, direct and effective". Apart from Standing Zen, perhaps the only thing that matches it in this respect is smiling from the heart, which to me is the cornerstone of our practice.

I'm not surprised that Sifu's students can now achieve just as good results by flicking the fingers 3 times, as they used to by flicking 49 times. I have noticed a marked distillation of his teachings even in the year or so that I have been training with him. For example, he gives fewer instructions for each exercise, so that there is less to worry about, resulting in the instructions and advice that he does give having even more power. Just one remark by Sifu on the Brighton Chi Kung course last December started a process that led to a real breakthrough in my practice. I have no reason to believe that this same distillation hasn't occurred in his transmission of the skills for Sinew Metamorphosis. In fact, Sifu mentioned in a recent Q&A that, over the years, his methods of teaching have improved beyond even his own expectations. 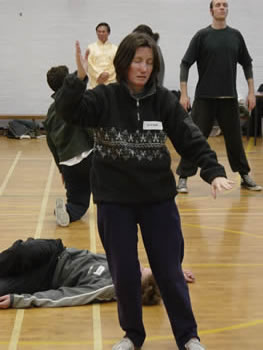 Fluer and other students were enjoying a chi flow during a chi kung class while Sifu Wong looked on from behind. Some movements could be vigorous or comical. One studnet, for example, was lying blissfully on the floor.

The word "sinew" used to have a wider meaning, akin to moral fibre and resilience, and these seem to me to be essential characteristics that the exercise cultivates — even more so than powerful arms or a sharp mind! I remember Sifu explaining, during my first course with him in Bath, that practising Chi Kung, and in particular Sinew Metamorphosis, will help us to be courageous, one of the qualities of the Scholar Warrior ideal that many of us aspire to. I was surprised that I began to notice a general increase in courage immediately after the course, and I have had recourse to rely on it a few times since when I have been faced with challenging situations.

Apologies for the long post -- writing at such length has made me realize I don't practice Sinew Metamorphosis nearly enough. I think that perhaps I'm in a bit of a comfort zone with Lifting the Sky, because I love it so much! So I'm resolved to do, not just talk and incorporate it into my training routine on a more regular basis.

Best wishes to all,