The following discussion is reproduced from the thread How can I phrase this I really want to know! in the Shaolin Wahnam Discussion Forum on 24th October 2005.

Speed is not necessarily related to big flashy movements but to the speed and efficiency at which a move is neutralised or initiated / completed. What looks fast is often actually slow and vice-versa.

As promised, here is a a "short" discussion of Shaolin Kung Fu combat philosophy

I am not sure if Kin Tama will learn anything (or if he wants to) from what I am about to present, but nevertheless I hope at least others will find this useful.

For those who only have time to skim I have highlighted some important parts of this somewhat long post.

I would like to emphasize that what I am going to explain here are actually Kung Fu secrets. But as a token of goodwill and our sincere effort to share, Sifu Wong has kindly consented to my explanations being made public. 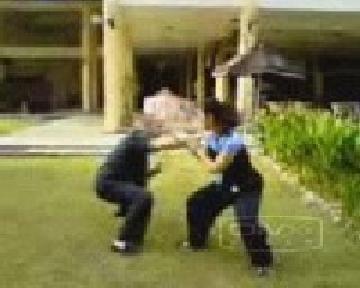 Sifu Emiko deflects Sifu Kai's attack
Kin Tama has repeatedly stated that our sparring in the videos is of a "horrendously low standard", I don?t know for sure on what grounds his opinion was formed as his writing has been so confusing.

I assume he formed his opinion based on the following three points which he stated at various times:

Not only are his three points incorrect, they also show the shallowness of his own combat philosophy. Let me use the free sparring clip between my Sihing Kai and Sije Emiko as a reference for illustration.

But let's move on. 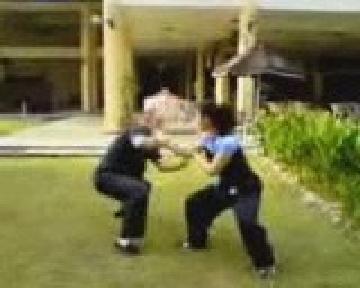 In lightning speed, Sifu Emiko counter-strikes Sifu Kai applying the tactic 'Flowing along the Bridge'
We were actually surprised when Kin Tama said the sparring of these two international champions was slow and of a low level. To us their sparring was fast and of a very high level. We therefore concluded that either Kin Tama had no sparring experience or simply wanted to find faults.

Speed is not necessarily related to big flashy movements but to the speed and efficiency at which a move is neutralised or initiated/completed. What looks fast is often actually slow and vice-versa. Often force is also sacrificed for apparent speed. Even the "fastest" moves are useless if there is no force to back them up! Experienced exponents look beyond the "obvious" and "superficial" and therefore see what is really there.

Kai and Emiko were very fast at times although there were little movements and their speed not obvious -- two further important secrets in combat philosophy -- because they employed the tactic of "flowing over the bridge". For example, when Kai attacked Emiko she "leaned" (not blocked) her forearm over his attacking arm to deflect it away and simultaneously counter-attacked. This was using the principle of "starting later but arriving earlier".

A less experienced fighter would have been hit at a time just when, or just before, he had completed his own attack. But Kai is a very experienced fighter. He used the same tactic of "flowing over the bridge" to deflect Emiko's counter-attack. This was much faster than blocking or moving away as well as being far less conspicuous.

Simultaneously Kai gripped Emiko's wrist and struck at her ribs with his other hand. A lesser fighter would not know what to do. They would not be able to block with either hand, nor to move away to dodge. Note that Kai was attacking on two fronts -- a strike at the ribs as well as the less conspicuous tiger claw grip on vital points on the wrist. 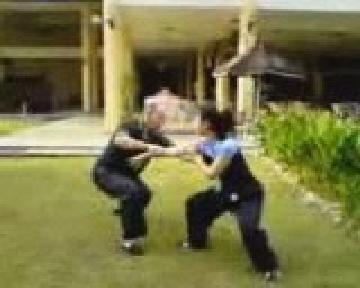 In lightning speed too, Sifu Kai grips Sifu Emiko?s wrist and simultaneously counter-strikes at Sifu Emiko?s ribs
However, Emiko is also a very good fighter. She turned her wrist and pulled back her elbow employing the pattern called "Hiding Flowers in the Sleeves". With just one move she neutralized both of Kai's attacks. Once again she immediately counter-attacked. It is also not true that Kai and Emiko "merely moved backward and forward". In fact they stayed at their stances and employed excellent body work, which was much faster than bouncing about or moving sideways to counter-attack, something that Kin Tama obviously does not know or even see. The tactics Kai and Emiko employed are far superior to moving sideways to counter-attack. Moving sideways is not only slower, it also offers a weakness for the opponent to exploit. It takes two movements -- one to move sideways, and another to strike. While in the process of moving, before the moving leg touches the ground, it also offers an innate opportunity for a counter-strike. Lesser fighters may not be able to exploit, or even notice, such an advantage but experienced fighters like Kai and Emiko can.

It would be much safer for defence and more effective for attack to use footwork, bodywork and hand movement. In Kung Fu terminology this is "the three harmonies" -- the harmony of the legs, body and hands. Again refering to the example in the video clip -- as the opponent attacks, you needn't move back nor sideways. By appropriately adjusting your bodywork you can deflect the on-coming attack, simultaneously counter-attacking and striking the opponent when he least expects it --- all in a single movement. 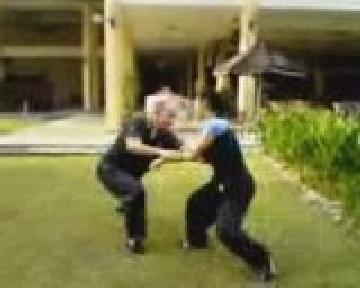 With a twist of her wrist, Sifu Emiko pulls back her arm, thus neutralizing a seemingly hopeless situation of Sifu Kai?s double attacks
There are many other "open secrets" even in this short video clip. Rather than describe all of them, I would like to briefly mention two or three.

Kai's use of his leg to deflect Emiko's attack to his groin was excellent. Emiko distracted Kai at the top whilst kicking him below. Kai sensed the kick without having to look at it and, thus, effectively brushed it away. Kai attacked Emiko's throat when she was in a low stance which made it difficult for her to move away. But Emiko avoided the attack by "merely" turning her head. All these examples of attack and defence are also demonstrations of speed.

It is also interesting to note the big difference in size between Kai and Emiko (which becomes more obvious at the end of the clip). This indicates that size is not an important factor in real Kung Fu fighting. But, when Kin Tama declined the offer of free sparring to show his high level, he implied that being heavy would be an advantage. This further revealed his lack of Kung Fu combat philosophy.

Immediately Sifu Emiko counter-attacks, which Sifu Kai neutralizes by sinking his stance backward. All these movements happen in just a second or two, and are inconspicuous to many people. Notice that by an excellent application of body movement, the two combatants do not need to move their feet, which further enhances their speed in attack and defence.