CAN WE LEARN CHI KUNG AND KUNGFU FROM BOOKS, VIDEOS OR E-MAILS? 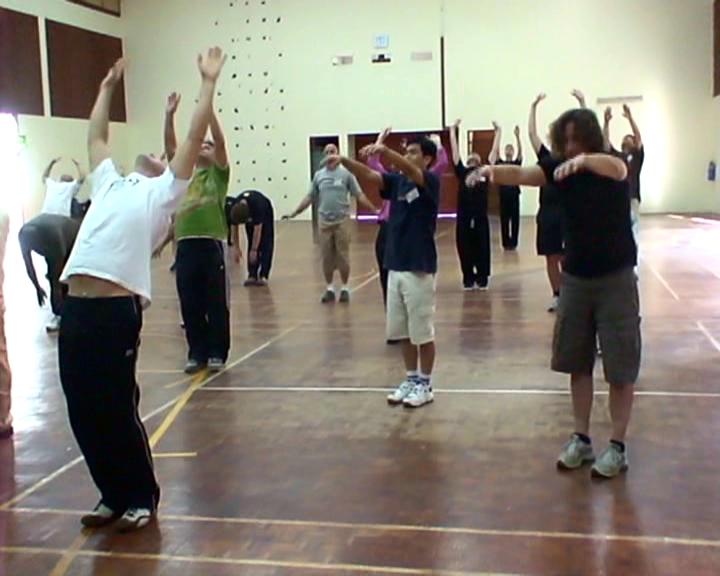 Can we learn chi kung and kungfu from books, videos or e-mails? The answer is yes, no, or yes and no. There is no play of words, but it depends on an interplay of the following three factors:

If the chi kung or kungfu exercise is just a simple form, it can be readily learnt from a book, a video or even an e-mail. This is what most people have in mind when they think of learning chi kung or kungfu from books or videos.

More than 80% of chi kung and kungfu (including Taijiquan) practitioners fall under this category, and most of them do not realize it. Some vehemently, and to them righteously, insist that what they practice is chi kung or kungfu.

All chi kung and kungfu techniques involve skills, though many people may overlook these skills. One may perform the outward form of "Lifting the Sky" correctly, but if he is tensed or intellectualizing, he is not performing it as chi kung. One may perform a kungfu technique beautifully and even theoretically know its application, but if he does not have good spacing and good timing, he would not be able to apply it for combat.

When an exercise involves some specific skills, it is difficult, if not impossible, to learn it from books, videos or e-mails. For example, in Abdominal Breathing, one needs to breathe energy (not just air) into and out of the abdomen. In One-Finger Shooting Zen, one has to channel energy to his index finger. These skills need to be learnt from and practiced under the supervision of a competent teacher.

The second factor is the book, the video or the e-mail involved. Obviously, if the instructional medium presents its material clearly and systematically, it is easy for a practitioner to learn it, unless the techniques are complicating or they involve specific skills. But if the instructional medium is concise or arcane, as most chi kung and kungfu classics are, it is difficult, if not impossible, even for seasoned practitioners to learn from it. 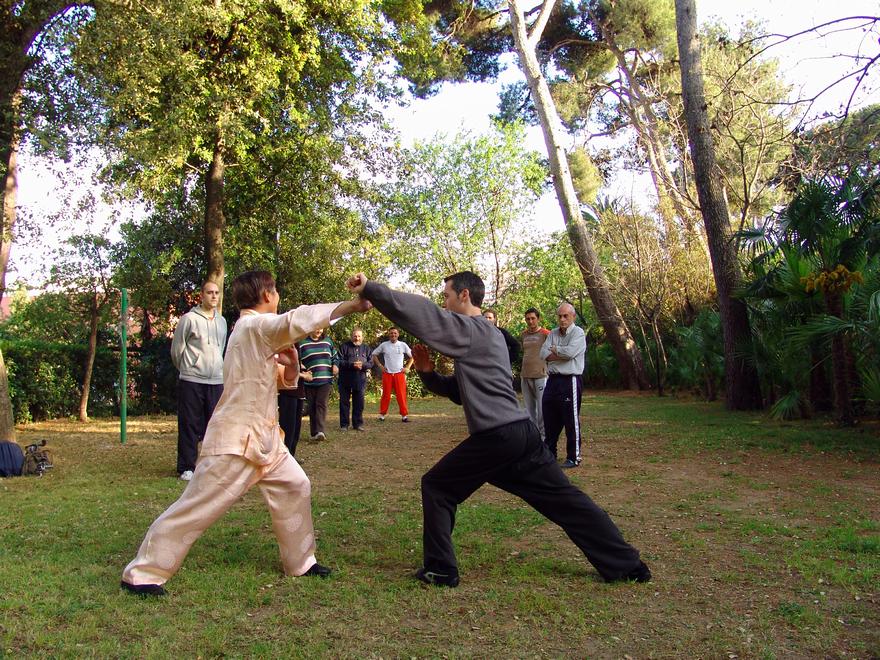 Please bear in mind that the classification is for convenience; there is often much overlapping.

The videos in my websites showing kungfu sets and combat sequences for students to learn before they attend respective courses are good examples of teaching manuals. Our students would have no difficulty learning them as they have the required skills.

Other people outside Shaolin Wahnam will also be able to learn these sets and sequences if they want to. But, unless they are already masters, they will not be able to attain a similar level as that of our students. It is because not only they are unlikely to appreciate the functional beauty of the sets and sequences as our student do, they also lack skills like energy flow and heightened state of mind that are characteristics of high-level kungfu.

Videos shown after some particular courses, like the Intensive Shaolin Kungfu Course and the Flower Set Course, are good examples of review material. Those who have attended the courses, will find the review material very useful.

Some of the review material, especially videos showing early lessons of the Intensive Shaolin Kungfu Course and Intensive Taijiquan Courses, can also be used as teaching manuals, including by people outside our school. If people can learn from the review videos, does it follow that they do not need to attend the courses?

No, it is not so. If they can learn from the videos or other teaching media, they will have more benefit from their kungfu training. But this benefit is nothing compared to the benefit they would get had they attended the courses. Even leaving aside a lot of material covering close secrets not shown to the public, but focusing only on public videos, other people only learn the form (including the form of combat application), but course participants not only learn but actually practice the skills, application and philosophy. You would have a better idea of the comparison if you consider that despite literally a sea of public material on kungfu application on the internet, most kungfu practitioners today cannot use their kungfu techniques in combat.

Books, videos and other media that are meant to be records for posterity are not suitable material for self-taught training, unless the practitioner is already a master. What many students do not realize is that many chi kung and kungfu classics belong to this category.

Let us take the often-mentioned classic, "Shaolin Seventy Two Arts", as an example. The first art from my copy (in Chinese, reproduced from the Shaolin Temple) is known as "Art of Six-Word Stance". I translate the instructions as follows:

The instructions are accompanied with a poem, translated literally as follows:

Please note that the spellings of the sounds are in Cantonese pronunciation, which is closer than Mandarin to Chinese spoken in the past. Even if the sounds are pronounced correctly, which is unlikely, there is the question of tone, which baffles most Westerners.

Hence, learning the "Art of Six-Word Stance" from books is out of the question. On the other hand, unless one has received direct oral transmission from a competent teacher on this ancient art, he should not teach it to others. Worse, bogus masters who have not learnt this art correctly may try to impress others by citing the relationship between these sounds with colours, seasons and internal organs, without actually knowing what it means. 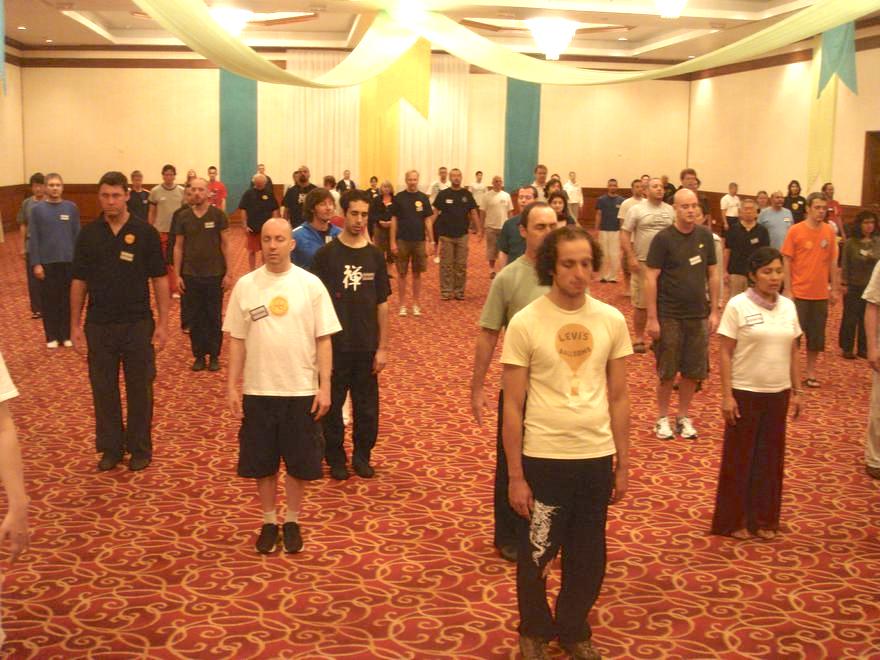 Specific skills, like activating a small universal chi flow, need to be learnt personally from a master

You can also find some records for posterity in my website, such as the list of 72 Shaolin Chin-Na Techniques at Shaolin Seventy-Two Chin-Na Techniques and the poetic couplet of the Flower Set at the Shaolin Wahnam Dicussion Forum, which is reproduced below:

The third factor in the interplay deciding whether one can learn chi kung and kungfu from books, videos, e-mails and other media is the practitioner himself. Again using Dr Damian's rule of three, we may conveniently classify practitioners into three categories:

It is difficult, if not impossible, for beginners to learn chi kung or kungfu from books, videos and other media. They may, with some effort, learn chi kung or kungfu external forms, but not the real art. In other words, they may know the techniques, and sometimes even perform them beautifully, but they would not obtain the benefits these arts or exercises are meant to give. Even students learning from live instructors miss the essence of chi kung and kungfu, what more will be those who learn from books or videos.

Intermediate students should have no problem learning chi kung or kungfu exercises of basic to intermediate levels from books, videos and other media, but they may have some difficulty learning high-level chi kung or kungfu that require special skills. For example, students in our school can learn most chi kung exercises from books or the internet, and probably perform them better than practitioners of the respective schools themselves.

Other people may think we are boastful making such a statement, but it is true. This is because most other practitioners practice these techniques as gentle physical exercise, but our students practice them as chi kung. Similarly, our students can learn kungfu sets from books or other media, and can apply at least some of the kungfu patterns in these sets for combat, whereas other practitioners who attend regular class may perform the external forms of the sets more beautifully than our students do, but they cannot apply them for combat.

An example in kungfu is "San Zhan" or "Three Battles" of Wuzu Kungfu. If our students or other people want to learn the external form of the set, they can readily do so from books or videos. But if they want to use the set to develop internal force, or to appreciate the profound secrets hidden in its stark simplicity, they will have to learn it from a competent teacher.

Advanced practitioners, like our instructors, would not have such problems. If the secrets are revealed to them, they would be able to apply the secrets to the chi kung or kungfu exercises which they learn from books, videos or other media, to derive the desired benefits. This was why secrets were greatly sought after and highly valued by masters in the past. Once they knew the secrets, they could practice on their own to derive the desired results.

This also explains why our instructors can much help our students in their selective sets, even when the instructors themselves might not have previously learnt the sets. Because of the instructors' scope and depth in understanding and practicing chi kung or kungfu, they are able to view the sets in ways their students are unable to. 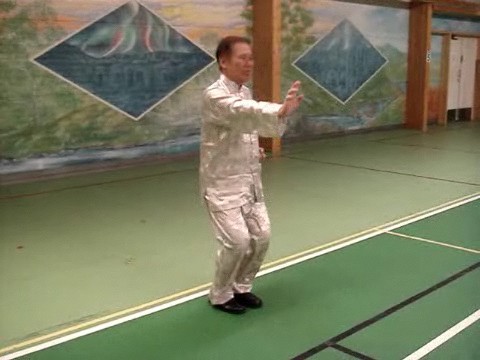 From books or videos, one may learn the form, but not the skill in generating internal force