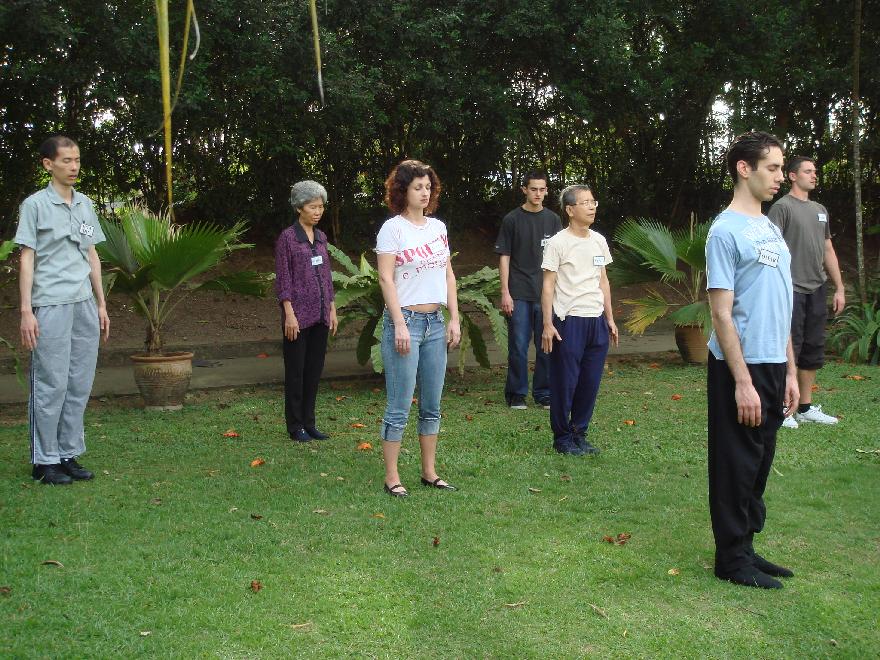 Standing Meditation is an excellent way of spiritual cultivation

This is an excellent question that can benefit many people. A lot of people equate spiritual cultivation with moral development. They think that a highly spiritual person is also morally upright. This is not necessarily so!

A highly spiritual person is not necessarily morally upright or not necessarily religious, and vice versa, because spiritual cultivation, moral education and religious development are three different issues, though they are connected.

The terms are self-explanatory though, surprisingly, many people are confused over their meanings.

In modern scientific culture, spiritual cultivation is cultivating the consciousness, often resulting in developing psychic or extra-sensory powers. A psychic, for example, may be able to tell where lost objects can be found.

In kungfu culture, for example, betraying one’s sifu is considered a worse crime than raping a woman. To a samurai, failing to carry out the instruction of his master was far worse than killing people. At present, consensual extra-marital sex is morally acceptable, though it was taboo in the past in both Eastern and Western societies. But irrespective of cultures, people and times, certain actions, like betraying one’s teacher, raping a woman and killing people, are considered immoral.

The assumption that if a spiritual cultivator cultivates correctly, while aiming at Enlightenment, immortality or good health, he (or she) automatically or intrinsically will become morally upright, is not valid. This is because spiritual cultivation and moral education are two different disciplines.

The second point is that these cultivators have been successful in their spiritual cultivation while aiming at Enlightenment, immortality or good health, yet some of them may become evil, like becoming black magicians. Some, like modern psychics, may not be morally evil, but they lead miserable lives, like attempting to commit suicide which indicates that their lives are not happy.

Why is it that by being evil, a cultivator would be prevented from attaining Enlightenment, immortality and good health?

To attain Enlightenment, or in Western terms to return to God the Holy Spirit, not only the cultivator must not have any evil intention, he must also not have any good intention. Any intention, regardless of good or evil, will initiate the process of differentiation and abide him to the phenomenal realm. The supreme Cosmic Reality, or God the Holy Spirit, is undifferentiated. If a highly spiritual being has great compassion, for example, he will remain in the phenomenal realm as a Bodhisattva, and will not become a Buddha.

In supreme Cosmic Reality, there is no differentiation. There are no immortals, no heavenly beings, no abodes and nothing else. There is only an undifferentiated spread of energy, or God the Holy Spirit.

To attain good health, one must have good thoughts. Evil thoughts may cause energy blockage, resulting in poor health. For example, because of his evil thoughts, a black magician, despite being spiritually powerful, is not peaceful and happy, which indicated poor emotional health.

Because of such wisdom, spiritual cultivators must have a strong moral foundation before starting their spiritual cultivation. We benefit form this wisdom. Hence, in our school all students must be abided by and practice the Ten Shaolin Laws, which act as a practical way to moral education.

Amongst other benefits, holding high moral values, like respecting the master as in the first of the Ten Shaolin Laws, is for the students’ interest. If he does not hold high moral values, he may not be able to attend good health in this life, go to heaven after this worldly life, and attain Enlightenment or described by different terms in different cultures.

We are proud that spiritual cultivation and moral education are very important aspects of our training.

The questions and answers are reproduced from the thread 10 Questions on the Essence of Spiritual Cultivation in the Shaolin Wahnam Discussion Forum.