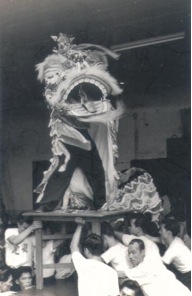 There was, however, one occasion in my long learning process that I deviated from my father’s advice. Our kungfu class was preparing for a charity performance at New World Amusement Park. My master himself would perform the lion head, and everyone had expected me to perform the tail. Performing the lion tail is an extremely demanding role, for the performer has to arch his back throughout the whole performance, which in those days might last longer than an hour, and to extend both his arms in a continuous wing-flapping movement to support the covering tail-cloth.

I tried to be smart. Just a few minutes before the training session began, I went out from the training hall, pretending to buy titbits for my seniors, a bluff that I could easily do because running errands was my common unofficial task. I knew my master couldn’t wait. If I could stay away for just a few minutes, I thought, some unlucky fellow would take over my job as the inevitable tail performer, even for that training session only. And true enough, when I returned after the lion dance practice had started – something that I could time easily as the loud accompanying lion dance music could be heard from far away – I found my master and my junior classmate, Ah Weng, doing the lion head and tail. "Kit Chye," my classmates asked in bewilderment, "where on earth have you been? Uncle Righteousness was looking all over the world for you." "What for?" I pretended to ask. "What for! To be the tail, of course."

"Ha, ha!" I laughed inside myself. "Why pick on me all the time? Luckily I'm not stupid, and now I can have a break from this wearisome task. Now this poor Ah Weng can have a nice taste of back ache."

But Ah Weng had the louder laugh. "Ha, ha!" He probably said to himself, "now at last I have a break into this lion dance role which I have been longing for, for so long."

And he performed the tail so enthusiastically and so well that he was not only asked to continue in subsequent practices, but was ultimately chosen to partner my master in that charity performance, and later in other performances. Hence my monopoly as my master’s partner in lion dance was now broken – all because of my clever trick.

Ah Weng continued to learn and practise hard, and progressed tremendously, often at my expense for what my master might have taught me, he taught Ah Weng instead. Ah Weng also became one of my master's favourite disciples, and was the one who had learned the most lion dance skills and techniques from my master. He later became a famous lion dance artist, bringing name and glory to our school. I am very proud of Ah Weng's achievement. I also learned a very good lesson from that occasion when I tried to be too clever -- a lesson that has greatly helped me in my later kungfu development. From then on, I always learn humbly and practise diligently, never be deterred by hardship or obstacles in the way. 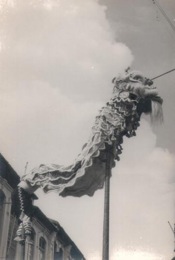 During a charity performance in the 1960s, I went up a long pole to collect Sky Green