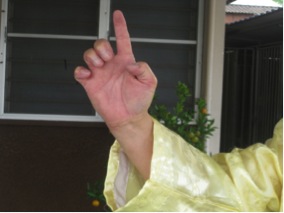 My sifu also told me a story of how he used chin-na from One-Finger Shooting Zen to defeat a Taekwondo master.

My sifu was teaching One-Finger Shooting Zen to a class when a Taekwondo master came in. He watched my sifu teach for a while, and asked my sifu.

"What's it that you are teaching?"

"Can it be used for fighting?" He asked.

"Of course," my sifu said. "Every technique in Shaolin Kungfu can be used for fighting."

The Taekwondo master looked puzzled. "Can you show me?" He asked.

"Yes," my sifu said. He asked his students to move aside, and then told the Taekwondo master, "Now you can attack me in any way you want."

The Taekwondo master gave my sifu a fast side kick.

"This is not a choice pattern in his situation but I want to use the same Tiger-Claw pattern in the One-Finger Shooting Zen sequence to show him there is combat application in what we are training," my sifu added. 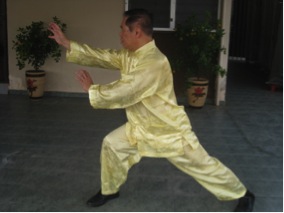