HOW SHAOLIN KUNGFU WAS TRANSMITTED TO OUR SCHOOL 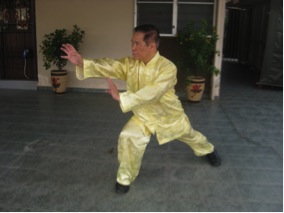 The Venerable Jiang Nan fled south, crossed the Chinese border into Thailand, and kept going south. He had only one mission in life, that was to pass on the Shaolin arts to just one trusted disciple. He was very strict in selecting his successor. He was about 30 of age when he escaped from the burning temple, and after about 50 years of searching, when he was about 80, he met my sigung, Yang Fatt Khun (杨法坤).

Yang Fatt Khun was about 30 then, and was a travelling medicine man in what was then southern Thailand. But in a treaty in the early 1900s, the Thai ceded it to the British in what is now Kelantan in Peninsula Malaysia. To attract crowd, Yang Fatt Khun would first perform some kungfu and demonstrated some feats like piercing a potato with a straw or having a slab of granite broken on his chest. These are actually stuntman shows to attract crowd, and not real kungfu.

“Why do you want to learn these feats?” My sifu asked me.

“It’ll be interesting for demonstration,” I replied.

“These are stuntman shows,” he said. “Don’t waste your time on them. Spend your time to practise genuine kungfu,” he reprimanded.

Although my sigung, Yang Fatt Khun, performed stuntman shows, I had no doubt that his kungfu was genuine and effective. Where he operated were Muay Thai fighters, and Muay Thai fighters would not let a medicine man demonstrating kungfu go unchallenged. Many Muay Thai fighters had challenged my sigung, and he had defeated them readily. The type of kungfu my sigung practised was Fengyang Kungfu (凤杨拳), which was famous for its Phoenix-Eye Fist.

For seven nights, the Venerable Jiang Nan watched Yang Fatt Khun perform his kungfu, demonstrate his feats and sell his medicine. Then on the seventh night, after the crowd had dispersed and Yang Fatt Khun was packing his apparatus to prepare to leave, the Shaolin monk walked towards the young man and said.

“Young man. The crowd applauded your performance of kungfu. But it was no good. It was only good for demonstration!”

Yang Fatt Khun was very surprised. The monk was about 80 with long white beard, but upright like a stature, a voice like ringing bell, eyes sparkling and vitality of a young man.

Before Yang Fatt Khun could say anything, the monk continued.

“Don’t take my words for granted. The test of kungfu is fighting. Let us have some friendly free sparring to see if your kungfu is good. I shall wait for you to pack your things. Then we find a suitable place to spar.”

So Yang Fatt Khun packed his things and led the monk back to his hotel. At the back of the hotel where nobody watched, they sparred.

At first, Yang Fatt Khun hesitated to use force or speed, out of respect for the monk’s old age.

“Fight your best,” the monk commanded.

They sparred, and sparred and sparred. But all the time Yang Fatt Khun found himself simply overwhelmed. He did not actually know what happened. The old monk just handled him like a child.

Yang Fatt Khun knew that there was no doubt the old monk was a rare kungfu master. He knelt down, kowtowed, and begged, “Sifu, please accept me as your student.” It was only later that my sigung found out the Venerable Jiang Nan was the last of real Shaolin monks from the legendary Shaolin Temple.

The old monk gently touched the young man’s head. “There’s one condition,” the monk said. “Wind up your medicine business, follow me up a mountain, and start afresh.”

There were actually three conditions in one. The last condition, start afresh, has become standard in our lineage. No matter how accomplished a student may be, he starts afresh when learning from us. 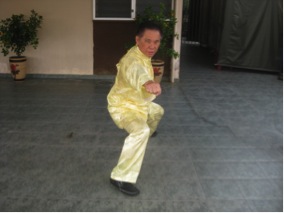 Southern Shaolin Kungfu from the Shaolin Temple at Quanzhou