TELL US ONE OR TWO SECRETS 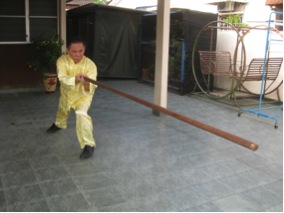 One night, at Sifu Choe Hoong Choy’s house where he taught Wing Choon Kungfu in the garden at the back of his house, Uncle Cheong, a senior disciple of Sifu Choe Hoong Choy and well-respected kungfu master in his own right, visited the school. Some senior students were practising a staff set called Thirteen-Techniques Spear. Despite its name, it was a staff set, and a long tapering staff was used.

Uncle Cheong said, “It can be used to block a low sweeping attack.”

He then asked the student to sweep his legs and he blocked the attack using this pattern, “High Mountain Flows Water”.

Uncle Cheong then turned to me. “Kit Chye,” he said, “How would you use this pattern to block a low sweeping attack?”

“Kit Chye” (杰仔) was the name they called me. Other students would call me “Kit Kor” (杰哥), which means Elder Brother Kit. “Kit Chye” is an endearing term, often used by parents to call their children or elders to call their loved ones. It means “Kit, my lovely boy”.

“Uncle Cheong is an expert of the staff,” I replied indirectly.

“I know you are also an expert of the staff. Tell us one or two secrets.”

“I’m not sure whether I can tell one or two secrets.”

Uncle Cheong then turned to Sifu Choe Hoong Choy. “Sifu, would you let Kit Chye to reveal one or two secrets?”

“They are senior students. There’s no harm telling them one or two secrets,” Sifu Choe Hoong Choy said.

I took over the staff from Uncle Cheong, and asked the senior student to attack me with a low sweep.

As he did so, I blocked the attack as Uncle Cheong did earlier, but with the end of the staff gently hitting the attacker’s lower leg.

I asked him to attack again. I performed the same pattern blocking his attack, but this time with the tip of the staff pointing just an inch above a vital point between his lower leg and his foot.

“In a real fight,” Uncle Cheong told the student, “Your lower leg would be fractured as soon as you make the attack, or you would not be able to walk as your vital point at the foot would be dotted.” 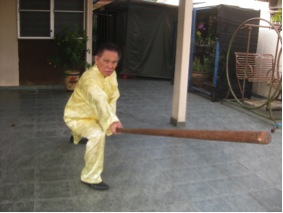