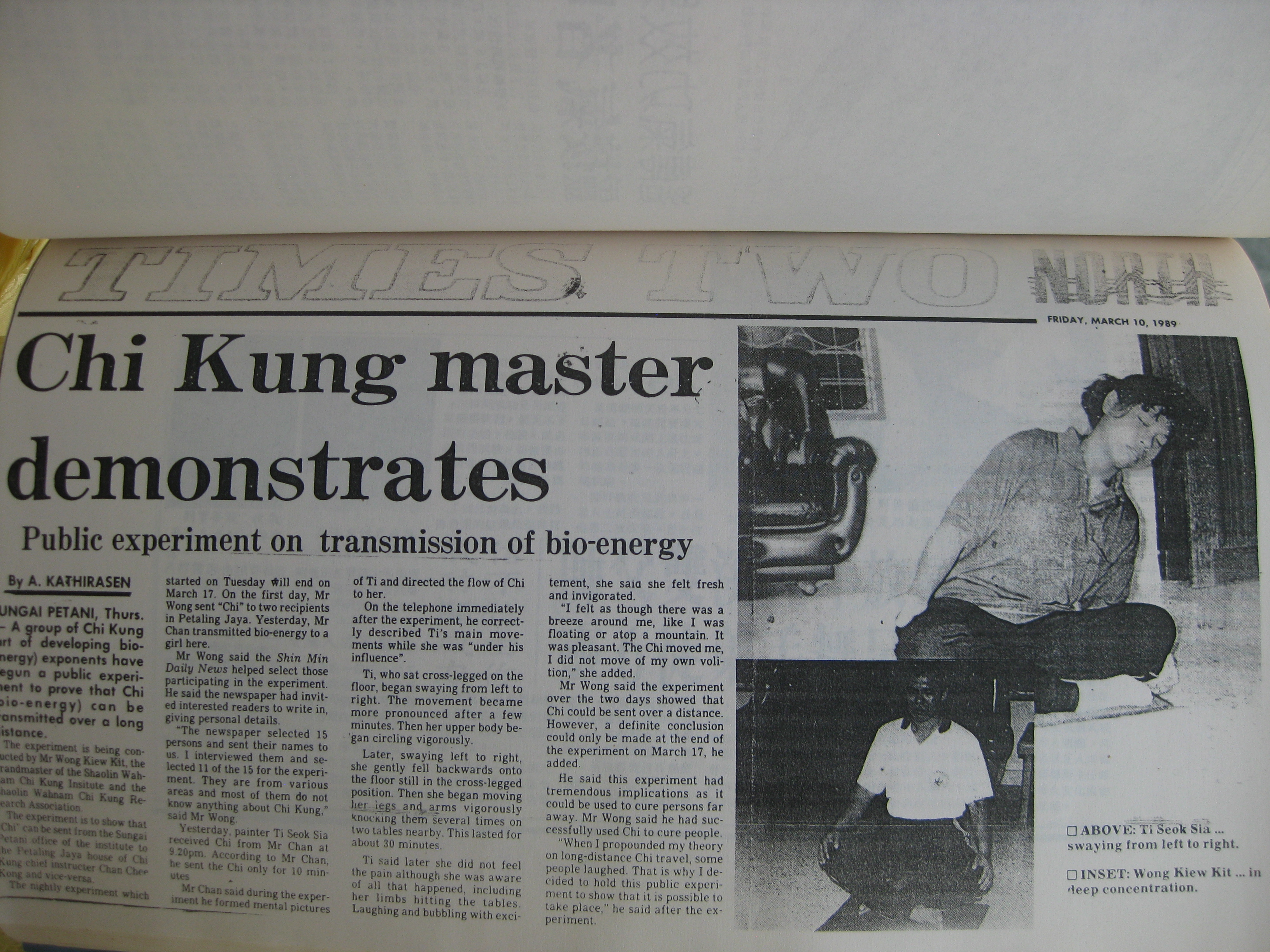 Can you tell us a bit more about distant chi transmission and how we as a society can utilize these principles in our daily awareness? What benefits are provided for humanity if we utilize its practice in our daily practice?

In 1989 I did the “impossible”. I transmitted chi or vital energy from Sungai Petani to Kuala Lumpur about 350 kilometres away to members of the public selected by a national Chinese language newspaper to prove that distant chi transmission was possible.

Earlier I made an announcement that it was possible to transmit chi over great distances. This statement was made in support of a great chi kung master in China, Sifu Yan Xin. who conducted experiments on distant chi transmission, but many people did not believe it was true.

My statement immediately started a great controversy. Many people, including established masters, attacked me. In response I offered myself for a public experience. A national Chinese newspaper in Malaysia took up the offer.

The newspaper invited the public to volunteer to receive chi from me. A lot of people volunteered, and the newspaper selected a few groups for the experiment over a month. At appointed times, I transmitted chi from my chi kung centre in Sungai Petani to different groups of people in appointed places in Kuala Lumpur with prominent members of the public, including some kungfu and chi kung masters, chosen by the newspaper to act as witnesses in both the transmitting and the receiving centres.

The experiment was a resounding success showing that distant chi transmission is real. All the volunteers, many of whom have not practiced chi kung before and most of whom I have not met, moved in chi flow as a result of my distant chi transmission. On many occasions I could correctly describe how the volunteers moved, and this was immediately confirmed by witnesses in Sungai Petani and Kuala Lumpur over telephone.

In private I transmitted chi over great distance on many occasions to save lives. Someone, usually a student or a family member or close friend of a student, was dying, and it was not in time for me to arrive in person to help him or her with chi kung healing. So I transmitted chi over great distance to help. In all cases the recipients clearly felt that they received my chi. I am happy and proud to say the majority survived, learned chi kung from me later on and lived well. A few, unfortunately, die but they reported a better quality of life after receiving distant chi transmission.

A few occasions were very interesting. On one occasion when I transmitted chi from Barcelona, two of my disciples, Sifu Rama Roberto and Sifu Jeffrey Segal, who are Shaolin Wahnam Chief Instructors of Latin America and of Australia respectively, were with me. Sifu Jeffrey later reported that he saw a huge column of energy white in colour rising from my head like a huge hat. Sifu Rama reported that he felt tremendous heat radiating from my body.

On another occasion my students took me for supper after a chi kung class in Alor Setar in Malaysia at a time when I was supposed to transmit chi. I told my students to carry on with their food and leave me alone. I sat at the same table with them, closed my eyes, entered into a meditative state of mind and transmitted chi.

Later the recipient told me that he smelt a very funny aroma. At first we could not make out what that aroma was. Then suddenly I realized that at the time of chi transmission, a hawker was frying noodles over a huge fire and all of us at the table could smell the aroma. The molecular structure of the surrounding energy, not the energy itself, was transmitted across space to the recipient!

On another occasion I was in Toronto transmitting chi to a recipient in Rotterdam. Later the father of the recipient telephoned to say that his daughter did not receive chi at the appointed time, but at another time. The owner of the house where I was staying told me that her clock had stopped, and when we worked back the time, we found that the recipient received chi the time I sent it.

It is also interesting to point out that the father who was monitoring his daughter reported that each time she received chi, the deadly viruses infecting her dropped tremendously. After a few distant chi transmissions she was free from the viruses.

How does distant chi transmission work?

The Cosmos is a body of chi or energy. In other words, the space between me and a chi recipient, regardless of the distance in between, is not empty but full of chi. In my meditative state of mind, I can send energy impulses along this body of chi to the recipient.

Hence the chi reception is immediate. The recipient receives the impulses which he interprets as my chi the instant I send it. It is faster than sending chi physically to a person in front of me. Indeed I did an experiment with some students who were senior executives of an international corporation.

They arranged with some friends in the United States who received my chi sent by distant chi transmission from Malaysia and simultaneously I sent chi physically to them standing a short distance in front of me. Both parties used very sensitive instruments to measure the reception of chi the moment they felt it. It was proven again and again the recipients in the United States received chi an instance faster than those standing in front of me.

Even if I were to mention the exact instructions for distant chi transmission, most people would be unable to follow them. For the sake of theoretical discussion, even if they could follow the instructions, they would not have the tremendous amount of chi to do so. If they did so, they would drain themselves of chi and become weak or sick.

Hence, while distant chi transmission has great benefit for humanity in saving life when there is insufficient time for face-to-face treatment, it is not cost-effective for ordinary people to learn it for practical benefits, because it demands a lot of time and effort in its training. In the same way, if a person is sick, he sees a doctor. He does not have to study medicine to have the benefit of curing himself.

Nevertheless, we can utilize these principles of distant chi transmission in our daily awareness and for our practical benefits.

One important and useful principle is that many things the public consider ridiculous and impossible can be possible and scientific except that science in its present state of development has not researched into them and utilize their benefits. Actually distant chi transmission would be less ridiculous than television and fax machines to people a few hundred years ago.

An immediate benefit that affects countless people if specialists condescend and patients are brave enough to accept that what they consider impossible can actually be possible is that many so-called incurable diseases like cancer, cardiovascular disorders and clinical depression can be cured using methods other than what the specialists insist as the only means.

Indeed, the specialists could gain financially besides the joy of seeing their patients recover if they successfully employ this principle into their practice. Personally I have helped many students overcome so-called incurable diseases. Western doctors need not use the same techniques I use, i.e. chi kung healing and chi kung practice. They can use their own methods to implement the same principle of restoring energy flow which will then result in good health.

I would believe that Western technology would be more efficient in implementing the same principle than traditional manual methods. As an analogy to give witnesses a picture of how chi recipient moved after receiving chi transmitted by me over a distance, I had to see their movements in my mediation and then describe the movements to the witnesses. They would confirm the movements over telephone with other witnesses at the scene of chi reception. It would be faster and more effective if Western technology of television networking was used.

One does not have to be sick to benefit from this accepting that the so-called impossible may be possible. I have come across many people, usually not my students, who are in the habit of saying it is impossible, even relating to simple tasks. Usually what they mean is that they do not want to do it.

For example, some people asked me how I could have so much energy, despite my age, to do so many things. I told them to practice chi kung. They said they had no time. I told them to wake up 15 minutes earlier. They said it was impossible. They couldn’t even wake up in time to eat their breakfast. I am now wiser. I do not want to waste my time arguing with such people; I rather spend time helping those who want to help themselves.

On the other hand, we must also guard against the extreme, claiming that everything is possible. Even if a particular course of action is possible, it may not be feasible or beneficial to do it. For example, even if learning an advanced internal art on one’s own is possible, it is not feasible. It is more cost-effective and beneficial to learn from a competent teacher.

Stealing money or someone’s wife (or husband) may be possible but it is not a right thing to do. Even if he ignores moral values, it is not beneficial – it brings harm to himself, to the woman and the woman’s husband. It is more beneficial to earn money or a wife in an honourable way. 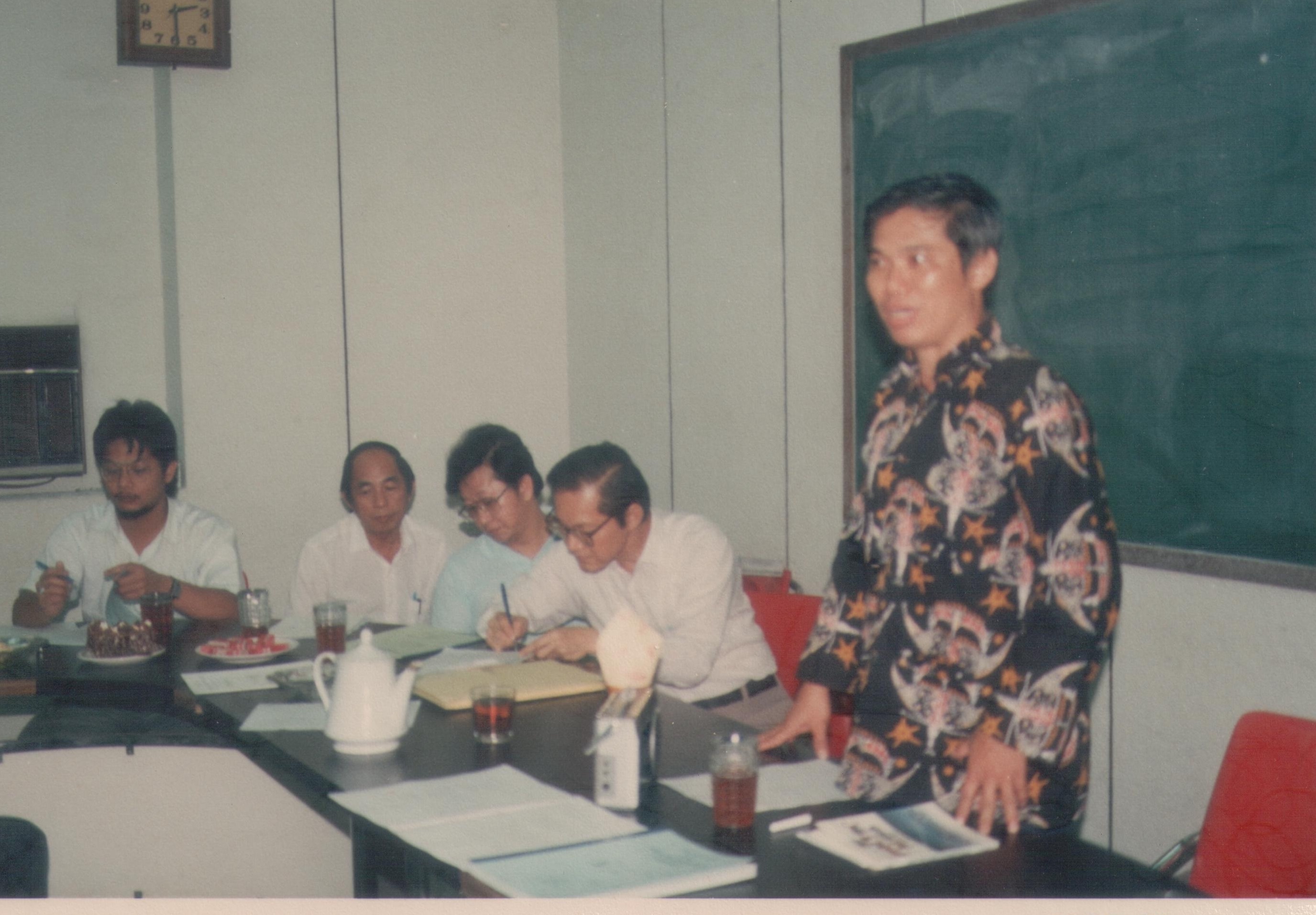 The above extract is reproduced from "Your True Nature: Wisdom of Living Masters" by Natalie Deane and Damian Lafont.

You can order this book from here or here.