THE JADE-PLUM IN A RED SHOE 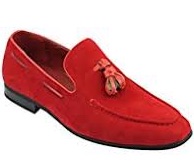 Back in the room, Yang found many interesting clues among the belongings Fragrant Fox had left behind. There were many dresses of different colours and patterns. As the waft of magnolia perfume drifted out from the dresses, Yang could not help reminiscing in those hours of pure bliss Fragrant Fox had given him only just now. He felt very guilty-conscious that he should repay her kindness and love by catching her. Should I let her go? he thought seriously to himself.

There were also some skin-masks and many make-up tools and ingredients. There were even ten different pairs of shoes. But one item stood out strikingly: despite the great different kinds of all other materials, all her handkerchieves were of the same kind -- pink and with a small "Lin" character embroidered at a corner. And inside a small travelling bag was painted a fox -- exactly like the one found in Miss Hu's safety-box, complete with delicate left-handed brush strokes and pleasant magnolia scent.

Yang was extremely happy. He never expected to find so many telling clues within so short a time and in such a fun-ful way.

Lin Su Ching, he mused to himself, your fox-tail will soon be out. In fact, since the discovery at Miss Hu's chamber that morning, he had suspected Lin Su Ching -- the left-handed lady Muslim kungfu expert from Szechuan. But Commissioner Chin's golden rule of tracing the clues to the suspect, had much influenced him, and he would not single her out unless sufficient clues dictated so.

Where can I find her? Yang thought. She probably won't return home now, after so many clues have been leaked out. She certainly is intelligent enough not to return home to a waiting police party. From now on she will probably wear different masks and take refuge at different places at different times. Even the face she normally wears -- the face she appears to her own household -- may not be her actual face. Very funny, very foxy indeed! Yang smiled.

Why does she seduce me tonight? She must have guessed that I am involved in this investigation, as I was involved -- sometimes as if enticed by Commissioner Chin into the involvement as in this present case -- in numerous investigations that were indeed big national news.

For a moment Yang wondered whether he might as well accept that tempting offer of becoming Deputy Chief Commissioner, so often suggested by Chief Commissioner Chin as well as the Prime Minister himself. He would then have a stable, comfortable and highly paid job, that would qualify him to have a wife, children and home. One day he might even rival Chin as another Perfect Detective. But no, a police or any governmental job, no matter how high its rank or great its influence, would not suit me. Of course I will help the government whenever I can and if it is morally justifiable, but I'd rather be a carefree wanderer, surviving on whatever rewards the government may provide if there are any, or surviving on sunshine and fresh air if there are none.

But why does Lin Su Ching go to all these troubles to seduce me tonight? She could have seduced me in a simpler way. Aha, she is actually much, much more romantic than I am, though people call me, and I would certainly like to think it justifiable, the Romantic Knight. Now, Yang Shao Ming, don't you think so highly of yourself! Don't you ever become an egoistic pig. Don't worry, I won't. Eighteen years of Shaolin training isn't a short time. Long enough for me to understand the illusion of worldly glories and pleasures.

Now come back to the practical point about this Fragrant Fox. Perhaps she tries to get some information from me, this foxy spy! Perhaps she tries to win me to her side; ha, ha, how fragrant! I bet she herself can't imagine that just three days after her fantastic, almost impossible theft, we could have collected so much convincing evidence!

Three days! Yang suddenly recalled. No one could have travelled from here to Szechuan and back again within three days. So she hasn't returned home yet. Yang was pleased with his own reasoning. That means unless she has hidden the jade-plum somewhere else, or has given it to some accomplice, the jade-plum is still here, in this room! She can't possibly have taken it with her just now in her escape.

This exciting thought aroused him up for action. And true enough, after a thorough search, Yang found the treasured jade-plum hidden carefully in a little red shoe! Yang almost could not believe himself. Just within three days, he had not only solved the theft of the century, but also recovered the booty -- here in his own hand was the jade-plum that was worth the treasures of the whole city.

Now I can get my three barrels of Persian Scarlet from Miss Hu. He smiled broadly.