A Shaolin monk performing a head stand, a pattern from “Luohangong” not unlike hartha yoga

I wish to prepare myself to excel in kung fu. I have some technical questions regarding the horse stance. On page 63 in your book, “The Art of Shaolin Kung Fu”, you recommend not to raise your body if you get tired. So what do you do after your posture-holding session is over?

Try not to raise your body when you are tired. When you find that you could not continue holding your posture further, raise your body and bring your feet together in the centre and drop your arms leisurely at your sides.

If you can jump to bring your feet together, it would be better. Just before your jump, bend your body slightly forward, release your fists which you have been holding at your waist and place your open palms near your knees. As you jump, breathe in gently through your nose into your chest, and simultaneously bring your open palms together facing upward at chest level. When you are standing upright with your feet together, turn your palms to face downward and lower them to your dan tian level, simultaneously breathing out through your mouth, and letting your chi sink gently — this is very important, gently — down to your dan tian. This is called “Chi Focusing at Dan Tian”. Then drop your arms leisurely at your sides.

Whether you bring your feet together in an ordinary way, or perform “Chi Focusing at Dan Tian”, remain standing upright in a totally relaxed manner with your arms hanging comfortably at your sides. Then think of nothing and do nothing for 5 to 10 minutes. This thinking of nothing and doing nothing is most important. If you relaxed sufficiently, you will find yourself swaying gently due to your internal chi flow. This is called in Shaolin Kungfu in Chinese (Cantonese pronounciation) as “Yew Foong Pai Lau”, or “Flowing Breeze and Swaying Willows”, sometimes read in classics but seldom understood by the uninitiated.

Some instructors do their horse stances lower to the ground and with their hands outstretched at shoulder level. What's the difference between your method and theirs?

These instructors are right. We at Shaolin Wahnam also perform the horse-riding stance with our hands outstretched. We call it “Carrying Water”.

In the basic horse-riding stance, the hands are held in fists at the waist on both sides. After performing this basic mode for some time, which can be a few weeks, months or years depending on the standard aimed at, one may use alternative modes. “Carrying Water” is one of them.

Another is “Holding Ball”, which is holding your two arms in a big circle like holding a big ball in front of your chest at your horse-riding stance. The “Three-Circle Stance”, widely used in Taijiquan, probably evolved from “Holding Ball”.

The different modes of the horse-riding stance give special effects. The basic stance focuses energy at the dan tian as well as builds energy at the body, arms and legs. “Carrying Water” develops powerful arms. “Lifting Water” focuses at the palms. “Holding Ball” enables the energy to circulate along the arms, as well as focus at the dan tian. “Golden Bridge” consolidates the energy all over the body.

Did the Shaolin monks practice a system similar to hatha yoga for their flexibility? How about the Taoist masters?

Bodhidharma himself or some other early Indian Buddhist masters might have taught the early Shaolin monks hartha yoga exercise, or the “Lohan Art” and hartha yoga might have developed from a common source in India much earlier.

Can you recommend any good sources of information on the Chinese equivalent to hartha yoga?

“Shaolin Luohangong” or “Shaolin Lohan Art” is the nearest equivalent to hartha yoga that I can think of. It is an important part of Shaolin Praying Mantis Kungfu, and is used to train not just flexibility but internal force. It is also found in Shaolin Lohan Kungfu. However, there is not much written about “Lohan Art”, it is usually passed down from master to students by words of mouth.

“Tongzigong” or “Art of Becoming Child-Like” is another near equivalent to hartha yoga, but as mentioned above these two arts probably developed independently and have some fine differences. While some Shaolin masters also practiced “Tongzigong”, it is generally acknowledged as a Taoist art, and was important in Wudang Kungfu. The Shaolin grandmaster, Pak Mei, who was a Taoist priest although Shaolin was generally Buddhist in tradition, was famous for “Tongzigong”. “Tongzigong” was also generally passed down by words of mouth.

In both philosophy and approach, chi kung and yoga are similar, although their methods may be different. Both disciplines start with health and vitality, then proceed to energy control, and at the highest level liberate the personal spirit to be united with the Universal Spirit. In yoga the process is from hartha yoga to pranayama to raja yoga. In chi kung the process is from dynamic chi kung exercise to quiescent breathing exercise to meditation.

Hence, in this comprehensive cultivation from the physical to energetic to spiritual, the equivalent of hartha yoga in the Indian system are dynamic chi kung patterns in the Chinese system. Dynamic chi kung patterns are known as “dao yin”. Most of chi kung practiced today is of the “dao yin” type, and some well known examples are “Eight Pieces of Brocade” and “Eighteen Lohan Hands”.

Exactly how do you tie a kung fu sash? Do practitioners of different kung fu styles tie their sashes differently?

The main purpose of the sash is to hold your pants so that they will not fall off. So irrespective of your kngfu style, you can tie it in any suitable way you like, but usually in a “live” knot so that in case of urgency you can untie it conveniently.

One helpful way to tie the sash is as follows. After you have wound the sash round your waist one or more times, place the left end over the right and make a half reef. Then make a small loop on both sides, place the right loop over the left loop and pull tightly, with both ends of the sash dangling down. This is a “live” ribbon-like knot. You can untie the knot easily by pulling any one end.

But if you are about to engage in combat, it would be better to tie a “dead” knot, like a reef-knot, to avoid a possible embarrassing situation of your opponent getting your pants down by pulling an end of your sash. The reef knot is formed as follows. Place the left end of the sash on the right and pull tight to form a half reef, then place the right end over the left and pull tight to complete the reef knot.

Does the color of the sash represent a rank like in karate?

No, in traditional kungfu the colour of the sash does not represent a rank. Indeed, if someone says he holds a rank of 10th dan black belt, I would suspect that his is not traditional kungfu. By convention, the sash of a novice as well as of a master is usually black in colour. 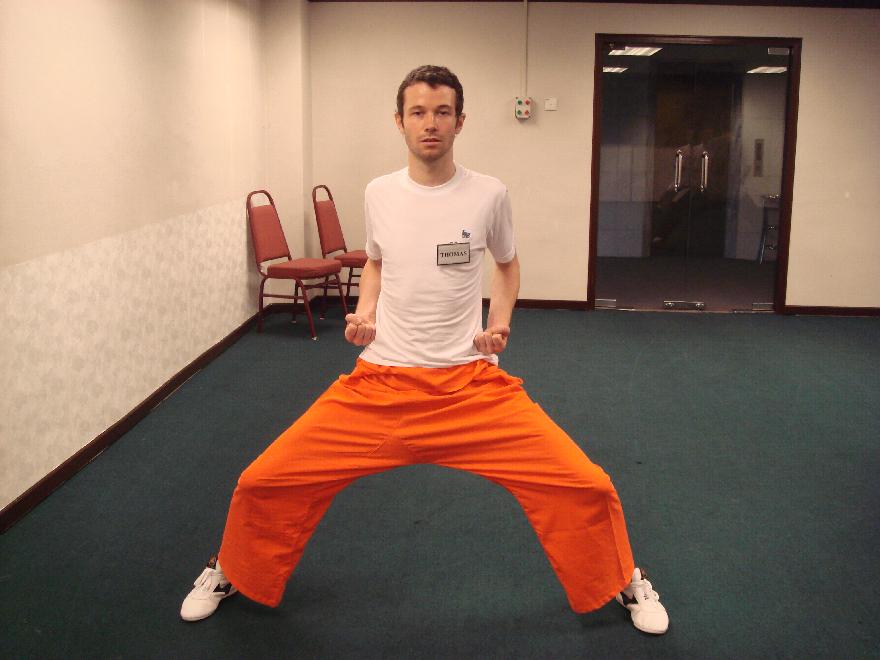 Is there any way to prevent hair loss?

Practicing chi kung is a good way to prevent hair loss. But you have to practice genuine chi kung, not just some gentle physical exercise.

“Carrying the Moon” is excellent for preventing or recovering from hair loss. Gently think of your head as you bend down while doing this pattern. Two other very good chi kung patterns to practice are “Lifting the Sky” and “Nourishing Kidneys”. You can find them in my chi kung books.

In chi kung, diaphragmatic breathing is not Abdominal Breathing. And what is breathed in and out is not just air but energy. The meaning of chi (qi) is energy — long before air was discovered by modern scientists. So in Abdominal Breathing, when one breathes in, energy goes into the dan tian or energy field at the abdomen, and when one breathes out, energy goes out from the abdomen.

When I do my practice sometimes I feel a bit uncomfortable on my abdomen (right side of my dantian area). Does it mean I do the breathing incorrectly, sucking in my dantian too hard, or is it because I just started my practice and it will disappear with time I have been training for about 5 months. Will it bring negative side effect on me?

It is likely that you have a deviation. Not only you sucked in your dan tian too hard, you probably forced your chi down too. The discomfort will not disappear with time; in fact it would get worse if remedial action is not taken. But don't worry; it can be overcome as follows.

Stop your Abdominal Breathing or Reversed Breathing immediately. Perform “Lifting the Sky” about 30 times per session, three sessions a day. As you perform “Lifting the Sky”, breathe in gently through your nose, and breathe out in greater volume through your mouth, but do not force your breathing out. If you feel thirsty after the session, it is an indication that you have forced your breathing. You should clear your problem in about a month.

If you know self-manifested chi movement, your recovery would be faster, in a week or two. But don't attempt it if you have not been properly trained how to perform it.