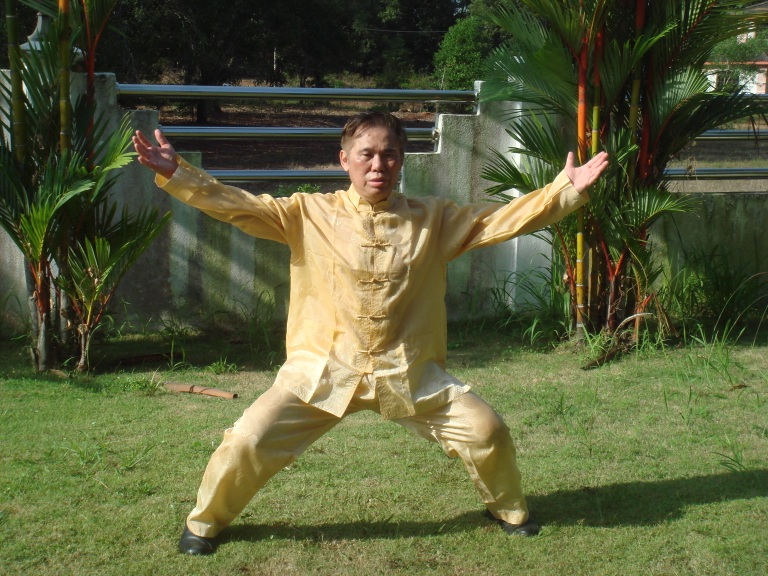 Regarding the “Flowing Water Floating Clouds Set”, I watched the "Dragon Strength Set” today (the old black & white copy) and was intrigued to see many similarities, even at the start there is a sequence of movements similar to Cloud Hands.

Please, may I ask about the history and content of the “Dragon Strength Set”?

While Taijiquan in general is influenced mainly by the Snake and the Crane of Shaolin Kungfu, our Wahnam Taijiquan is influenced more by the Dragon. It is no surprise therefore, that you can find a lot of similarities between “Flowing Water Floating Clouds Set” and “Dragon Strength Set”. Indeed, much of the inspiration as well as spirit of “Flowing Water Floating Clouds” is from “Dragon Strength”.

The development of my “Dragon Strength” from the time I learned it from Uncle Righteousness to how I practice it now is interesting, and reveals various important inputs from all my four teachers. It also suggests how and why our Wahnam Taijiquan has developed to its present stage where our Taijiquan students can develop internal force just from the forms themselves.

The “Dragon Strength Set” was a specialty of my sifu, Uncle Righteousness. One of the kungfu masters of that time who was better known by his nick-name “Four-Eye Cheong”, spent a fortune learning this set from my sifu. My sifu did not charge him any money to teach him. But after each nightly practice, Four-Eye Cheong would take my sifu to a restaurant where they would drink and have fine food.

Unlike now when I teach a kungfu set to a senior practitioner in a day or two, my sifu, following the tradition of past masters, took a year or two to teach this “Dragon Strength Set” to Four-Eye Cheong. Imagine paying for expansive wine and food every night for a year or two. But, luckily, Four-Eye Cheong was quite wealthy, and both enjoyed each other's company.

What I learned from Uncle Righteousness was just the forms of the set. There was not much internal force. My first taste of internal force was when I learned from my Wuzu or Five-Ancestor Kungfu teacher, Sifu Chee Kim Thong. My taisiheng, who is Sifu Chee's eldest son, constantly reminded us not to use strength, and I often wondered how we could be forceful without using strength. Isn't it remarkable that now even our beginning students know why?

Later when I learned from Sifu Ho Fatt Nam, I had a better understanding of chi flow and internal force. It was inspiring when I first broke a brick. Earlier I had practiced Iron Palm for about a year, and yet could not break a brick. Then I learned One-Finger Shooting Zen from Sifu Ho Fatt Nam. After just a few months, I tried striking a brick just for fun. To my surprise, it broke.

A particularly rewarding experience was when Sifu Ho Fatt Nam showed me how to perform the Shaolin Pakua Set slowly with chi flow, after explaining to me that was what he taught the Sultan (King) of one of the states in Malaysia for health, vitality and longevity. I transferred what I learned in the Shaolin Pakua Set to the Dragon Strength Set.

Another landmark was when my Wing Choon sifu, Sifu Choe Hoong Choy, showed me how to perform Siu Lin Tau slowly to develop internal force. I still remember what he said, “If you perform slowly without using strength, it is like Taijiquan.” By then I knew fully well that without using strength like Taijiquan could be very powerful. Then my sifu showed me how to focus internal force, which made it looked like performing the Iron Wire Set of Hoong Ka Kungfu.

The first time I gave a public performance of the “Dragon Strength Set” using mind to direct chi to direct form more than 20 years ago at the Science University of Malaysia, the audience was stunned. My movements were powerful yet so fast that one could hardly see the movements. People had heard of such feat but thought it was a myth. Now many of our advanced practitioners could do this!

Reproduced from Questions 3 in Selection of Questions and Answers March 2009 Part 1. Thanks to Stephen Chang for highlighting the answer, especially for those attending the Dragon Strength Course in December 2014.