HOW DID GRANDMASTER WONG LEARN THE VARIOUS WEAPON SETS? 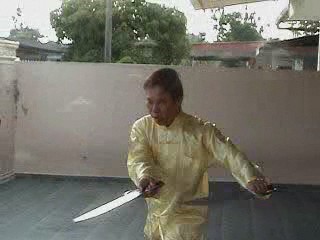 How did Sifu come to learn these weapons? I believe it would be very beneficial for us in Shaolin Wahnam to understand the history and story behind these sets.

I learned the Ho Family Flowing Water Staff from my sifu, Sifu Ho Fatt Nam. Before this time, the staff set was taught only in the Ho Family. I was one of the very few privileged outside the Ho Family to learn this secret set.

The Shaolin Plum Flower Single Knife Set and the Shaolin Traveling Dragon Sword Set were composed by me based on some classics on the single knife and the sword.

I based the composition of my sword set on three classics, namely Shaolin Bodhidharma Sword, Shaolin Traveling Dragon Sword, and Wudang Sword. I loved the sword set very much, and spent a lot of time practicing it.

Marvelous Pooi was a kungfu lover, and he had a number of famous as well as rare sets. He also taught me the soft whip and the copper legume hammer. He lived in the village of Ayer Itam in Penang. Although Penang was my home town, I was then teaching as a school teacher in another town, Alor Star. Every Friday night I would travel back to Penang to learn the weapon sets from my sisook.

I read about this famous Green Dragon Crescent Moon Knife Set in some kungfu magazines in Chinese, and was fascinated by it. I remembered watching an impressive public demonstration of this set by my siheng, so I entreated him to teach me and he kindly did.

I was pleasantly surprised because it was the custom to teach such a prestigious set only to one's selected disciples. A main reason, I believe, why my siheng broke tradition and taught me this famous set was because he knew I was not only a good student but also a favorite disciple of Uncle Righteousness whom he greatly respected.

At that time Uncle Righteousness had left this world for heaven, and I had learnt from two other masters, Sifu Ho Fatt Nam and Sifu Chee Kim Thong. To learn the Green Dragon Crescent Moon Knife Set my siheng and I returned to the training hall at Soon Tuck Wooi Koon in Penang where 20 years ago both of us learned from Uncle Righteousness.

Two other weapon sets I am very proud of are Fifth Brother Octagonal Staff or Ng Long Pat Kua Khuen in Chinese, and Six-and-Half-Point Staff or Luk Tim Poon Khuen.

I learned the Hoong Ka Fifth Brother Octagonal Staff from my childhood friend, Sifu Chow Kok Chee, by exchanging some kungfu sets with him. Sifu Chow Kok Chee said he had not learnt this famous set before, but he knew his godfather, Sifu Soong Siew Por, had learnt it. Sifu Soong Siew Por was a disciple of the celebrated Wong Fei Hoong, and he migrated to Malaysia in his later years. So Sifu Chow learned this famous staff set from his godfather, then immediately taught it to me.

I learned the Six-and-Half-Point Staff from my Wing Choon teacher, Sifu Choe Hoong Choy. It was the fulfillment of a wish made years ago while I was having a chit chat with my first kungfu teacher, Uncle Righteousness, at his favorite bamboo grove of his house. Uncle Righteousness was famous for his staff, but he said he didn't have a chance to learn the Wing Choon Six-and-Half Point Staff. He asked me to learn it if I had the opportunity.

I had the opportunity when I learned Wing Choon Kungfu from Sifu Choe Hoong Choy. He was very kind to me and asked me to choose whatever sets I would want to learn from him -- a privilege rarely given to anyone. Of course I chose the best, namely Siu Lin Tou, Flower Set and Six-and-Half-Point Staff. Having the chance to learn the secrets of any one of these prestigious sets was rare enough, having the chance to learn the secrets of all the three at the same time was just incredible.

I still remember Sifu Choe Hoong Choy told me why the seventh signature technique was called half a technique or point. He said this was taught and explained only to a selected disciple when the master wanted to pass the lineage holder to him. 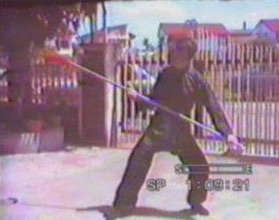 This answer is taken from Special Weapon Course: 10 Questions to Grandmaster Wong of the Shaolin Wahnam Institute Discussion Forum.

The answer first appear in the March 2013 Part 1 issue of the Question-Answer Series.