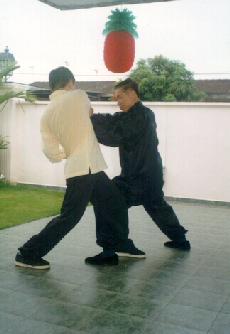 Laying a Trap for your Opponent

In the previous sequence we used “Fell Tree with Roots” when the opponent has his right leg in front. How would we feel an opponent when he has his left leg in front? Can we still use “Fell Tree with Roots” but reverse the left and right side We can but that is not to our best advantage because we would then be using our left leg, which is normally our weaker leg, as anchor.

If we wish to fell an opponent when he attacks with his left leg in front, a good pattern to use is “Lead Horse Back to Stable”. On the other hand, if we wish to apply “Lead Horse Back to Stable”, it would be advisable to plan a strategy to maneuver him so that he uses his left leg mode as he attacks with his right hand. A simple example is shown in this sequence.

The initiating attack is a feint move. As soon as the responder reacts, the initiator presses forward with “Fierce Tiger Speeds Across Valley”, forcing the responder to move back into the left leg mode.

Notice that the initiator may continue with any of the Sequences 5 to 8. But here his objective is to lay a trap for the opponent so that he can fell him with “Lead Horse Back to Stable”. Hence, he purposely hesitates to tempt the opponent to counter-attack.

The responder moves his left leg forward to counter-attack with “Black Tiger Steals Heart”. If he maintains the initiative, he may continue with any of the Sequences 1 to 12.

Like the felling technique in the previous sequence, many movements are involved, but if you are well trained you can execute these movements swiftly and flowingly, and fell the opponent before he realizes what has happened. You would have to follow up with a coup de grace.

But be very careful when you practice this technique with your partner. It is very effective, so make sure you do not dislocate your partner's elbow or smash his face onto the floor. Also make sure the landing is soft.

The responder is well trained too. He neutralizes the leverage advantage of the initiator by adjusting his footwork (not shown in the pictures), and releases the opponent's double tiger-claw grips by circulating his arm and completing the movement with “Hide Flowers in Sleeves” (also not shown in the pictures). Immediately he counter-attacks with “Precious Duck Swims through Lotus”.

However, the initiator overcomes this difficult situation by moving a small step backward, and simultaneously striking the opponent's punching arm with a “Hand Sweep”. This reminds us that in real life, even when situations may appear hopeless, if you just step back you can often overcome the difficulty.

The responder moves his front leg a big step backward into a left False-Leg Stance and uses the poise pattern “Lohan Asks the Way” to observe the opponent. The initiator changes his hand-sweep into a tiger-claw to assume the poise pattern “Single Tiger Emerges from Cave”.

Alternatively, if the initiator wishes to maintain his initiative he may continue attacking with “Black Tiger Steaks Heart” or “Fierce Tiger Speeds Across Valley” and continue with appropriate sequences.