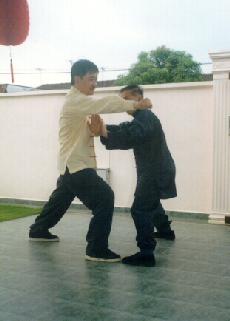 Let Mercy Flow from Your Hands

While the shoulder-throw technique to fell an opponent in the pattern “Farmer Hoes Rice Field” can cause drastic injury, the pushing technique to fell an opponent in “Fierce Tiger Pushes Mountains” in this sequence is gentle. You merely push the opponent away, without hurting him, manifesting the principle “shou xia liu qing” (“sau ha lou cheng” in Cantonese), which means “let mercy flow from your hands”.

“Let mercy flow from your hands” is an admirable teaching passed down by past masters. All great masters of various styles exhibited this quality. It is especially meaningful in Shaolin Kungfu, which is based on the Buddha's teaching of compassion and cosmic wisdom.

“Let mercy flow from your hands”, in combat as well as in all aspects of life, is not just altruistic. It also contributes to your benefits. If you maim an opponent, you may regret for life, besides having to be constantly on the look out for his followers to come back to take revenge. When you “let mercy flow from your hands”, you open your heart to compassion, and experience an exhilarating sense of spiritual expansion.

From your poise pattern you move forward to attack your opponent with “Black Tiger Steals Heart”. As he responds with “Single Tiger Emerges from Cave”, followed by “Fierce Tiger Speeds through Valley”, you are ready with “Golden Dragon Plays with Water”.

As in the previous sequence, you have successfully laid your trap. Now you can choose to throw your opponent over your shoulder with “Farmer Hoes Rice Field”, possibly breaking his spine and paralyzing him for life, or “let mercy flow from your hands” by pushing him away with “Fierce Tiger Pushes Mountain”.

You make a wise choice. You move diagonally forward to your right side, “tame” his left arm, and push him away. The momentum of your push comes not from your shoulder, but from your back leg. You start your push from the back right foot, control the movement with your waist, and complete the push with your palms.

Your opponent responds with an excellent counter. He shifts his left back leg slightly backward to his right side, “opens” your arms, and executes a frontal thrust kick with the pattern “White Horse Presents Hoofs”.

You move your left front leg backward into a J-Step (which is like a False-Leg Stance except that both feet are close together), and simultaneously strike his kicking leg. This pattern, which implements the tactic of “no defence direct counter”, is “Save Emperor with Single Whip”, except here the J-Step instead of the Dragon-Riding Step is used.

Your opponent pulls back his leg and withdraws to “Lohan Asks the Way”, while you withdraw to “Single Tiger Emerges from Cave”. Either of you may continue with another combat sequence.

When you are at the level of “external change” or “internal change” in our combat training programme, either you or your partner may change into another combat sequence before the completion of this sequence. For example, after pulling back his kick, instead of withdrawing your partner may move forward with a leopard punch at your temple. Or before he could do that, you may move forward with “Black Tiger” or “Poisonous Snake”.