THE TACTICAL RETREAT OF SHAOLIN KUNGFU 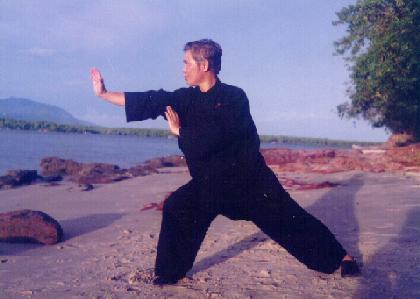 The recent discussions in the Taijiquan forum about moving backwards got me thinking. I thought long and hard about whether or not to write this article, thereby revealing what is considered to be a Shaolin "secret," but I finally decided to be as open here as my Sifu has always been with me. As Sifu says, "We have so many secrets, we can afford to be generous.”

The tactic I will be describing in this article is actually a grouping of tactics that share a similar theme. The general theme is that of a "retreat" -- i.e. moving or shifting backwards. For the sake of this article, I am calling this theme the "Tactical Retreat of Shaolin Kungfu." This term is of my own invention and will not be found in any of Sifu's other articles.

One of the hallmarks of Shaolin Kungfu is what Sifu calls "the Marvelous." A Shaolin axiom states:

But what does marvelous mean? To quote Sifu, it means that: "...the response is so superb, usually with an element of surprise, that the opponent himself cannot help marveling with awe and admiration at it.... The marvelous response gives a sense of being 'just right' in all aspects, though it may be directly related to one particular aspect, like that of techniques, force, speed, or other factors."

Many of us in Shaolin Wahnam have already experienced the Marvelous in the spontaneous application of techniques during sequence sparring. I'm sure many of you have had the thought, “Wow, how did I do that?” Your response was so natural and fluid that you even surprised yourself!

The concept of the Marvelous is important for understanding my explanation of the Tactical Retreat. It is also important to have an understanding of the Shaolin Kungfu principles, including:

Let's look at a few examples.

Let's imagine that I am facing an opponent in friendly sparring. I begin in a right Bow Arrow Stance in the poise pattern Fierce Dragon Crosses Stream (found in Sequences 5 and Sequences 6). See the picture above.

As I calmly observe my opponent, I try to gauge whether or not he will initiate the attack. In my experience, 30 seconds of patience is often all you need to lure an opponent into initiating an attack. (If he is patient and does not attack, then I might use a ruse and initiate a false attack in order to elicit a response.)

Let's presume that he initiates. Since I am in a relatively long stance and have 50% of my weight on each leg, some people might assume that I have very little mobility, or in Taijiquan terms, that I have "the weakness of double yang."

This kind of thinking usually comes from a lack of experience with genuine Shaolin stances, which are fluid and exceedingly agile.

For example, even without moving my feet, but simply by using my waist and shifting my weight, I can neutralize many attacks as well as launch my own counter attacks -- and I can do these faster than if I moved my feet!

It's important to remember that Yin and Yang apply not only to the left and right feet, but also to the body and hands. In the pattern Fierce Dragon Crosses Stream, my lower body would be Yin (solid and rooted) whereas my upper body would be Yang (active and flexible).

At higher levels, this Top Yang Bottom Yin is all that a master would need against most opponents. Without moving his feet, he could neutralize and counter hundreds of different attacks in one smooth movement. In Shaolin Kungfu, many Dragon patterns use this kind of movement. “Swimming Dragon Plays with Water” would be a good example.

From the poise Fierce Dragon Crosses Stream, as my opponent initiates his attack, I can simply shift backwards from my Bow Arrow Stance into a False Leg Stance, thereby removing all of his targets. Simple, yes. Unsophisticated, no. It is worthwhile to remember that even the simplest of things, like meditation, can be profound when practiced skillfully.

With skillful timing, this simple retreat enables us to not only evade an attack, but also to be poised to strike back at the golden opportunity when the opponent's old strength has been spent and his new strength has yet to be created. The False Leg Stance is actually beautiful in its versatility, even when limited to forward and backward movements.

In the picture below, you can see that Ronan has retreated backwards to a safe distance from Darryl's attack. He also “leans” on Darryl's attack with his Tiger Claw, but even without the lean, he would be relatively safe. 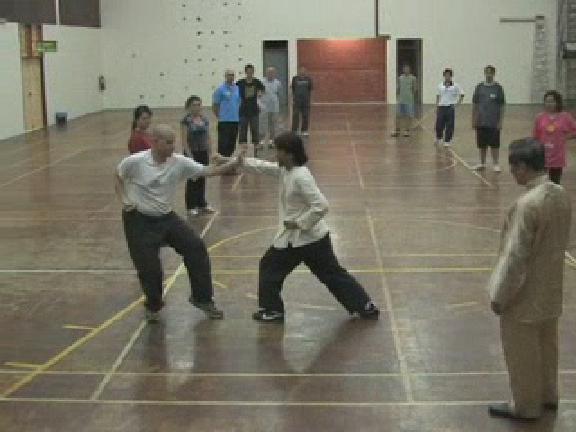 Many of you have learned this skill in Combat Sequence 1. If you practice it well, you will eventually find that you are able to sense when your opponent's attack is fully spent, and pounce at the golden opportunity. Then why is it so hard to land a Black Tiger on your opponent (an inch away!!) in this sequence? Because he also knows how to do a Tactical Retreat into the False Leg stance!

A skill that will make the attack more effective, but which is beyond the scope of this article, is called taming. Those of you familiar with this technique should have no trouble understanding where the skill fits in. 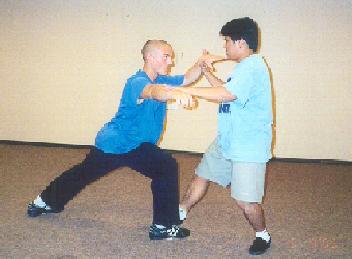 What if my opponent uses Continuous Punches so skillfully that there is no golden opportunity between his attacks? Or what if I miss the golden opportunity? Since I have already retreated back to a False Leg Stance and have 90% of my weight on my back leg, am I not trapped with no place to go?

If I am in an awkward stance and have not maintained the Six Harmonies (Liu He), namely Essence, Energy, Mind, Body, Hand, Footwork (Jing Qi Shen2 Shen1 Shou Bu), then yes, I will be trapped. I will have no place to go and I will be in trouble. But if I train systematically to maintain the Six Harmonies not only during form practice, but also during sparring, then I will be able to retreat skillfully. I will also be able to move in any direction with either an attack or a defense, or both.

If my opponent is using Continuous Punches and I have already retreated a few feet backwards from Bow Arrow to False Leg, he must press his attack forward in order to reach me. In his haste to catch up with me, he must be careful not to fall into my ruse. Remember that my front "false" leg has no weight. Also remember that, unless he is 8 feet tall, my legs are longer than his arms.

In the picture above, if you look carefully, you can see that Ronan is about to be hit unaware by Chun Nga's No Shadow Kick. In this example, Chun Nga is simultaneously using the principles of "Long against Short", "No Defense Direct Counter" and "Starting Later but Arriving Earlier”. In friendly sparring, he would simply tap his foot on Ronan's abdomen, but in real combat he could easily break a knee or blast Ronan in the groin. Again, we can see how a simple retreat opened the way for a fight-ending counter.

What if my opponent uses a kick, which has more reach? Again, there are many options from both the Bow Arrow and the False Leg Stances, even if we just limit ourselves to purely backwards movement. From either stance, I can retreat to the other stance without stepping backwards. The footwork to go from Bow to False Leg appears in Sequence 1, while the footwork to go from False Leg to Bow appears in Sequence 5.

The pattern "Single Whip Saves the Emperor" is a good counter against kicks and can be seen in the two pictures above and below. Many of us have learned this pattern as a counter against front thrust kicks like “White Horse Presents Hoof” (Combat Sequence 10), but at higher levels it can be adapted to counter almost any kick, especially if you have some internal force.

In this example, the principles would be "no defense, direct counter" along with "avoid an opponent's strong points, strike the weak ones". By retreating, we have removed the targets from our opponent, but his leg remains a viable target for our Single Whip. With skillful timing and some force, you can -- from a safe distance -- strike his knee, shin, or ankle with a "sting" that can numb his leg.

Although only a few of us have enough force to break a leg with one strike, a good "sting" can be enough even in combat. Having had my leg stung by my seniors, I know what it feels like. Maintaining the Six Harmonies when one of your legs has been stung is virtually impossible. As soon as you put that leg down, you are unsteady and vulnerable. 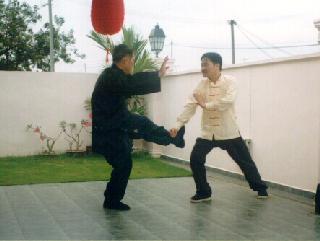 Application of Single Whip against a thrust kick

The following discussion is reproduced from the thread The Tactical Retreat of Shaolin Kungfu posted by Anthony Korahais in the Shaolin Wahnam Discussion Forum on 23rd November 2004.