“Yun Shou” in Mandarin, or “Wan Sau” in Cantonese

When the great Zhang San Feng entered perfect tranquility, his chi started to move. In Taijiquan terms, this is expressed as “Extreme stillness generates motion”, and is a manifestation of yin-yang interaction. As he let go, his movements became more vigorous, and were poetically described as “liu shui xing yun” (“lau shui hang wan” in Cantonese) or “Flowing Water, Floating Clouds”.

It is also significant to note that in Taijiquan, originally it was chi flow that generated forms, and not performing forms in the hope of generating chi flow, as many modern practitioners do, or hope to do. This does not mean that it is wrong to perform forms to generate chi flow (in fact we do this often), but if we understand the original concept and are able to put it into practice, we can bring our Taijiquan to a remarkable high level within a relatively short time.

Our Shaolin practitioners have a parallel concept. In the historical development of kungfu (including Taijiquan), combat application came first; individual patterns came later, and not vice versa as many modern kungfu practitioners believe. Hence, asking whether kungfu patterns can be used for combat, is irrelevant. Understanding this and being able to put it into practice will enable us to be combat efficient within a relatively short time.

Our Wahnam Taijiquan Simplified Set was composed with this flowing movement concept as one of the main considerations. Other considerations include functionality and comprehensiveness.

As it was specially composed for participants of a VIP Taijiquan course, who normally have little time for extended practice, the whole set is short enough to be performed in a few minutes, and versatile enough for them to select individual patterns or sequences from it to practice independently. Yet it is comprehensive enough to fulfill their needs not only to manage stress and attain peak performance, but also to develop internal force, to defend against all categories of attack as well as for keeping fit and for recreation.

As a reminder of the manner Zhang San Feng originally developed Taijiquan, we call this set “Cloud Hands”. You will notice that it is the first part of our basic Wahnam Taijiquan Set, “White Crane Flaps Wings”. 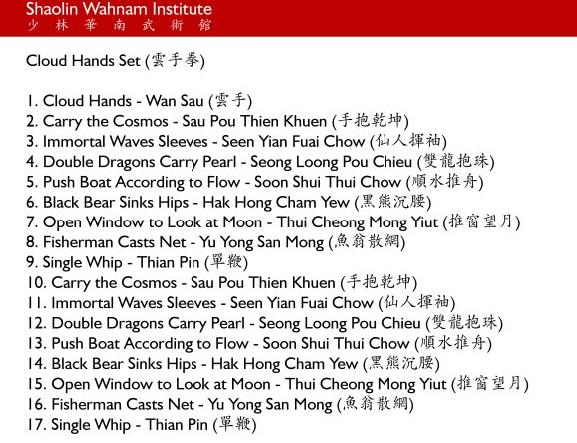 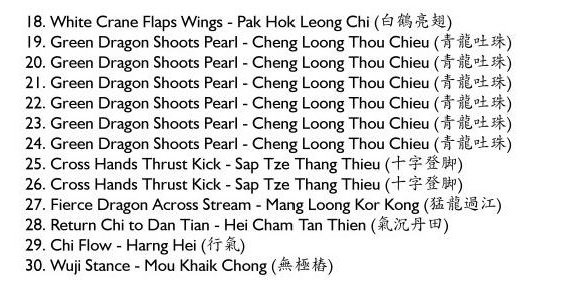