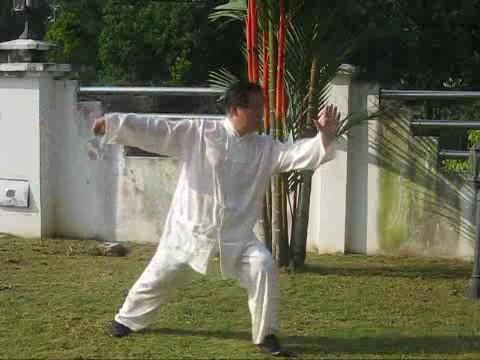 Do you know why this pattern is called "Single Whip"?

There are two main reasons why Taijiquan is usually performed slowly. Slow action enables a practitioner to perfect his forms, including transitional movements between patterns. Secondly, it generates energy flow, contributing to the internal aspect of Taijiquan. Of course, in combat, Taijiquan movements should be fast.

This 108-Pattern Set, sometimes called the Long Form, is the standard set in Yang Style Taijiquan. There is a 24-Pattern Simplified Taijiquan Set derived from it.

A draft version when Grandmaster Wong first composed the set on 2nd April 2012 based on the original 108-Pattern Set is shown below. Some slight changes were made with "Needle at Sea Bottom", "Dodge, Extend Arm", shoulder strikes and elbow strikes.
Please chick the pictures or the captions below to view the videos