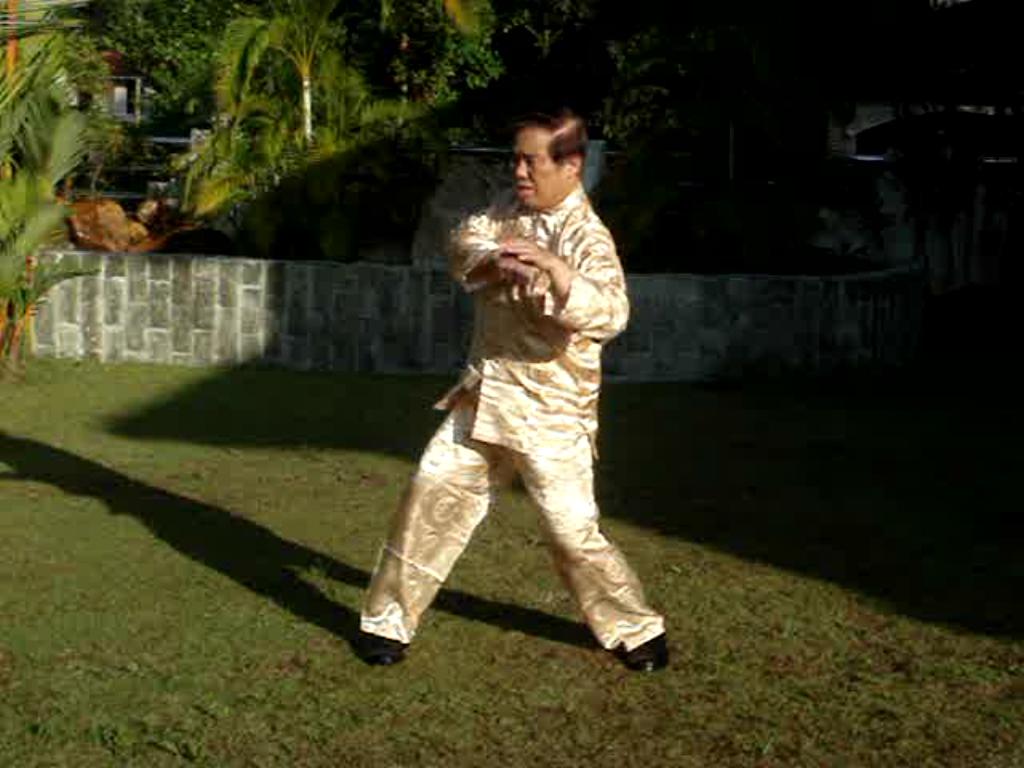 Sifu, can you please elaborate on the difference between Shaolin, Wing Choon and Taijiquan?

But in this answer I shall use the terms "Shaolin", "Wing Choon" and "Taijiquan" as the public generally understand them today.

Their difference may be described under the following four headings: form, force, application and philosophy.

The form of Wing Choon Kungfu is distinctly different from that of Taijiquan. Wing Choon form is straight and direct, whereas Taijiquan form is circular and flowing. Shaolin form is somewhere in between.

Suppose a powerful punch is ramming into you. If you use Wing Choon Kungfu, a typical counter is to rotate your waist anti-clockwise, with your left tan sau or mirror hand deflecting the punch, and simultaneously you strike your phew chee or thrusting fingers into the opponent's throat. You do not shift your body back, but you deflect the powerful strike by rotating like a wheel.

If you use Taijiquan, a typical counter is to shift your body back, without moving your feet, to neutralize the full force of the punch. Simultaneously, with the rotation of your waist, your brush away the punch with your left hand and strike him with your right palm, using the pattern Green Dragon Shoots Pearl. The Taijiquan movement is circular and longer; the Wing Choon movement is fast and straight.

A typical Shaolin counter is to shift the front leg back into a False-Leg stance to neutralize the force of the powerful punch, while leaning one hand using Single Tiger Emerges from Cave on the punch, then move forward the same front leg into a Bow-Arrow Stance and strike the opponent with the other hand using Black Tiger Steals Heart. Here, the Shaolin application is technically slower than that of Taijiquan, and uses two Shaolin patterns whereas only one Taijiquan pattern is used. The Shaolin tactic in the counter is "first defence, then counter", whereas that of Taijiquan is "defence-cum-counter".

All this does not mean that Shaolin Kungfu is the least effective as it uses two patterns, Taijiquan more effective as it uses only one pattern, and Wing Choon the most effective as it uses the least movement. There may be situations in combat where using two patterns to counter is preferable to using just one pattern, like when you wish to ascertain that an opponent's initial attack is not a feign, or using more movement is preferable to using less movement, like when you wish to slow down a fast opponent. Moreover, the Shaolin counter here represents its basic level. At higher levels, Shaolin Kungfu also employs only one pattern or short movement in "defence-cum-counter" and "no defence direct counter".

These different ways of counters not only enrich our performance in combat but also in our daily life, like in the art of negotiation, for which you are an expert. In some situations you may want to use the Wing Choon approach, direct and fast, cutting down a competitor or distractor in one stroke. In other situations you may want to give him some space but controlling him so that you can strike him decisively when the time is appropriate. There are also situations where you want to play safe, you just make contact and observe, striking only when it is timely. Isn't it interesting that by widening our scope in kungfu, we not only add depth but also make our life more rewarding?

Regarding philosophy, Wing Choon Kungfu is basically a fighting art. There are no special provisions for health promotion and spiritual cultivation. But our Wing Choon is different. Our Wing Choon training, like that in Shaolin and Taijiquan, gives us good health and contributes to our spiritual growth. Shaolin Kungfu and Taijiquan are a class above all other martial arts. Both Shaolin Kungfu and Taijiquan originated not for combat, not even for health, but for spiritual cultivation. Bodhidharma taught the Eighteen Lohan Hands, which later became Shaolin Kungfu, to help Shaolin monks to attain Enlightenment. Zhang San Feng practice Wudang Kungfu, which later evolved into Taijiquan, to attain the Tao.

The combat philosophy of Wing Choon Kungfu can be summed up as direct, fast and vicious. When a Wing Choon practitioner can finish off an opponent in one move, he won't use two, and his attacks are aimed at deadly spots like eyes, throat, solar plexus, ribs, spine and groin. He does not give an opponent a chance. In contrast, Taijiquan is circular, graceful and friendly. Instead of striking and harming an opponent, a Taijiquan exponent often just pushes him away. Shaolin Kungfu is in between, showing mercy but at the same time indicating that much harm can be done if an opponent does not submit. A Shaolin exponent, for example, would subdue an opponent with chin-na, threatening but not really to break his joints, or pinning an opponent on the ground with two fingers at his eyes, indicating that they could be gored out if necessary. 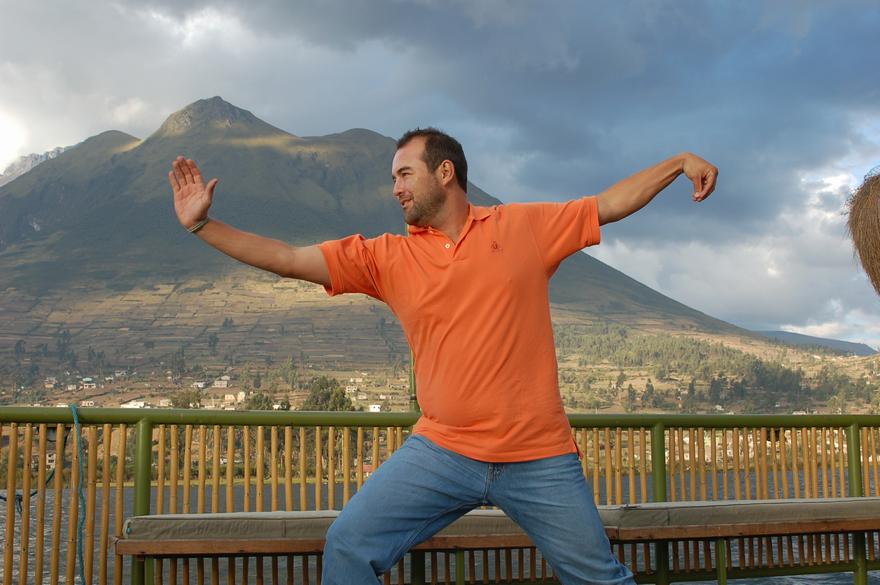 On the other hand, Taijiquan is gentle, graceful and accomodating, demonstrated by Sifu Jose Antonio in "Single Whip"

Thank you for accepting me for the Intensive Chi Kung Course.

Many people have told me that the Intensive Chi Kung Course has changed their lives. I am sure you will find it rewarding. It is an amazing course where you will learn chi kung skills ranging from basic to masters' levels.

I would like to regain perfect vision. I am presently shortsighted.

If you continue to practice at home what you learn at the course, there is a good chance that you will throw away your spectacles. Many students have done that. You will greatly enhance your chance if you add "Shaolin Eight Eye Techniques" to your daily practice.

Please do a search in my Question-Answer Series to find our more about these wonderful eye techniques. Go to my home page. In the box at the top of the page where you can find "Search this website using Google", type in whatever topic you wish to search. Then click the "Search" button.

There are problems which are challenging to resolve despite the amount of effort. Sometimes things are not flowing as well as they should. From Sifu's writings, I came across method of problem solving by connecting with the Universal Mind. Perhaps practicing good chi kung is relevant to overcome the problems.

Over the years I have improved the teaching of the Intensive Chi Kung Course. One of the methods newly added to the course is to use mental clarity to solve problems. Many students have reported that this has enabled them to see their problems clearly and solve them more efficiently. 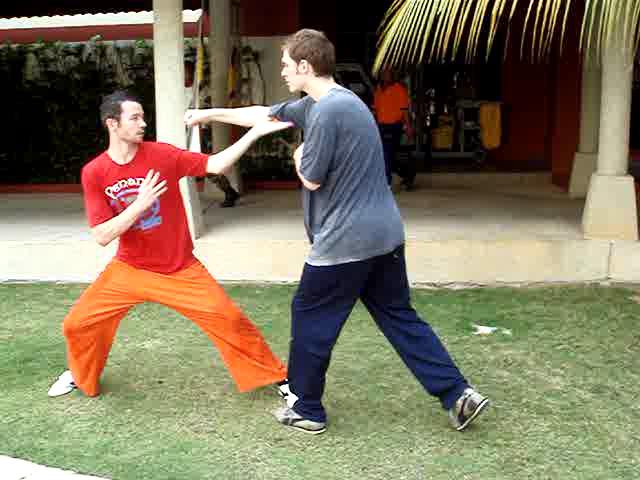 Shaolin Kungfu is compassionate and decisive, manifestd in the sparring here by Tom and Christ during an Intensive Shaolin Kungfu Course

I attended a course conducted by a master who opened some of our points and transfered some chi to the students. I remembered Sifu's good advice to remain relaxed. This master was delighted that I managed to absorb the most energy compared to the rest of the participants!

To be relaxed and focused at the same time is the first skill taught in the Intensive Chi Kung Course. This skill is extremely important in chi kung, as without this skill, a practitioner cannot enter into a chi kung state of mind, and without entering into chi kung state of mind he cannot practice chi kung correctly even when he may be performing the techniques and the breathing correctly.

This is a secret many chi kung students do not realize, and as a result they do not get any chi kung benefits even when they have practiced chi kung for years. More than 80% of people practicing chi kung today make this mistake, usually without realizing it. That is the reason why they are still weak or sick although they have performed chi kung exercises for years. Without entering into a chi kung state of mind, they merely perform chi kung techniques as gentle physical exercise.

On the other hand, if you are focused and relaxed at the same time, no matter what you do, you will do better. If you have practiced genuine chi kung for six months, you have trained yourself to be focused and relaxed for six months, which will enable you to be more cost-efficient in your work and play. This is one of many benefits we get from practicing genuine chi kung.

One of his senior students tried "moving" me but was unsuccessful. He said that sometimes it was like that. He did manage to "move" the other participants though. I wonder why this was so and how to practice to realize these skills.

If your chi if powerful, another person may not be able to move you.

I recalled that years ago a chi kung master well known for moving people tried to move me. But he couldn't. He told me that my chi just repulsed his.

If your chi is more powerful than the person receiving it, you may move him. All you need is a little technique to do so. Most of the students who have attended my Intensive Chi Kung Course can do this demonstration, though we do not pay much attention to it. We regard it like a show with no real practical benefits. We are more interested in using our chi for good health, vitality and longevity. Nevertheless, we can try out this demonstration for fun during the Intensive Chi Kung Course.

Moving someone with chi is like pushing someone physically. If you are stronger than the other person, you can push him quite easily. In the case of chi, the person being pushed should be relaxed and follow the movement, otherwise he may be harmed by the tremendous amount of chi pushed at him. 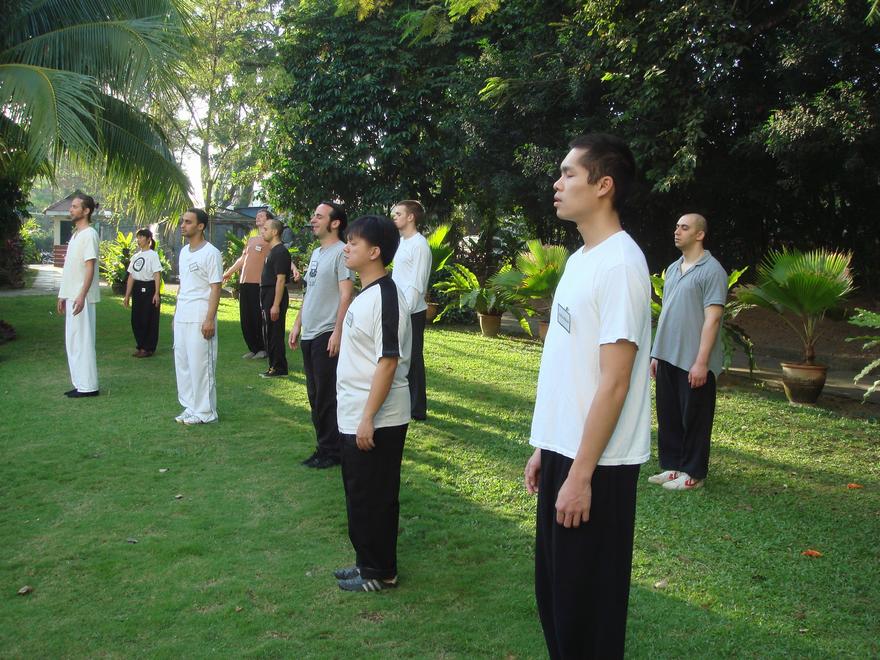 Mental clarity is developed in standing Zen, which is an essential aspect of Shaolin Kjungfu training as shown here during an Intensibe Shaolin Kunghfu Course

Sifu, what do you think of couples attending the Intensive Chi Kung Course together? I have introduced my other half to some of your books and she finds them a great read and admires your clarity of thought.

We encourage husband and wife to practice chi kung together. This will bring a lot of benefits and joys to both. It is great if both you and your wife attend the same Intensive Chi Kung Course.

One of the many benefits of practicing high-level is developing mental clarity. You will have a chance to test your mental clarity acquired from chi kung to solve problems at the course.

If you had not practiced genuine chi kung, you would not have generating energy flow nor cosmic shower. You would have practiced "Carrying the Moon", which is a chi kung technique, as gentle physical exercise. If you had practiced well, you would have benefits like loosening of muscles and joints, and being relaxed.

In fact more than 80% of people who practice chi kung today do this. They practice chi kung techniques as gentle physical exercise, not as chi kung. No matter how well or for how long they have practiced, they will not have chi kung benefits like overcoming illness, having a lot of energy, attaining mental clarity and experiencing spiritual joys. They only have benefits of gentle physical exercise, like balance and elegance.

If you had practiced genuine chi kung, but without specifically learning the skills of generating an energy flow or a cosmic shower, your "Carrying the Moon" would result in some energy flow, but it would take a longer time.

Now, what would happen if you don't think of anything? You just perform "Carrying the Moon". Your practice will probably result in generating energy flow, because it is basic. It happens naturally when you practice genuine chi kung, whereas cosmic shower has to be activated.