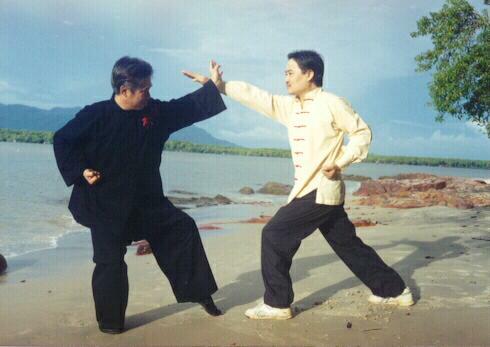 The primary purpose of kungfu, including Taijiquan, is for combat. If someone has practised kungfu for a reasonable period of time, say two years, and yet cannot apply what he has practised to defend himself, he has defeated the purpose of practising kungfu. Such an art, which is generally used for demonstration but cannot be used for combat, is sometimes referred to in idiomatic Chinese as “flowery fists and embroidery kicks”.

The objective of this section is to enable students to have a better understanding of the combat application of kungfu. What is shown here is mainly combat techniques. It is significant to note that techniques constitiute only one factor in effective combat, other factors include force, timing, judgement and temperament. In other words, merely knowing techniques alone cannot make you into a competent fighter. Nevertheless, the combat techniques shown here often reveal the beauty and profundity of kungfu that many students nowadays may have missed.