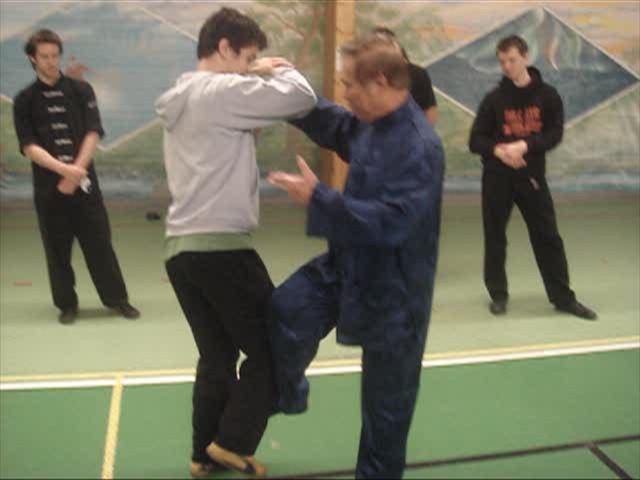 Sikung, you have mentioned about "Mind thinks, Events materialize". Can you please elaborate on it?

If I remember correctly, I once asked my sifu during causal conversation, "Sifu, what is the most advanced art in our school?"

This great universal truth was taught by the greatest teachers in the past, and confirmed by the most modern scientists today. Both ancient masters and modern scientists have asserted that our phenomenal world is a result of thought, not just your personal thought but the universal consciousness of mankind.

Look at the ocean, for example. We see majestic roaring waves. Look at the ground beneath our feet. We see a lovely carpet of grass and feel the ground is solid. But micro-organisms in the waves or in the ground will see the same reality differently. They may perceive the ocean or the ground as their universe. It is how our mind thinks, or interprets the energy that enters us through our sense organs, that events in our phenomenal world materialize.

The Buddha has taught that the three factors that materialize in our phenomenal world are thought, speech and action in that order of importance. Thought is the most important factor that decides how the future will unfold.

You may, for example, think that the world is unfair. Why should he earn thousands of dollars when you earn only a few hundred. The first to suffer from this negative thought is you. You feel envious or angry, and when you return home and your children gather around you, you would vent your anger on them. You blame everybody and feel miserable. Heart thinks and events materialize.

On the other hand, you can choose to have positive thought on the same situation. When you look at the rich man you see him as an example for you to emulate. You tell yourself that one day you will be like him, or even better than him. When you see you wife and children at home you promise yourself that you would work hard to earn more money so as to provide a more comfortable life for them.

With our Shaolin Wahnam training, you have mental clarity to set your vision and direction, and a lot of energy to travel along the direction to reach your vision. Arriving is a matter of time. Mind thinks and events materialize.

You may be rich but have negative thought. When you go to your office and see your staff, you grumble why you should pay them salaries every month. When you find another man richer than you, you become angry. When your wife calls you, you become annoyed, telling her not to disturb you as you scheme to beat the richer man. Mind thinks and events materialize.

On the other hand, you may be rich and have good thought. When you see your staff, you feel thankful that they work well to make you rich. You may decide to give them a bonus, which will make them and you happy, and which may in turn bring more profit for you. When you find another man richer than you, you feel happy for him.

You realize that your present wealth is more than sufficient to give you and your family a comfortable life, and you prefer to spend time with your family instead of competing with him. So, instead of waiting for your wife to call, you call your wife telling her you will return home to have lunch with her and your children. Mind thinks and events materialize.

When I wake up in the morning, I see everything is symbolized by "one", like one bed, one pillow, one door in my sleeping room and one staircase. When I eat my breakfast I see things that are symbolized by "two" , like a pair of chopsticks, a bow of rice and a bow of fish, a table and a chair, and a pair of shoes. When I go out, I see things that are symbolized by "seven", like I see seven people in the street, a bus with the number seven, and my watch showing it is seven o'clock. What does all this mean?

It does not mean anything. Just carry on with your practice. 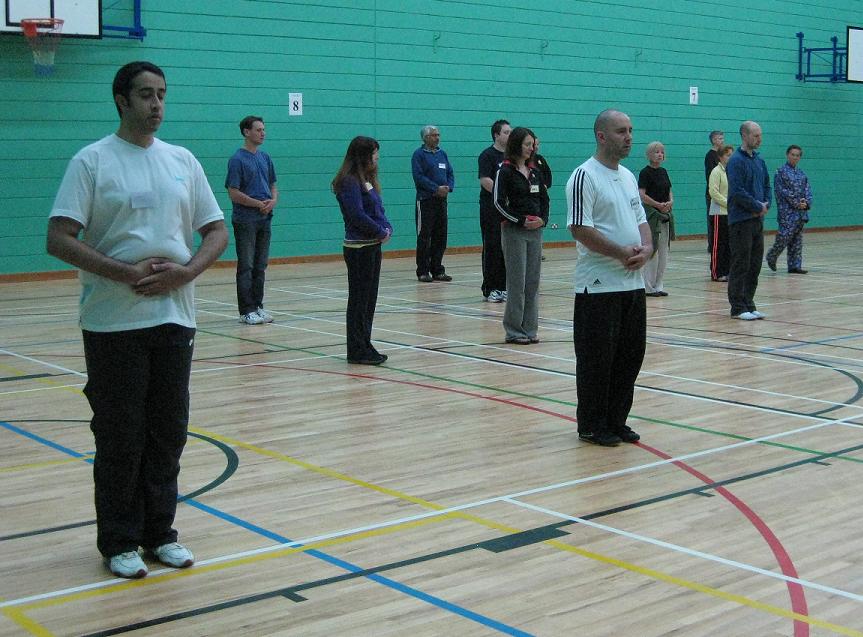 Sitaigung, you talk about the amazement stage and the amusing stage. Can you please elaborate on then?

The amazement stage and the amusing stage represent two important stages of our development.

The many case histories of our students recovering form so-called incurable diseases by practicing our high-level chi kung or of patients healed by us are amazing. So many of our students have recovered from cancer, depression, phobia, chronic pain, diabetes, asthma, heart problems, viral infections and various diseases considered incurable by conventional medicine.

Other people will find them amazing, or may not believe that these cases are true. But for us, these cases have become so common that they are no longer amazing. Rather, we move on to another stage where we find may these cases amusing -- in a good way.

For example, a student may ask me, "Sifu (or Sigung or Sitaigung), I have some back pain. Which exercise should I do?"

I would reply, “It doesn't matter which exercise so long as you have a good chi flow."

He may then ask, "Can I practice Lifting the Sky? Or should I practice Carrying the Moon?"

"It doesn't matter, so long as you have a good chi flow. Both are wonderful exercise. Choose any one."

"Can I perform both?"

"Which one should I perform first, Lifting the Sky or Carrying the Moon?"

"It doesn't matter. Make sure you have a good chi flow."

"It doesn't matter. You can do either way or both."

"Should I put my tongue up touching my palate? I've read some books that this will make the result better."

"No, don't do that. Just practice the way you have been taught."

"Should I direct chi to my back to remove the pain. I've read some books recommending this."

"No, don't do that. Just practice the way you have been taight."

It is quite amusing. We have moved to the amusement stage.

Actually I took only about 5 minutes to learn the technique of Abdominal Breathing. But it took me a few months to develop the skill, and a few more months before I could get the benefits. It took me more than three years practicing Abdominal Breathing before it evolved into Cosmic Breathing.

The main reason why I took more than a year to have the benefit of Abdominal Breathing, and more than three years to have the benefits of Cosmic Breathing is because I did not differentiate between techniques and skills. Like many chi kung practitioners nowadays, I thought (subconsciously) that if I practiced the technique long enough I would get the benefit. This is not so.

After practicing the technique for many months, I developed the necessary skills. It was only when I practiced Abdominal Breathing skilfully that I obtained benefit. When I did not practice skilfully I did not have any benefit.

But I was not aware of this situation or process at that time. In one month of practice, there might only be a few days when I practiced with the necessary skills. These days were not consecutive. So I did not have the benefit of accumulated result, which is very important in chi kung development.

Now I highlight the difference between techniques and skills to our students. More than that, I transmit the skills to them straight-away. In other words, instead of taking a few months to develop the necessary skills, they receive the skills from my transmission on the very first day. Further, the Cosmic Breathing skills that I transmit are of a higher level and more powerful than those I myself used when I practiced Abdominal Breathing. 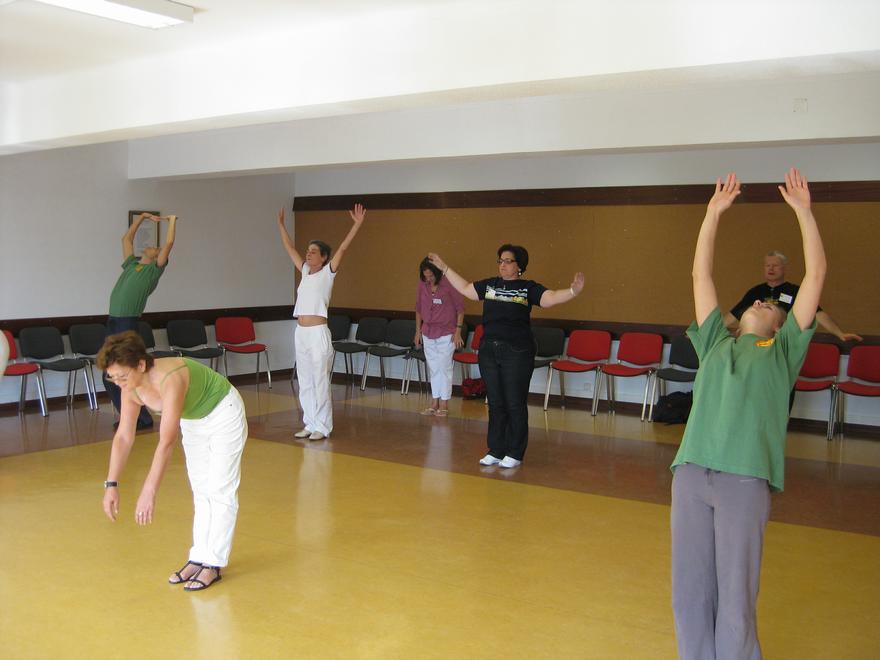 Students at a regional course in Portugal performing Carrying the Moon

Can you please explain the difference between Abdominal Breathing, Dan Tian Breathing and Cosmic Breathing? There seems to be some confusion in the use of these terms.

I shall first give a brief historical description of these arts in our school.

As I continued to practice Abdominal Breathing for many years, it spontaneously developed into Cosmic Breathing. I did not use the term "Cosmic Breathing" at that time though I was aware of the difference in their power and nature. I regarded it as a natural progression.

Sigung, our sifu told us to rest for 15 minutes after practicing chi kung before having sex. You just told us that we can enhance whatever we do, including sex, if we perform it in chi flow. I am a bit confused which advice should I follow.

Both advice is correct.

Waiting for about 15 minutes after chi kung before enjoying sex is to prevent a drain of energy. You have developed a lot of energy in your chi kung training. If you have sex immediately, you may drain a lot of energy away -- unless you wish to donate this energy to your sex partner.

As you know well, we are constantly improving our teaching methodology. Now we teach our students to have a flow, not a drain. If they have this skill, when they expend energy in what ever they do, including enjoying sex, new good energy can flow in. This will enable them to perform better and enjoy more.

Our Shaolin and Taijiquan students employ this skill when they spar. Thus, they can spar for hours yet do not feel tired or panting for breath.

We have not, and don't intend to -- at least in the foreseeable future -- to teach our students how to apply this skill in their sexual performance. But smart students can easily make the skill transfer. The key factor is to relax. 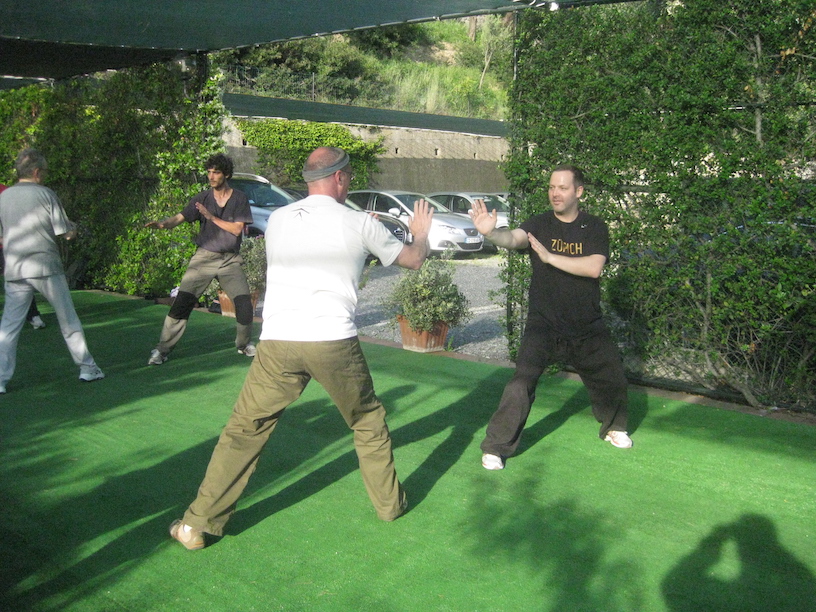 I am twenty seven years old and I am planning to start learning an internal art but I have no idea which style to choose.

If you ask me for my opinion, I would choose Shaolin Kungfu because I regard Shaolin Kungfu as the greatest martial art in the world. There are many good reasons for my choice.

Shaolin Kungfu has the widest range of techniques, and the deepest level of skills. It has produced the largest numbers of masters, generals and empire builders in history. It contributes to good health, vitality, longevity, mental freshness, and peak performance in our daily life. It leads to the highest spiritual attainment any being can ever attain. Please see my webpage Why Shaolin Kungfu is the Greatest Martial Art for details.

I would like to highlight the following two important points.

One, many people, including Shaolin practitioners, consider Shaolin Kungfu as an external art. This is a big mis-conception. There are more internal aspects in Shaolin Kungfu than in any other martial arts.

Two, genuine Shaolin Kungfu is very rare today. That is why many people may regard as non-sense the justification I mentioned above for claiming Shaolin Kungfu to be the greatest martial art. Without any investigation, they just think my claims are too fantastic to be true.

I understand Xingyi, Bagua and Tai Chi are considered the main three internal arts but if you had the choice to learn one art which would you choose out of Mantis, Tai Chi, Bagua, Baji or Xingyi?

While it is commonly believed that Xingyiquan, Baguazhang and Taijiquan are the three internal martial arts, and the rest is external, this belief is not accurate. In fact, much of Taijiquan practiced today is external and non-martial. In other words, most Taijiquan practitioners today have no internal force and cannot use Taijiquan for combat.

Nevertheless, if I had to choose amongst Praying Mantis Kungfu, Taijiquan, Baguazhang, Bajiquan and Xingyiquan, I would choose Taijiquan. It must of course be genuine Taijiquan, which again is very rare nowadays. Much of Taijiquan practiced today is just Taiji dance.