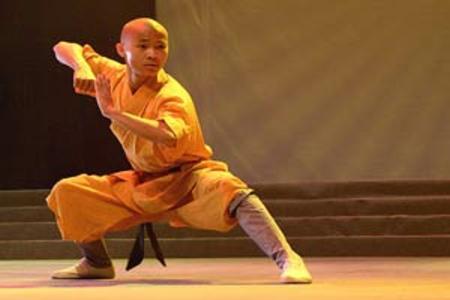 Have you heard of "Hokkien Sao Lim Kungfu" and its origin?

As I cannot find anything on the internet about it, it does not seem to be a very popular style. We use Shaolin stances, but normally hold our fists at breast level like in Wing Choon. Something untypical for a Southern style is that we use a lot of high kicks and jumps besides the typical punches and some chin-na techniques. Some techniques I also found in Wahnam, like "Hungry Tiger Snatches Goat".

It would be nice to learn more about the history and possible branches of our style if you have any information about it.

Holding the fists at breast level is typical of Hokkien Shaolin Kungfu, but high kicks are not. They are probably incorporated into your style by your sigung. It is no surprise that many techniques of your school are similar to those in Shaolin Wahnam because both came from the same source.

Shaolin masters from this Southern Shaolin Monastery on the Nine-Lotus Mountain escaped to Quangdong, resulting in many Shaolin styles, like Hoong Ka and Choy-Li-Fatt. This branch of Shaolin Kungfu was called Quangdong Shaolin Kungfu, or Kong Tung Siu Lam Kuen in Cantonese dialect.

After a year of 18 Lohan Hands I practised Sinew Metamorphosis (mainly "Immortal Wipes Eeyes") for about 6 months. I mainly felt my forearms charged with energy. After this time I started with the Flower Set and its soft internal force methods. When I had seen the tremendous force of my brothers at the Summer Camp I decided to focus on stance training to produce more jing than flowing force. I also enjoy dynamic patterns like Sinew Metamorphosis, Ta Chong and 18 Lohan Arts.

What are the best methods or exercises to strengthen jing? Is there a suitable substitute for stance training or should I try to focus on Horse Riding Stance and Golden Bridge again? Or will jing be strengthened by the dynamic patterns too, but slower? I do not worry about this while practicing, but I am curious about this matter.

The description above provides a general guideline. You may have some variations once a while. 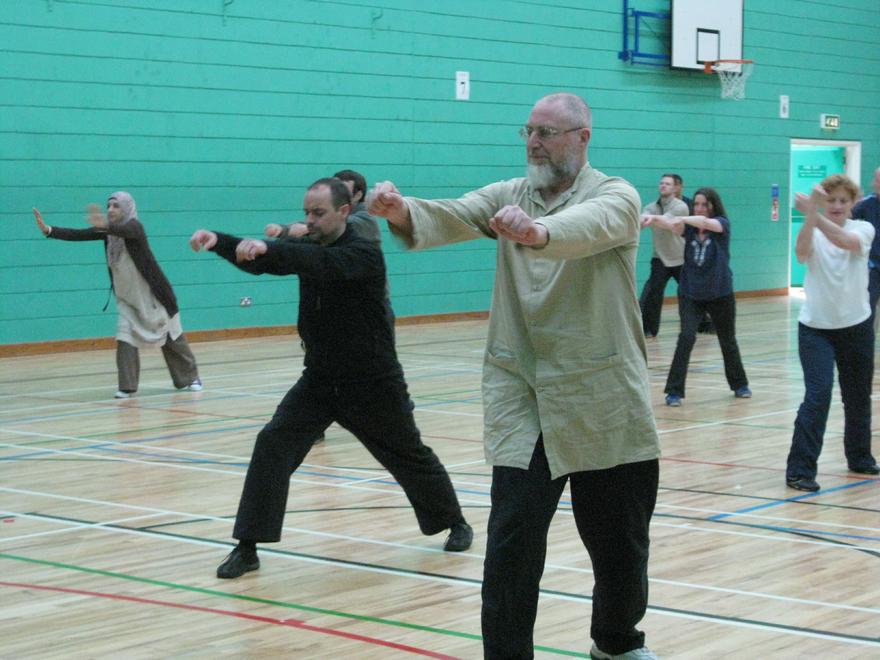 A force-training exercise from Eighteen-Lohan Art

After reading a book Siheng Anthony Spinicchia recommended on the Eight Immortals, I was puzzled about the fighting abilities of the Immortals. In the book, the Immortals win by using magic instead of kungfu. How have the heavenly techniques of the Immortals been passed to earth and later through time until now? Did they teach students before they left for heaven?

Nevertheless, Immortal Han Zhong Li and Immortal Lu Dong Ping were great warriors. The former was a general, and the latter an accomplished swordsman.

When I came home from the UK Summer Camp I had a week with symptoms of a cold, but the illness was only light and passed away quickly. About four weeks ago I caught a cold again which developed into an eye infection. My herbalist thought my lung energy was too weak and my liver energy too strong.

I was told to go to sleep earlier, but normally I use the time until midnight when my girlfriend is asleep to practise Kung Fu and I do Chi Kung in the mornings. My herbalist told me to switch the morning and the night sessions.

Could this recent ailments just be some kind of cleansing after the courses at the Summer Camp and some time of practising Cosmic Shower? Is it better to use the midnight energy for training or sleeping?

Yes, it was cleansing. The Summer Camp courses were very powerful, and a lot of cleansing resulted.

You need not worry about which organ system has more or less energy. You chi flow will take care of this.

Sleeping is important, especially when you have developed a lot of internal force initially. It allows your body to adjust to the tremendous amount of force gained. Later you may find that you sleep less.

Having learnt from us, whenever you practice kungfu, including the kungfu of your school, you are also practicing chi kung. So you need not separate chi kung practice in the morning and kungfu practice at night. You can practice chi kung and kungfu together.

In our school, less is often more. It appears that you are over-training. It is better to sleep before midnight than to use midneight to practice. Aim at quality rather than quantity. You will soon find that even when you spend less time on practice (and more time on your girlfriend, which is important), you kungfu development is better and faster. 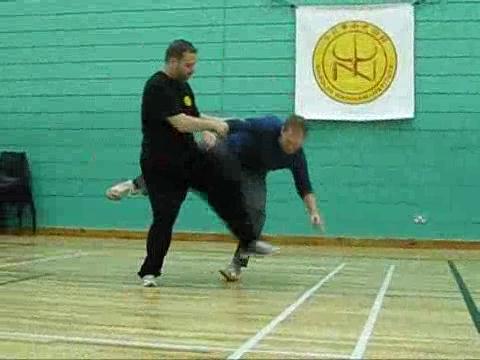 An application from the Drunken Eight Immortals

Regarding the Shaolin Eye Exercises, is it better to do the counting leaves exercise without wearing corrective lenses?

It is better to perform the eye exercises without wearing glasses or contact lens. Initially, if it is difficult to see without glasses or lens, you can use big-sized leaves or have the leaves near to your eyes. Gradually reduce the size and increase the distance.

For extreme nearsightedness, do the exercises change the football shape of the eye back to its normal round shape or do they just train one to focus enough to overcome the nearsightedness caused by an elongated eye? 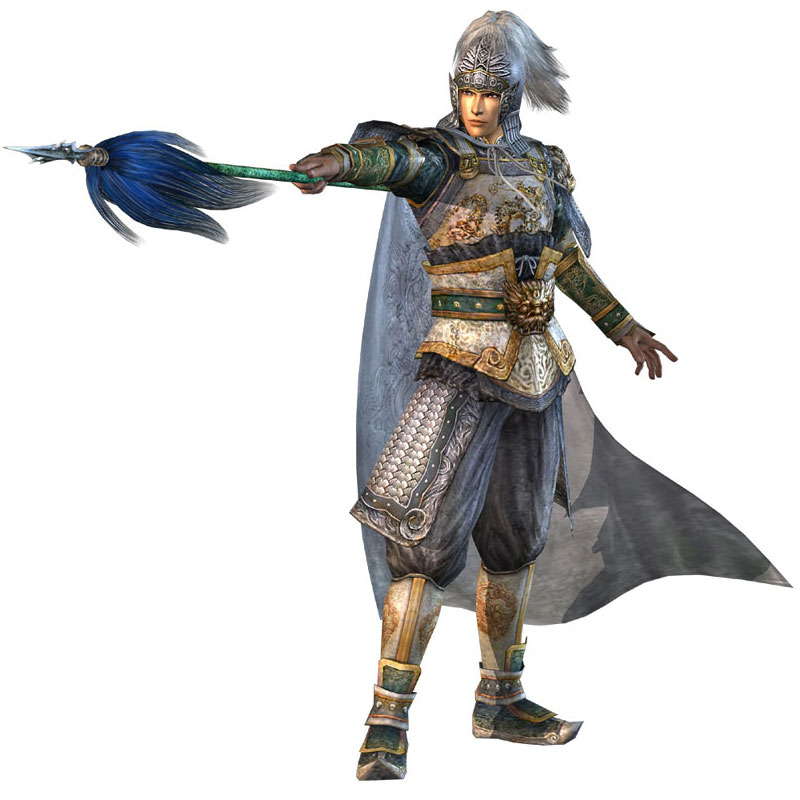 Having practiced with the help of your chi kung book, "Chi Kung for Health and Vitality", morning and night. I developed a bump on the vertebra located on the ming men. As I continued practicing, the bump got smaller but I got blisters on my left lower back which eventually disappeared but the ming men is still red. In a weird way it feels good, and my body tells me that bad energy is leaving my body. I shall be grateful for your advice.

Actually they died differently. Lu Pu was betrayed by his own lieutenant. The lieutenant was spanked by Lu Pu for some mistake. Bearing grudges, the lieutenant drugged Lu Pu, tied him up and offered him to his enemy, who killed him.

On the other hand, Zhao Yin won every battle he fought. This was due not just to his fighting ability but more to his brains. He lived to a ripe old age.

Having brains may prevent a person from dying unnecessarily, but may not necessarily enable him to live to a ripe old age. Practicing genuine chi kung will.

When he practices chi kung regularly, he ensures a smooth chi flow, which will result in him being healthy. As he continues to practice, he increases the vibrancy of his chi flow, resulting in him having vitality.

He continues his regular chi kung practice further, resulting in him having more energy than he needs. The extra energy will be stored in his dan tian and side meridians. This will give him a huge reservoir of chi, enable his chi to flow for a long, long time, giving him longevity.