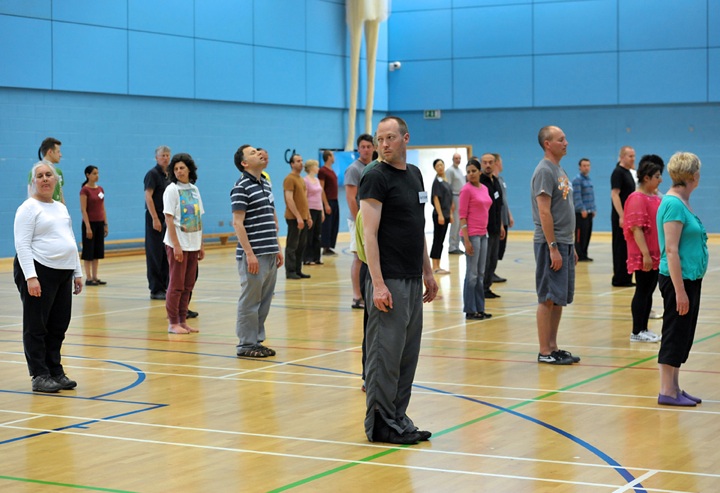 According to chi kung philosophy all diseases can be overcome

Can you tell us more about heart to heart transmission?

Heart to heart transmission is self-explanatory. It means the transfer of knowledge, skills, wisdom or realization from the heart of the teacher to the heart of the student. However, like many arts such as chi kung and spiritual cultivation, the uninitiated may still not understand the meaning even when it is clearly explained.

All great arts are not merely taught by a teacher to his students, but are transmitted by him to then from heart to heart. It is failing to appreciate this fact, mainly due to a lack of direct experience, that many people think, mistakenly, that they can learn great arts from books or videos, or that all teachers of these arts are the same.

It is also due to a failure to appreciate this fact that some people ask me what chi kung exercises they should practice to overcome certain illness. It is not the kind of exercises they perform, i.e. the techniques, but how they perform them, i.e. the skills, that are crucial in enabling them to overcome illness. In other words, even when they know the best techniques but lack the necessary skills, they would not overcome their illness. Skills are best acquired from a competent teacher. On the other hand, even when a person has only mediocre techniques but good skills, he may overcome his illness.

It is because of our understanding of this fact about techniques and skills, that we have become very cost-effective in our training. Indeed, we are cost-effective to a ridiculous extent, that our students can attain in one month what it takes even masters a year to attain!

This understanding between techniques and skills constitute a crucial part of heart to heart transmission. It is skills that are transmitted from heart to heart, not techniques.

Let us take Cosmic Shower as an illustration. An excellent technique for Cosmic Shower is Carrying the Moon. Students may practice Carrying the Moon correctly and diligently, but they may not have a cosmic shower. Indeed, most of them do not have even an energy flow. They practice the technique as gentle physical exercise, not as an art of energy.

Our students are very lucky. When they take a course on Cosmic Shower, the necessary skills are transmitted to them. By applying these skills they can have a cosmic shower in just one day! As I mentioned earlier, this is ridiculous, but true.

The transmission must be from heart to heart, not merely giving instructions from mouth to ear. Let us take an example. A teacher may ask his students to relax, which incidentally is a very important requirement in any internal cultivation. The instruction comes from the teacher's mouth, and enters the students' ears. But the students may not be relaxed. No matter how well they perform the techniques, they will not get the benefit of the art.

Are you able to treat schizophrenia? My son has audio hallucinations. They began in 2006. He was treated by a grand qigong master. The voices subsided for 2 years. They returned he recieve another treatment. However eventually the treatments stopped being effective. He continued his qigong exercises and herbs. It was not successful. I am still hopeful qigong can help. Are you able to successfully treat him?

According to qigong philosophy, there is no such a thing as an incurable disease. In other words, all diseases, including schizophrenia, can be overcome by practicing genuine, high-level qigong.

Nevertheless, we are happy and proud to say that many people who suffered from schizophrenia completely recovered their good health after practicing qigong learnt from us. This webpage gives some examples of remarkable recovery. You can also find many other examples from my website and at our Shaolin Wahnam Discussion Forum.

I would recommend that your son attend my Intensive Chi Kung Course. Please apply to my secretary for registration if your son wishes to attend. Besides overcoming illness, the course gives many other benefits. 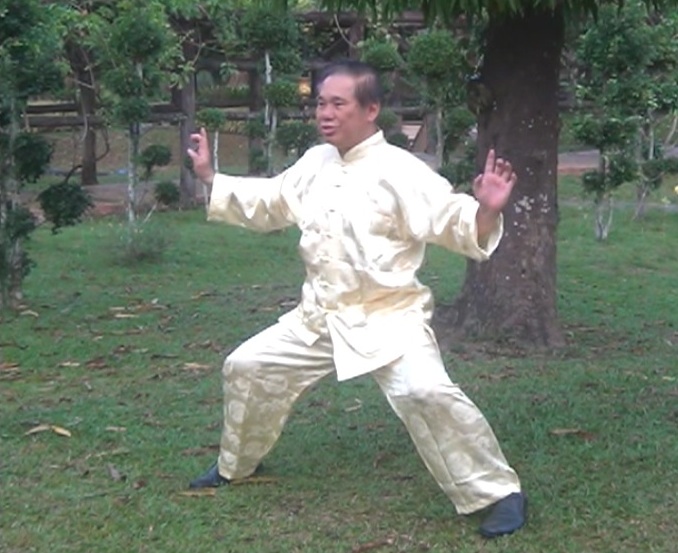 One thing that confuses me, though, is the methodology of training. The sifu told me that the first two stages of his school's training were predominantly external, followed by internal cultivation.

I remember you mentioned that during your training with Uncle Righteousness, he emphasized using strength and striking a wooden dummy. I also remember that one of your sihings who specialized in the Triple Stretch set broke a staff he was using when his internal force shook through it.

Did Uncle Righteousness teach in a similar way to this school, first emphasizing "using strength" and then teaching internal force in later levels, for example when teaching Triple Stretc


Editorial Note: Fredrick's other questions can be accessed at June 2015 Part 2 issue of the Question-Answer Series.

Almost all schools other than the so-called internal schools train in this way. They start with external training. Because of their dedicated training over a long time, they develop internal force, often without calling it internal force.

The so-called internal schools start with "soft" training (but not internal training). Even when their students are dedicated over a long time, they never develop any internal force, though sometimes some of them talk about internal force as if they have it.

This was the reason why your sisook, Anthony Spinicchia, told us in Hawaii that he found "external" masters had more internal force than so-called "internal" masters.

Our school is a rare exception. We have external and internal, hard and soft training right at the start.

I've noticed that the students who are more senior than me were using a lot of tension when practicing the greeting pattern and beginning section of the Taming the Tiger set. Sifu wrote a blog post recently hypothesizing that some students who saw their masters demonstrate force in a manner that caused their hands and arms to vibrate, tried duplicating the vibration, but with muscular tension. Many of the demonstrations I've seen on YouTube of practitioners from the Hoong Ka lineage show a lot of tension with their lineage greeting pattern, Five Animals set (especially the Dragon section of the set), and Iron Wire.

You sifu is right. The masters had internal force, and the students did not have. The students imitated the external form of the master without knowing its inner significance. This is known in Chinese (Cantonese) as "zi kei phew ye pat zi kei nui", which my Wing Choon master, Sifu Choy Hoong Choy, often said.

This imitation was most noticeable in Silat, the Malay art of attack and defence. I believe in its early history, Silat was much influenced by Baguazhang. Many Baguazhang masters from the Chinese imperial guards came to Indonesia and Malaysia (called Malaya at that time) to teach the guards of the local sultans. The masters had much internal force and their hands vibrated. The locak students tried to imitate them, with the result that today many Silat practitioners purposely move their fingers often without knowing why.

At least these Silat students do not harm themselves. These movements are often called "bunga" or "flower", i.e. meant for show. Their combat applications are called "buah", or "fruit".

But tensing their muscles in their attempt to produce force, like what many Hoong Ka students do, can be very harmful, and worse, their harm is insidious. Their tension is due to practicing internal force training methods, especially in Iron Wire, as isometric exercise. They can develop a lot of power, but the power comes from muscular strength and not from internal force. Some of them even go a step farther by lifting weights. 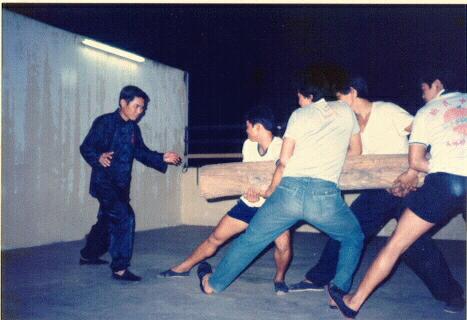 You just avoid muscular tension. You don't have to purposely emphasize consolidating and vibrating your internal force and later letting it flow. You just practice the methods as you have learnt them, without adding anything extra.

It is actually very simple. If your teacher asks you to do ABC, you just do ABC. You don't do ABC and then add D. You also don't do CBA or EFG.

Of course you must, before you started to learn from a teacher, ensure that he is competent, and his students have the result practicing the art will give.

To link up with my questions with the Small Universe above, are Hoong Ka practitioners known for attaining the Small or Big Universe? I remember hearing in the discussion forum that some people felt the Iron Wire set was akin to a Forceful Small Universe.

But strictly speaking these successful course participants did not attain the Small Universe in a few days. They had already spent at least two or three years, usually more, accumulating their chi at their dan tian. I took a few days in the course to activate their small universal chi flow. 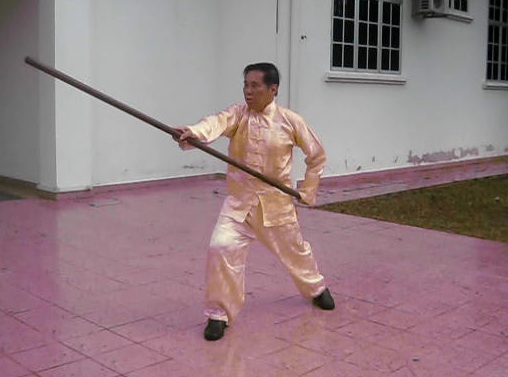 Lau Ka Kungfu is well known for its staff

As an interesting side note, when I asked the Hoong Ka sifu about his school's Iron Vest and Golden Bell, he said that some of the benefits he most enjoyed about were a greatly enhanced immune system, longevity, and overall youthfulness. Since he is about 59, but he looks 30 and is very physically fit and agile in addition to being full of laughter, I'm very certain he has attained good levels in his training.

The Hoong Ka sifu is an inspiration.

Those who harm themselves by lifting weight or generous exchange of blows, are angry and depressed, and look 59 when they are just 30, should learn from this sifu's example, if not actually from him in person.

I also had a question about some kung fu history. According to the Hoong Ka sifu, some schools of Hoong Ka incorporated Lau Ka kung fu into their training, and this school is one of them. I began learning a set named Lau Ka Kuen and it feels similar to the feeling I get from practicing the Cross-Road at Four Gates set. Could you explain a little about Lau Ka kung fu's history and general characteristics?

This is no surprise as both Hoong Ka Kungfu and Lau Ka Kungfu came from Southern Shaolin, and Cross-Road at Four Gates was the fundamental set at the southern Shaolin Temple at Quanzhou.

One of these Shaolin masters escaped to Guangxi Province in the western part of South China and taught Shaolin Kungfu to Lau Sam Ngan.

Lau Sam Ngan was his nick-name, which means "Three-Eye Lau". During a sparring using staffs with his master, he was hit on the forehead, and a scar remained like a third eye.

Lau Sam Ngan spread this style of Shaolin Kungfu, which was name after him, meaning Lau Family Kungfu. It is a hard, external style, using low stances and short strikes. Lau Ka Kungfu is well know for its staff.