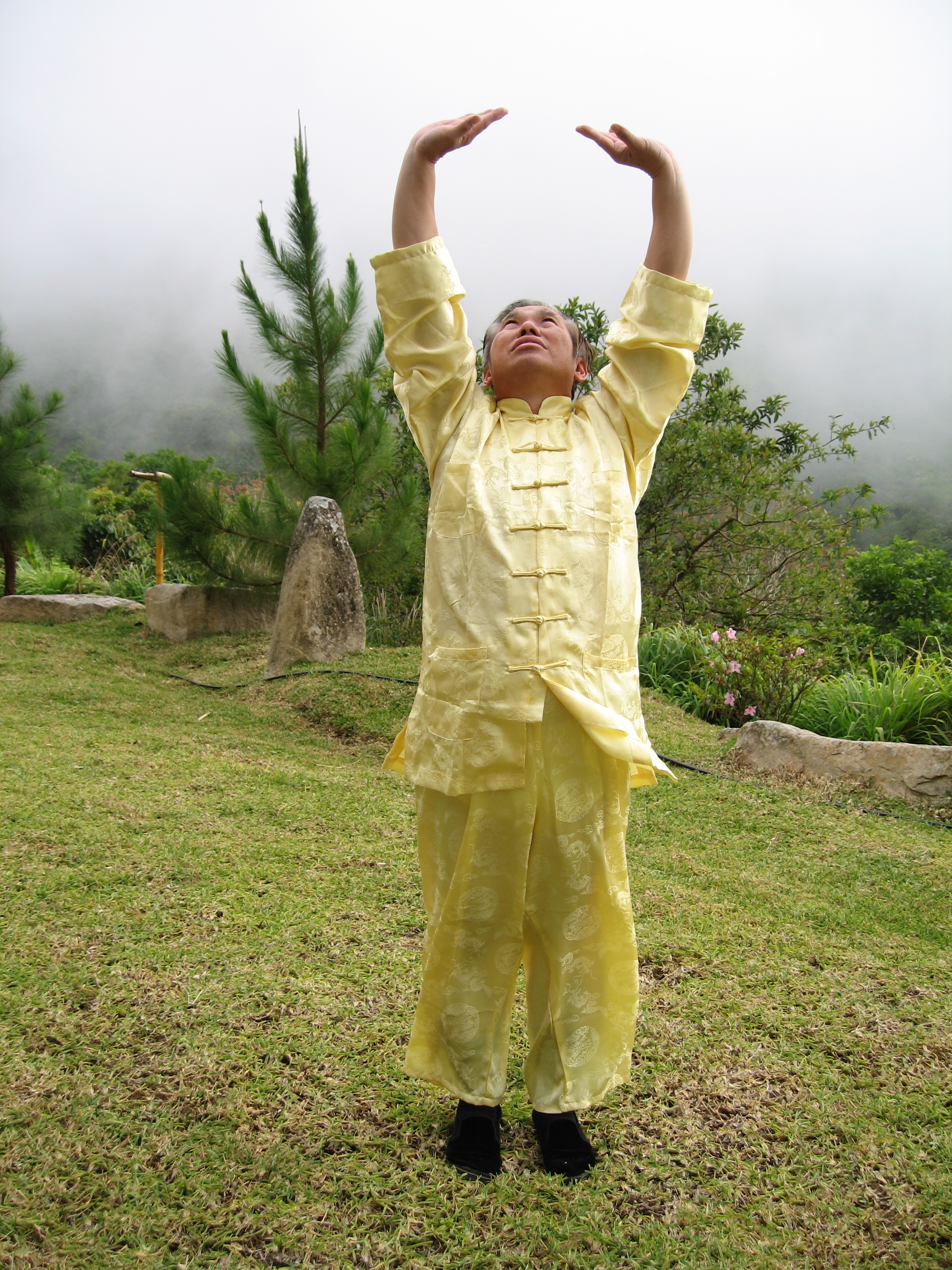 Lifting the Sky, the wondrous exercise of Shaolin Wahnam

There are so many chi kung exercises in Shaolin Wahnam. Which one is your favorite and why?

My favorite chi kung exercise, the one that I have performed the most often, is Lifting the Sky.

The first chi kung exercise I learned was the Horse-Riding Stance which I learned from my first sifu, Uncle Righteousness, but I practiced it as kungfu and not as chi kung. At that time my kungfu, like the kungfu of most people today, was physical, unlike now in Shaolin Wahnam where our kungfu is also chi kung and meditation.

When I learned from my second sifu, Sifu Chee Kim Thong, I learned San Zhan, which was the fundamental kungfu set in Wuzuquan to develop internal force. In other words, San Zhan was chi kung, or an art of energy, but at that time I did not have this understanding and practice it at a physical level, albeit in a relaxed manner without tensing any muscles.

Incidentally this raises an important point. Chi kung has to be performed in a relaxed manner, but performing an exercise in a relaxed manner does not necessarily make it into chi kung. I practiced San Zhan for two years but did not succeed in develop energy to be converted into internal force.

However, besides its sentimental value, there are other good reasons why Lifting the Shy is my favorite chi kung exercise:

Lifting the Sky is a wondrous exercise in Shaolin Wahnam.

Both sources are correct, or both are wrong, depending on one's perspective! The following brief historical background will provide an answer.

It is technically incorrect to call Zhang San Feng or Chen Wang Ting the founder of Taijiquan, because no one person found the art as the art was evolved from earlier practices.

The Chinese term, "first patriarch", is more appropriate. Both Zhang San Feng and Chen Wang Ting are regarded by different people as the First Patriarch of Taijiquan.

There was no Taijiuan during the time of Zhang San Feng, so technically he could not be called the founder or first patriarch. The art that Zhang San Feng practiced was called Shaolin Kungfu.

Wudang Kungfu of Zhang San Feng was first taught exclusively to selected disciples, but four centuries later it was taught also exclusively in the Chen Family Village in the Province of Henan not far from the northern Shaolin Monastery. Here, Chen Wang Ting, a retired Ming general who refused to work for the succeeding Qing empire, employed yin-yang philosophy, which explained the existence of the Cosmos, or Taiji in Chinese, to describe Wudang Kungfu. Eventually this Wudang Kungfu was called Taijiquan, which means Cosmos Kungfu. 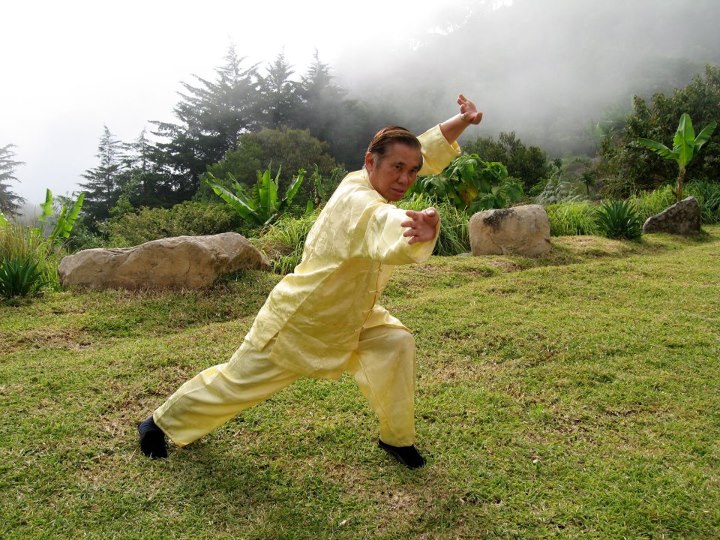 Besides the stances, what exercises develop internal force at the legs?

Besides the stances, two excellent exercises that develop internal force at the legs are Three Levels to the Ground and Bear Walk.

I have used these two exercises frequently to help many people generate an energy flow, which is a necessary ingredient to build internal force, to help them overcome their leg problems. It is unbelievable but true that some of them came in wheelchairs or with walkers, but could walk again without these aids after performing Three Levels to the Ground and Bear Walk.

I myself used Three Levels to the Ground a few times to overcome some soreness at my knees or injures due to kungfu training. The exercise was very effective.

Besides the obvious difference in form, what is the main difference between Three Levels to the Ground and Deep Knee Bending? 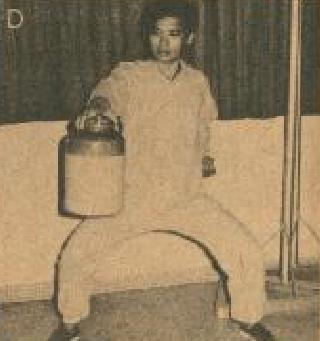 Would it not be beneficial for students to lift weights of 1000 jins or practice the Art of Pushing Mountains? Or is the reasoning behind refraining from such skill training because Shaolin Wahnam specialties are One Fnger Zen, Golden Bell, Tiger Claw, and Golden Bridge.

Unless one intends to take part in weight-lifting or body-building competitions, it is not a wise use of time to train to lift weights of 1000 jins or 1000 pounds.

Pushing Mountains is one of the exercises in our Eighteen Lohan Hands. We practice it very often, and it gives us a lot of benefits.

The following are some good reasons why we do not use many of the common methods used in many other schools, like lifting weight, hitting a sandbag, striking a wooden man, rope skipping, and long distance running:

We in Shaolin Wahnam are very lucky to have training methods that were kept as top secrets in the past. We have found the methods very useful and our training has enriched our daily life.

When you lift weight, hit a sandbag or a wooden man, do rope skipping or long distance running, your benefits are localized and limited to the activities related to your training. You may, for example, be able to lift your opponent, have a powerful punch, strong arms, and more stamina in your sparring. But you are not healthier, do not have more zest for life, do not think more clearly and decisively, and do not perform better in your work and hobbies.

The benefits from our training methods are holistic and versatile. Besides having all the benefits the above methods can give, we enjoy many more benefits like better health, vitality, mental freshness and clarity, quick decision making, and peak performance in our work and play.

The above methods are limited by age, size and gender, but ours are not. A slender, elderly woman using our training methods can perform better than a young, strong man using the above methods.

Worse, the above methods are insidiously injurious to health, vitality and longevity! It is now an open secret that top martial artists using the above methods are becoming more unhealthy the more they train! Why would you want to sacrifice your health, as well as endure pain, pursuing a hobby?

How would it not be beneficial to increase the power of your shoulders and forearms for use in Tiger Claw thrusts and swipes? And if the body can harmonize the 6 types of training why would external movements hamper chi flow?

If you have a better method like we have, which is not only not harmful but actually contributes to your health, vitality and longevity, you will be a fool not to use this superior method.

I do not know what you mean by the six types of training. External movements when performed correctly not only do not hamper chi flow but also promotes it. Chi flow contributes to good health, vitality and longevity.

But if you tense your muscles, which you will inevitably do when lifting weight, hitting a sandbag or striking a wooden man, or stress your internal organs, which again you will do when you do rope skipping or run long distance, you will hamper chi flow, thus distracting from your health, vitality and longevity. Is it worth to sacrifice your health for a hobby? 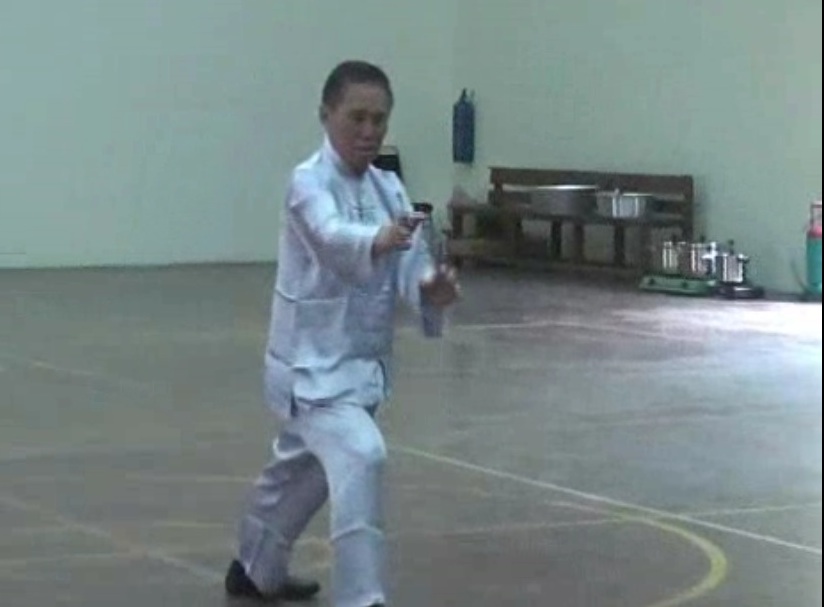 Grandmaster Wong teaching "Fierce Tiger Cleanses Claws", an internal training method that is less demanding but produces more powerful and better results than external methods, in a chin-na course in Sabah in 2008

The answer that training both internally and externally will impede one another is something I do not find to be true in my practice. This answer would seem insufficient. It is an answer that does not quite reach the heart of the concerned which is that I believe many students at Shaolin Wahnam would benefit and enjoy a more balanced external and internal training type.

It is not only not true in your practice, it is not true in all sensible practice. As mentioned earlier, the ideal of past masters was "internal and external double cultivation".

But external cultivation does not mean punishing yourself with external methods, which is sadly what many martial artists today seem to do. They push themselves beyond their normal limits to lift weights, run long distance, hit sandbags and wooden men. They sustain injuries that are routinely left unattended to!

I find it hard to spend 1000 dollars or more to learn from someone who would surely disagree with me. Please do not say to find another master as I have never seen a single master or fighter of any style that matches my expectations. I like Sifu because he is an intellectual and his ideas are well formed.

Thank you for your compliments.

If your views are right and beneficial, of course you should keep them, unless you find a change will bring you better results. But if you find your views wrong or detrimental to your health and happiness, would you be sensible enough to change them?

You may be pleased to know that many people borrowed money to attend my intensive courses, and they returned to honestly say that the benefits they got were more than 10 times the fees they paid.