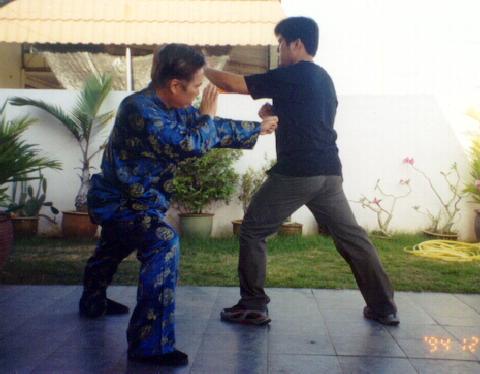 Grandmaster has often said that he remained unbeaten in his early days not because he was combat efficient but because he was smart; he spent a lot of time preparing for his upcoming free sparring

Sigung, you were unbeaten in sparring in your young days. Can you please share your secret with us?

In my younger days, especially between about 20 to 40 years of age, I spent a lot of time looking for sparring partners. At first I could beat them not because I was good but because I was smart. I chose opponents whom I had confidence of beating.

I made my victory doubly sure by doing a lot of homework, i.e. by practicing over and over again sequences which I used in the sparring. I devised the sequences from the way I expected my opponents would fight. This was not difficult because most of my opponents then were Taekwondo and Karate exponents, with some Boxing and Judo practitioners, and the way they fought was quite stereotyped.

For example, if I had to spar with a Taekwondo black-belt, I knew that he would probably start with some jabbing or side kicks, then round-house kicks, and eventually reverse round-house. So I would avoid his initial jabbing and side kicks, slant my body backward to avoid his round-house kicks, and when he executed a reverse round-house I would swiftly move forward with a coup de grace. I would practice this sequence many, many times, sometimes with modifications. When the actual situation occured during sparring, and this planned scenario almost always happened, I could use my practiced sequence to defeat my opponent easily. I always gently tapped my opponents; I never hurt them.

Having learnt from Sifu Ho Fatt Nam, my combat efficiency, including my internal force, improved tremendously. But initially I still used the same strategy. I chose sparring opponents whom I had confidence in beating, and I did a lot of homework. But gradually I did not have to do much homework as I could respond spontaneously and correctly to opponents' attacks. As I became confident of my combat efficiency, I did not go out to look for sparring opponents.

I always used kungfu, including good stances, in my sparring. I never used Kick-Boxing, Muay Thai or any other martial arts, although I sparred with opponents from all styles. The difference was that in my earlier years of sparring I used simple punches and kicks, whereas in my later years my techniques were more sophisticated, like felling and chin-na. I discovered that when I used sophisticated kungfu techniques, my opponents just did not know how to defend against them.

So, if I have to give a secret for my unbeaten sparring record, I would say that I used a superior fighting art against opponents whose fighting arts were inferior to mine. Presuming that the skill levels were about equal, if I used simple punches and kicks, my opponents would have no difficulty defending against them. But if I used sophisticated techniques, like subtle felling and chin-na attacks, together with tactics and strategies that created situations for me to apply these attacks, my opponents had no techniques in their repertoire to defend.

What are the effects of over-training?

For convenience, over-training may be divided into three stages.

At the most serious level, a practitioner who has over-trained becomes very weak and sick, or may even die. It is unlikely that practitioners who have over-trained will arrive at this serious stage, certainly not in our school.

But in my younger days, before I started Shaolin Wahnam Institute, I met a well-known kungfu master, who was a daughter-in-law of a kungfu patriarch, who either had over-trained or had practiced wrongly. As I knew him previously he was strong and full of vitality. When I last saw him, he was extremely weak and sickly. I regretted that I did not know chi kung healing then, or else I would have helped him recover.

The intermediate stage of over-training was when over-cleansing was clearly noticeable. Over-cleansing is the result of over-training, but practitioners are often confused over both these conditions. The symptoms are pain, tiredness, sleepiness and feeling of nauseousness. The practitioner who has over-trained feels unpleasant and uncomfortable, and is sometimes sick.

At the beginning stage of over-training, the practitioner feels tired and sleepy after his chi kung training, instead of feeling energised and fresh. The symptoms of cleansing are mild and may not be noticeable. Many practitioners over-train mildly at one time or another, and he will soon adjust to the excess energy from his training even without doing anything special. 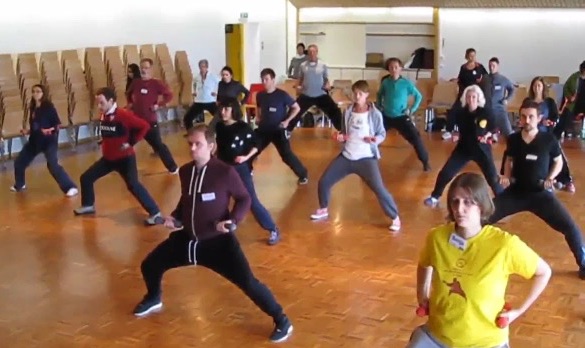 What a typical Shaolin Wahnam student achieves in one day, it took Grandmaster Wong more than a month to achieve in his student's days. Hence, it is important to guard against over-training.

In a chi kung class, people had different diseases but they overcame their diseases by practicing the same exercises you taught. How did chi kung know which disease to cure?

Chi kung works at the root cause, which is energy blockage. Other Chinese therapeutic methods, like herbalism and acupuncture, which also deal with energy blockage, work at higher hierarchical order. An acupuncturist or a herbalist will find out where the energy is blocked, and applies acupuncture or herbs to clear the blockage accordingly. Hence, in other Chinese therapeutic methods, correct diagnosis is very important.

It may sound ridiculous to those not familiar with chi kung philosophy that diagnosis is not necessary in chi kung healing! This is because chi kung deals with the root cause. Once the energy blockage is cleared, the patient recovers as a matter of course.

Different students in a same class might suffer from different diseases, like rheumatism, diabetes, cancer, chronic infection, and depression. But regardless of what the disease was, the root cause was energy blockage. Once the energy blockage was cleared, the patients recovered.

How did the chi flow know where the energy blockage was? Or, how did chi kung know which disease to cure?

It was a natural characteristic of chi flow to flow from high energy level to low energy level. Disease areas were areas of low energy level where there was insufficient energy to perform natural physiological and psychological functions to maintain normal good health.

The energy generated by practicing genuine chi kung would naturally flow to these low energy areas to clear the blockage. When the blockage was cleared, the students would recover, regardless of what diseases Western medicine might call them, as their energy flowed to these areas to resume natural physiological and psychological functioning to restore good health.

Can we transmit chi to friends to clear their blockage and help them recover?

You can but you may not. In other words, it is within your ability to do it, but you should not do it. In fact, every person has the natural ability to transmit chi, or energy, to another person. Mothers do this to their babies when the mothers comfort them. When your girlfriend is cold, if you hug her you transmit chi to her to warm her.

But unless you are trained, the chi you transmit to friends to help them clear their blockage is unlikely to work. You may harm them and harm yourself.

If your friends' energy is blocked, which is the reason why they are sick, adding more chi to them will aggravate their blockage causing more harm. Their sick chi may back-flow to you making you sick too.

Transmitting chi to patients to clear their blockage and help them recover is an important part of chi kung healing. A chi kung healer must be properly trained. Chi kung healing is not something any person can play about with. 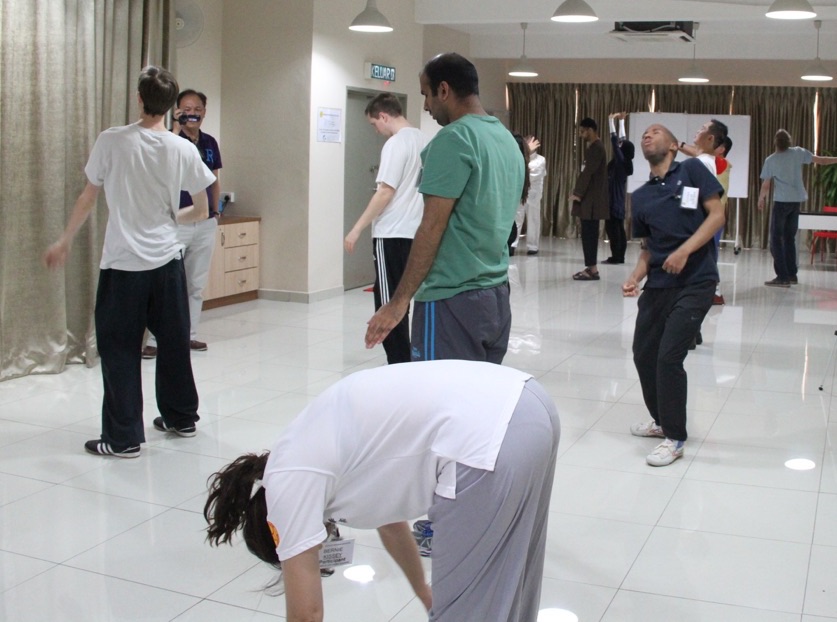 Many people may find it hard to believe, but practicing high-level chi kung can overcome aby illness

Some schools pay much attention to visualisation. Can you please tell us more about visualisation in chi kung training?

As most chi kung practitioners practicing genuine chi kung operate at the form level, where they perform many chi kung techniques for a long time and get some chi flow, whereas we practice chi kung at all the three levels of form, energy and mind, our benefit is 10 times more than what most other practitioners get.

Many practitioners, especially those who learn from books and videos, confuse visualisation with intellectualisation. They think they visualise when they actually intellectualise.

We generally use visualisation in our advanced chi kung exercises, though they are some exceptions. Two remarkable exception are Sinew Metamorphosis and Cosmic Breathing which are very powerful. Examples of advanced exercises where visualization is needed include Bone Marrow Cleansing and Expanding into the Cosmos.

What, in your opinion, will Shaolin Kungfu and Taijiuan be in a hundred years from now?

In my opinion in a hundred years from now more people will practice genuine Shaolin Kungfu and genuine Taijiquan, instead of practicing Shaolin forms for demonstration or for free exchange of blows, and Taiji dance. The total number of people who practice the genuine arts will still be small, but it will be bigger than the number now where most people, despite their good intention, cannot differentiate the genuine from the bogus.

It is precisely to preserve genuine Shaolin Kungfu, and later genuine Taijiquan, that I established Shaolin Wahnam Association in the early 1980s, which later evolved to our school, Shaolin Wahnam Institute, in the middle 1990s. We have progressed very well. We now have more than 60,000 students spread over more than 35 countries in the world. Even if I were to retire tomorrow, our Shaolin Kungfu and Taijiquan as well as chi kung will continue to spread as we have very good instructors. 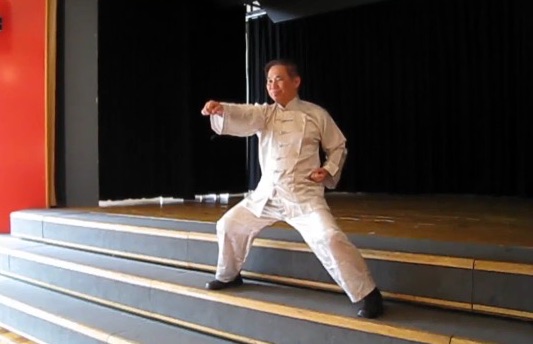 Internal force is not only used for combat; more importantly it is used to enrich our daily life

What is the difference between chi kung and nei gong?

The two terms, "chi kung" and "nei gong", can be used interchangeably, i.e. they have similar meaning though the connotation may be different. Chi kung is a modern term, nei gong is more classical.

In this connection, most of our chi kung exercises are more aptly described as nei gong than as chi kung, especially when chi kung has today degraded into gentle physical exercise, or "ti cao" (pronounced as t'i c'ao) which is bodily exercise. But we still call them chi kung exercises because the term "chi kung" has been established.

It is like asking what we are to do with money when we have earned a lot of money. Use it, force or money, wisely.

There are three main functions we can put internal force to use:

Maintaining life is the most important function of internal force. It is also the function that many people with internal force, including genuine masters, fail to realize. The force that changes the breakfast you ate into blood and flesh as well as vital energy is internal force.

The second function of internal force is to enhance life. It is similar to but not the same as the first function. Enhancing life can be manifested in many ways. Having zest in your work and joy in spending time with your family are some of the manifestations of enhancing life.