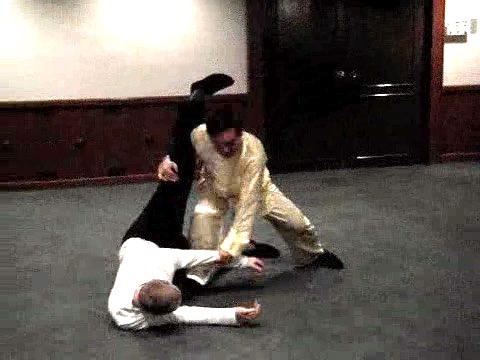 You mention in your website that a real kungfu master would find a Siamese boxer formidable. Does Siamese Boxing practice internal force? What makes a Siamese boxer so hard to overcome?

I knew my sifu's opinion was invaluable. He was a former professional Siamese Boxing champion, earning his living in the boxing rings and having fought literally hundreds of matches. Later when he helped his sifu to teach Shaolin Kungfu during a time when challenges amongst masters were not uncommon, he had been challenged by many martial artists and he defeated them all.

So I asked my sifu why he thought Siamese Boxing was so formidable. He said that many people thought Siamese Boxing was simple (when compared to kungfu, for example), but actually it was profound and very effective for fighting. Each technique, each movement was the result of years of actual fighting. If a technique was not useful, it would have been discarded by the professional fighters.

It looked simple, but Siamese Boxing was actually very tricky, my sifu explained. There were many feign moves, which would turn out to be real attacks if the opponents could not respond efficiently. When you blocked a punch, for example, you would find his elbow coming to your jaw. When you avoid his elbow, he would grab your neck and spring up with a knee strike at your ribs.

Siamese boxers were small-sized but they were very tough. Through years of training and actual fighting, they had naturally developed “Iron Shirt” whereby taking a few punches and kicks, which might be devastating to other people, would be nothing much to him.

They were also very powerful and very fast. A typical Siamese boxer, for example, had to kick at a “pinang” tree trunk a few hundred times a day, everyday for many years. Unless one has tremendous internal force, if he blocked a Siamese boxer's kick he would have his arm fractured. Even a kungfu master, especially when the standard of kungfu was so low today, would find it extremely hard to fight with a professional Siamese boxer.

The above is taken from Question of 3 December 2002 Part 1 of the Selection of Questions and Answers.