IS GENUINE KUNGFU NOT PRACTICAL ANYMORE? 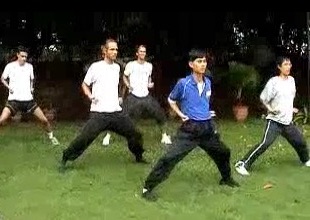 I also would like to say something about the new “reality based combat fighting” styles. They claim that traditional martial arts are out-dated. I have to ask how has hand to hand combat changed in the last 2000 years? The human body hasn't changed (2 arms, 2 legs, etc.). In self defence the only weapon that is new is the gun. A knife is still a knife, a club is a club. In the past people had swords and staffs and other hand held weapons. I can't see how a kung fu style created 500 years ago would now be ineffective? All the “reality guys” claim traditional martial arts are not practical anymore. I hope you can help with my questions.

You are right. A kungfu style created in the past is as effective now as before. The “realty guys” as well as all those who claim that traditional martial arts are not practical anymore, are mistaken.

But what is really shocking is that many kungfu practitioners, including some world-known masters, have the same opinion as the “realty guys”. These kungfu masters explicitly say that kungfu techniques cannot be used for fighting! Thus, although they teach traditional kungfu forms in solo practice, they teach Kick-Boxing or free-style fighting in their sparring. You can readily confirm this if you spend some time surfing the internet to find out what some of these world-known kungfu masters teach.

While I respect the honesty of the "realty guys" — they command more respect than kungfu masters who cannot use their kungfu for combat but pretend they can and therefore mystify kungfu to hide their incompetence — the attitude and teaching of the "masters", especially when they are often regarded as authority by the uninformed public, could lead to genuine, traditional kungfu disappearing from the world!

This ridiculous situation, when even kungfu practitioners and masters believe that kungfu is outdated and cannot be used for fighting anymore, is due to kungfu having lost its essence as a martial art. What is being passed on is only its external forms. Internal force training and combat application using typical kungfu patterns are lost. The inevitable result is that kungfu practitioners today belong to two main groups — those who can only perform kungfu forms but have no combat ability, and those who perform kungfu forms but use other martial art techniques for combat. We in Shaolin Wahnam are amongst the very rare exceptions who still develop internal force and still use kungfu forms for fighting.

We know from direct personal experience that traditional kungfu is not only not outdated, not only it is still combat effective, but actually it is even more practical in helping us to cope with many modern day problems. We do not glorify fighting and would prefer not to fight if there is a choice, but we are proud to say that my teachers, myself and many of my students have used kungfu successfully not just in free sparring but in real fights. Some of these fights, especially during the times of my teachers, were life-death affairs.

More significantly than in real fighting, traditional kungfu has enabled all of us in Shaolin Wahnam to enrich our lives and the lives of other people. Some of my students could be dead or still seriously ill if not for our traditional kungfu training. The vitality, mental freshness and inner peace that enable us to live everyday joyfully and meaningfully are wonderful benefits which the “realty guys” and those who think traditional kungfu outdated find hard to believe possible.

The above is taken from Question 3 of October 2007 Part 2 of the Selection of Questions and Answers.