ON GOD, BUDDHA AND IMMORTALS 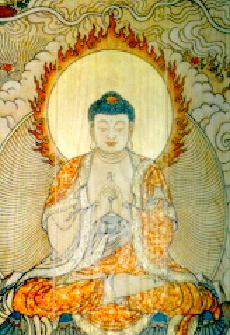 The Buddha praching to immortals and gods

It is stated in the Bible we should have no other Gods. For it is a sin to pray to any other than God. But, it seems many in the East seek assistance from Buddhas and Immortals. Is this not a sin and a departure from the truth?

A question like the above is interpreted, or mis-interpreted, in different ways according to the levels of understanding of the persons involved.

At the ordinary level interpreted by ordinary people, where the concept of "God" is interpreted as the same in both instances above, i.e. in "other Gods" and in "other than God", the question becomes enigmatic. If there is only one God, then it is a sin to pray to other Gods. On the other hand, if there are many Gods, then it is not true to say there is only one God. Such an interpretation, when carried out to the extreme, often led to bloodshed and wars.

The truth is that the concept of "God" is different in both cases. It would be clearer to use a small letter "g" for "other gods", and a capital "G" for "God". Hence, it is less enigmatic to say that there is only one God, but there are many gods. The concept of "God" and "gods" are different. Some examples of gods are Ra worshipped by the ancient Egyptians, Apollo by the Greeks, Mars by the Romans, and Kwangkung (the God of Righteousness) worshipped by the Chinese. Here, "gods" refer to "divine beings", who as in the case of the Chinese Kwangkung may be human beings before.

On the other hand, "God" with a capital "G" refers to the omniscience, omnipresence and omnipotent. Figuratively it is sometimes described as the Supreme Being, and as the Ultimate Truth. "God" is in English. In Spanish, the omniscience, omnipresence and omnipotent is called "Dios", and in German "Gott". In Sanskrit it is "Tathagata", and in Chinese "Ju Lai" (spelt as "Ru Lai" in Romanized Chinese).

This will remind us that "God" is just a word, and the word itself is not the omniscience, omnipresence and omnipotent, and that the omniscience, omnipresence and omnipotent can be represented by other words like "Dios", "Gott", "Tathagata" and "Ju Lai". If people can realize the difference between the words themselves and what the words represent, they may be less emotive or fanatical. And if they realize that words are often interpreted in different ways, much mis-understanding and antagonism can be avoided.

The reward body of the Buddha are the numerous divine beings devoted followers may see or experience as a reward of their spiritual cultivation. They include the buddhas and immortals you mention in your questions, as well as bodhisattvas and devas (gods).

In prosaic, scientific terms the omniscience, omnipresence and omnipotent is the undifferentiated spread of cosmic energy. In our puny scale, we crave out a infinitesimal portion of this infinite universe and call it our world. Due to our very limited sense perception, we interpret this puny portion of undifferentiated energy as differentiated entities like persons and mountains and countless other things.

Due to our ignorance and arrogance, we think, and often insist, that this puny portion of energy is the only objective reality. It is indeed a great irony that not only this so-call objective world is just a spec in the universe, it also has no objective reality. Its appearance is subjected to our given sets of conditions, like how our eyes and brain interpret electromagnetic waves. When the conditions change, the appearance also changes, but the changes are usually too fine for our gross perception to realize. We also usually do not realize that what we perceive is less that 0.01 per cent of the known world.

Cultivated persons, in science or spiritual disciplines, may extend their perceived world. They may, for example, see gods and heavens. In Zen terms, this is "satori", or awakening to other dimensions of reality.

If they continue their cultivation, they may accomplish the highest attainment, which may depending on numerous factors happen after countless lifetimes or in the next instance. They attain enlightenment, or in Zen terms they see their original face. In Christian terms, they return to God.