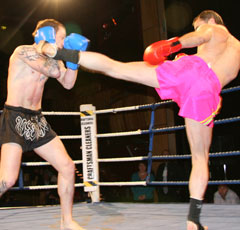 Using high kicks like this kick-boxer does is not encouraged in the type of Shaolin Kungfu practiced in our school. The picture above is reproduced from http://www.prokick.com/archive/news/2007/Sept/Pictures&Results.html

The teacher has had a lot of karate experience and it seems a little karate-like in its nature. For instance in your book you say that kicks in kung fu rarely go above the waist. I have been taught kicks that go above the waist to the head.

In the last thirty years or so, there were many kungfu masters who could not use kungfu to fight, and therefore they incorporated karate into their kungfu sparring. Often they invented a new name for their kungfu styles which frequently ended in the word “do” (or “tao” in Chinese), taking inspiration from the “do” in karate-do and taekwondo.

Some of these masters were sincere in their effort. They lamented on the inability of kungfu for combat and they tried their best to do something about it. (Here I am using the words “kungfu” and “masters” in the way the public generally uses it.)

Kungfu-do inventors thought they had improved kungfu, but paradoxically they had further debased it. Because of their insufficient understanding, they used (from genuine kungfu perspective) third-class techniques, thinking they were first-class. Instead of attaining good health, their students often sustained internal injury routinely left unattended to.

And there was little or no internal force training or spiritual cultivation. I recall my master, Sifu Ho Fatt Nam, often commented that kungfu-do was turning kungfu into “sei pat jeong”, a Chinese colloquial way of saying “turning a cow into a horse, or a horse into a cow”.

Consequently kicks, especially high kicks, were incorporated into kungfu-do. In fact at one time the general opinion seemed to be that the higher one could kick, the better he was in combat. Jumping up to break with his toes a tile held some distance above his head, or spinning round and round to slap the face of an opponent countless times with the sole or instep of his foot, became popular in martial art demonstrations and movie entertainment.

This is an illuminating example showing the huge gap between public opinion and genuine knowledge. Any master who has used kungfu for real fighting will know that such above-head kicks and spinning kicks are both useless and risky. If a master demonstrates such kicks, it is meant to show his leg flexibility, and not meant for combat. 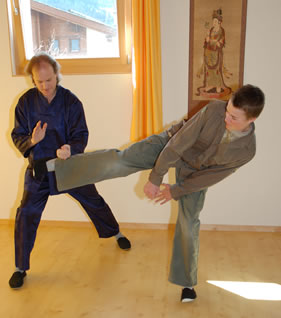 Shaolin kicks are generally low, as demonstrated here by Bjoern in a sparring practice with his father, Sifu Andrew Barnett

Reproduced from Questions 8 in the December 1999 Part 1 issue of the Question-Answer Series.