HOW I MET MY SIFUS 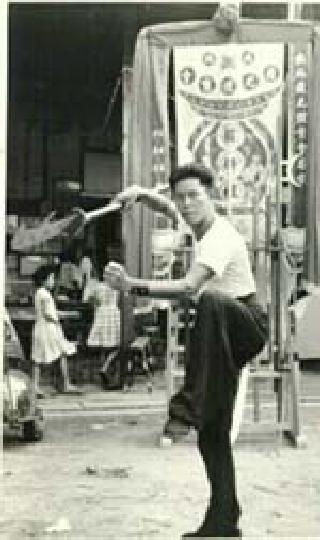 I would like to ask Sifu how he first met Sigung Ho Fatt Nam and Sigung Lai Chin Wah?

As described in the March 2007 Part 1 issue of the Question-Answer series, my first sifu was Sifu Lai Chin Wah, who was more popularly known as Uncle Righteousness. He kindly accepted me as his pupil when he found me watching his kungfu teaching every night at Soon Tuck Association in Penang, Malaysia where my father worked as a clerk.

After learning from Uncle Righteousness for more than ten years, I went about seeking kungfu patriarchs to further my kungfu training. In a small town called Dungun in the state of Trengganu in Malaysia, I learned for about two years from Sifu Chee Kim Thong, the patriarch of Wuzu Kungfu, who was regarded by China as her national treasure. While Uncle Righteousness' kungfu was “hard”, that of Sifu Chee Kim Thong was “soft”. But I was too naïve at that time to understand and appreciate the “soft” aspect of kungfu.

Although my first sifu was a great fighter and my second sifu was famous for his internal force, for some faults of my own I was neither proficient in sparring nor good at internal force. I was, like most kungfu practitioners today, confusing kungfu forms for kungfu. I knew a lot of kungfu sets, and like most kungfu practitioners today too, I mistakenly measured my progress in kungfu by the number of kungfu sets I knew. It was the norm then, as it is still the norm now, that learning kungfu meant learning kungfu forms.

When a kungfu master was exceptional in his performance, like Uncle Righteousness was in fighting and Sifu Chee Kim Thong was in internal force, it was not necessary that his students were also exceptional. The masters were exceptional because they had spent many, many years practicing their arts, often in a dogged manner. There was usually a huge gap in attainment levels between the masters and their students. This is also the case now — with the possible or at least potential exception in our school, Shaolin Wahnam! Hence, it is no surprise that students of famous masters are often not a portion in abilities as their masters.

I was, therefore, searching for the two gems of kungfu, which I later discovered were also the twin pillars of any genuine, traditional kungfu training, namely internal force and combat efficiency. My search ended with my third sifu, Sifu Ho Fatt Nam, after which my journey changed from searching to practicing and developing.

Sifu Ho Fatt Nam was the third generation successor from the Venerable Jiang Nan of the southern Shaolin Temple at Quanzhou in south China. Due to this closeness to its original source, the training I received from Sifu Ho Fatt Nam was vastly different from any kungfu training I had seen in all other kungfu schools. Instead of practicing forms, we focused on force training and combat application.

How I first learned from Sifu Ho Fatt Nam was an interesting anecdote. I sought an introduction to Sifu Ho Fatt Nam through one of his students. I was not at all impressed when I saw their training the first time nor the second. I made the same mistake many people unknowingly make today. I had pre-conceived ideas about kungfu training. I was trying to be smarter than the master.

We would not have any Shaolin Wahnam today if not for an incidental remark which actually proved to be of paramount significance. Besides looking for kungfu patriarchs to learn from, I was also looking for Black Belts in other martial arts for free sparring in the hope of improving my combat efficiency. I did not realize then the invaluable advice I now give to other kungfu practitioners, i.e. free sparring is not the way to train combat efficiency. A friend named Chiang introduced me to Yong, a title-winning body-builder and a top Taekwondo practitioner groomed by Korean masters to take over when the expatriates would leave.

Yong told my friend that he was planning to leave Taekwondo for Shaolin Kungfu taught by Sifu Ho Fatt Nam. Everybody was surprised. Taekwondo was the craze then, and Taekwondo exponents were frequently beating exponents of Karate, Judo, Boxing and other martial styles with their tenet that “legs are faster and more powerful than hands”. But Shaolin Kungfu? Very few people had met kungfu practitioners who could fight.

Why did Yong want to leave Taekwondo and miss a rare opportunity of heading Taekwondo in Malaysia when the Korean masters left, and choose Shaolin Kungfu which many people thought could not be effective in sparring? Yong sprained his ankle in his Taekwondo sparring and sought Sifu Ho Fatt Nam for treatment. While undergoing treatment he saw some Shaolin Kungfu training. He was intrigued enough to join with the hope that this would improve his mainstream Taekwondo sparring. But he found Shaolin Kungfu superior beyond comparison. And all these happened within a few months.

My friend, Chiang, asked Yong how effective Shaolin Kungfu was in sparring, and he later reported it to me. Yong remarked in earnest, “I can handle any Taekwondo exponents comfortably, except the Korean masters.” After a short pause, Yong continued, “Even the Korean masters. If I can't beat them, I won't be far behind.”

If a top Taekwondo practitioner made such a remark after a few months of Shaolin training, I would be a fool not to find out the truth or otherwise from direct experience. So I visited Sifu Ho Fatt Nam the third time and begged him accept me as his student.

“Show me your best kungfu.”

I performed my best kungfu set, “Dragon Strength”, for which I was known to be excellent at, and thought Sifu Ho Fatt Nam would be impressed.

He was indifferent. “That is a very beautiful set,” he said, “but you lack force, and you can't apply that for combat.”

My sifu hit the nail on the head. I was extremely happy. Those were exactly the two gems I was looking for.

True enough, like my siheng Yong, with prior kungfu experience my free sparring with other martial artists improved tremendously after just a few months. Soon no Taekwondo Black Belts wanted to spar with me

Training under Sifu Ho Fatt Nam was not exactly the same as the training you now receive in Shaolin Wahnam, though the spirit and essence are the same. Experiencing internal force after a year and being combat efficient after three years would be a remarkable attainment, considering that most kungfu practitioners would take more than ten years to achieve either, that is if they ever achieve.

Today, a typical Shaolin Wahnam student practicing Shaolin Kungfu or Wahnam Taijiquan would be able to experience internal force and apply kungfu techniques for combat after just a few months, if not weeks. This is simply incredible. Of course your force and combat efficiency are not comparable yet to someone having trained for many years, but it sets the tone and pace for cost-effectiveness. When you train for another three years, your internal force and combat efficiency will be improved for three years because you train with purpose and direction, whereas for most others their total benefits when added together may only be a few weeks though they train for three years because their training is haphazard.

The above is taken from Question 1 of March 2007 Part 3 of the Selection of Questions and Answers.