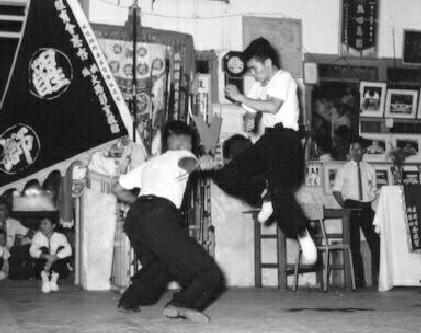 As yours is a question many people are interested in, I shall answer it in some detail. Please bear in mind that while we attempt to be as objective as possible, the answer given here is from our perspective. To have a balanced view, it is recommended also to have an answer from modern Shaolin monks from the Henan Shaolin Temple.

The Shaolin Kungfu taught in our school, Shaolin Wahnam, is very different from the martial art or wushu taught in the Shaolin Temple at Henan today. What we teach is traditional Southern Shaolin Kungfu. We emphasize force training and combat application, and we pay little importance on solo set practice.

We do not teach any classical kungfu sets until our students have completed their fundamental training, which takes about three to four years! This, we believe, was also the way kungfu was trained in the southern Shaolin Temple in the past. Our fundamental training includes stance training, footwork training, breath control, “Golden Bridge”, “One-Finger Shooting Zen”, “Standing Zen”, combat sequences, combative skills like correct timing, correct spacing and fluidity of movement, and combative tactics like “three arrivals”, “avoiding strength and exploiting weakness”, and “flowing with the opponent”. Such fundamental training at Shaolin Wahnam is not found in the teaching of the modern monks from Henan.

Our first classical set is “Four Gates”, which was also the first kungfu set taught in the southern Shaolin Temple. Then, depending on their nature, abilities and other factors, students are taught different classical sets, such as “Five Animals”, “Tiger-Crane” and “Dragion and Tiger”. These are classical kungfu sets from Southern Shaolin, different from those of Northern Shaolin taught by the modern monks.

Unlike students of modern Shaolin monks who may learn a few sets in a year, students of Shaolin Wahnam stick to only one set for a few year so that they can get the best benefits from it — for both combat application as well as for enhancing their daily work and play. Again, we believe this was the case at the Shaolin Temple in the past as well as with other kungfu masters. For example, Fong Sai Yoke and Lok Ah Choy, both great Shaolin masters, focused on only one set, “Flower Set” and “Taming the Tiger” respectively.

Our force training is mainly internal, and consists of energy and mind training, whereas that of the modern monks is mainly external, like push-ups, jogging and striking sandbags. Our chi kung and Zen training, which are an integral part of Shaolin training, are already inside kungfu training. In other words, when we train kungfu, we train chi kung and Zen at the same time.

This does not mean that we practice kungfu forms, chi kung exercises and Zen meditation separately but within the same training session. It means, for example, when we execute a certain kungfu movement, we are trained to focus our mind and channel our chi (or energy) accordingly. As a result we have more energy and sharper mind at the end of our training than before the training, in contrast to many other people who deplete themselves energetically and mentally in their training.

One may easily miss the point and believe that students of the modern monks also train chi kung and Zen in their wushu practice as they also focus their mind and use their chi in their wushu movements. The confusion is due to the limitation of words to express meaning exactly. Of course, in whatever one does, whether in kungfu, wushu, reading or dancing, he has to use his mind and chi or energy. As a result he becomes tired mentally and energetically besides physically. This is the case with the modern monks' training.

For example, when performing a pattern like “Black Tiger Steals Heart”, by regulating our breathing accordingly, we explode 70% of the energy that we have just taken in from the cosmos and simultaneously send 30% of the remaining energy gently down into our dan tian (or abdominal energy field), with all the physical movements and energy flow coordinated in a meditative state of mind. Hence, each time we perform this pattern, and any other kungfu patterns, we add a little bit of energy to our reserve, and train our mind to be a little bit more one-pointed.

Our approach to Zen is also different. While we also read and study Zen for better understanding, our onus on Zen training is practical experience, whereas that of the modern Henan monks is theoretical discussion. Whether we use Zen in our kungfu training, our daily life or our spiritual cultivation, our hallmarks of Zen are being simple, direct and effective. However, modern Henan monks seem to read Zen meaning into their wushu movements.

One of my inner-chamber disciples, Anthony, made an interesting point in a popular discussion forum. He said that if he made a tiger-claw with his hand and asked me whether it represented the “five petals of Zen expansion”, I would answer, “No, Anthony, it is a tiger-claw”. But a modern Shaolin instructor at the Henan Temple may interpret the tiger-claw with the five petals.

Similarly in our daily life if we have to submit three copies of an application form, we would just do that as required. We would not, for example, argue that one copy is sufficient and if more copies are required the recipient can reproduce them himself. If my wife wants a cooker for her birthday present, I would buy her a cooker, instead of buying her a diamond ring and argue that it is more romantic. This is not being submissive or unimaginative; it is being simple, direct and effective — the hallmarks of our Zen training. Nevertheless, I may still buy the diamond ring, but it will be placed inside the cooker with a note saying, “This cooker comes with a surprise inside. Please open with care!”

Another major area of difference between Shaolin Wahnam and the modern Henan monks is our philosophy of and methodology on combat training. We believe that while the main aims as well as the best benefits of our kungfu training may be non-combative in nature, the basic requirement of any art to be called kungfu is combat efficiency. If one cannot use his kungfu to fight after having practiced it arduously, then something is basically wrong.

Modern Henan monks do not share this philosophy regarding their wushu teaching. The Chinese government which introduced wushu into the Henan Shaolin Temple expressly stated that wushu was promoted as a sport and not a martial art. But later, when frustration over the inability of wushu exponents to fight became embarrassing, the Chinese government introduced “sanda”.

However, due to various reasons, the methodology of combat training has been lost generally. Hence in their sanda, students of the modern Shaolin monks as well as of other kungfu styles generally resort to Western Boxing, Kickboxing, Karate, Taekwondo or free style fighting. But we at Shaolin Wahnam as well as other exponents who practice genuine traditional kungfu (including Taijiquan, of course) use our typical kungfu techniques in our sanda or free sparring.

It is understandable that many students of the modern Shaolin monks may vehemently and aggressively oppose our opinion that their art is modernized wushu and not traditional kungfu. Without personally experiencing internal force, they may be unable to really appreciate what internal force is. Without any exposure to combat application using typical kungfu techniques, they may mistakenly think that kungfu patterns cannot be used for combat.

Hence, even if they accept that internal force training and combat application are essential features of traditional Shaolin Kungfu — and it is difficult to deny this fact as this has been extensively recorded in Shaolin literature — they may argue that their training also includes internal force training and combat application as they practice some external chi kung forms and breathing exercise, and they also free spar though they use Kickboxing or free fighting. It is like Taiji dancers saying they practice genuine Taijiquan just because they perform external Taiji forms even though they have no internal force and cannot defend themselves, or those who merely sit at a lotus position thinking that they practice meditation even though they cannot relax and their mind is dull.

The above is taken from Question 1 of December 2003 Part 1 of the Selection of Questions and Answers.