What would you do if an opponent locks your head using the pattern "Hiding Flower in Sleeves" as shown in the picture below.

If you think such a head lock is impossible in real combat, you will be in for a surprise. If you know the method, have the required skills and are ready to practise its application consistently for a few months, it is not difficult to apply this head lock on your partner in a sparring session or an opponent in a real fight.

One approach is shown in the webpage Are these kungfu patterns realistic and practical in combat? That webpage also shows a counter-attack using the pattern "Fierce Tiger Crouching at Cliff", if you can apply the counter before the opponent has completed his movement.

If you are too slow and the opponent has completed his attacking movement, you would have to respond with another pattern. One such counter pattern is "Angry Bull Charges at Fence" and is explained in this webpage.

Sometimes, even though you can be fast, you may for some reasons purposely let the opponent complete his attacking movement. For example, if you attempt to stop your opponent in the midst of his attack, you have to employ some force to react against his force. So, confident that his attack cannot harm you, you allow him to complete his attacking movement and just when he thinks he has you under control, you turn the table round against him when he least expects it. Or you may want to get him onto the ground instead of striking him. So you use the Angy Bull pattern instead of the Fierce Tiger pattern. 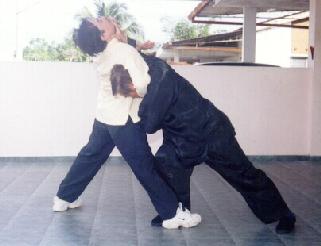 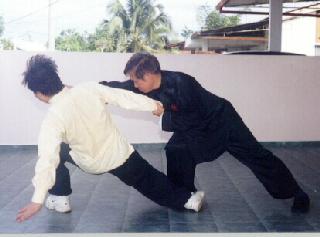 In the counter-attack against Goh Kok Hin's head lock when he has completed his attacking movement, I adjust my Bow-Arrow Stance so that my front foot hooks his front foot, and my front knee presses against his front shin. At the same time I grip his locking hand to prevent him from suddenly releasing his hold and striking my face, and place my other hand against his chin.

Then I lower my stance with my knee pressing hard against his shin, and simultaneously push hard at his chin. (Be very careful when you practise this application with your friend! Press your hand against his chin cautiously; if you apply force correctly you may kill him by dislocating his neck, like what happens in hanging!). The opponent will have to release his hold on my head, because his own holding on to me acts like an anchorage for me to dislocate his neck. I can push him to fall back or push him to the ground.

But don't ever underestimate your opponent. Don't think that this surprised counter-attack will finish off the opponent and he does not know what to do. Always presume that your opponent is skilful and capable. This is a basic Shaolin tenet. That is why in every Shaolin move, there is always coverage for safety and allowance for retreat. 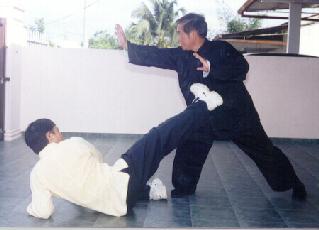 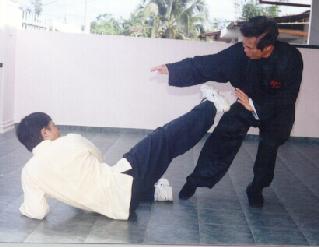 Goh Kok Hin is capable. He drops to the ground and kicks up at my solar plexus or abdominal dan tian, using a pattern called "Reversed Striking of Purple Bell".

I move my front leg backward to a False-Leg Stance to avoid the kick. Immediately I hold his kicking leg in between my elbow, move forward slightly and strike the side of his knee with a palm chop using the pattern "Trimming Bamboo". Again I must be ready that the opponent may respond with a surprised counter-attack.