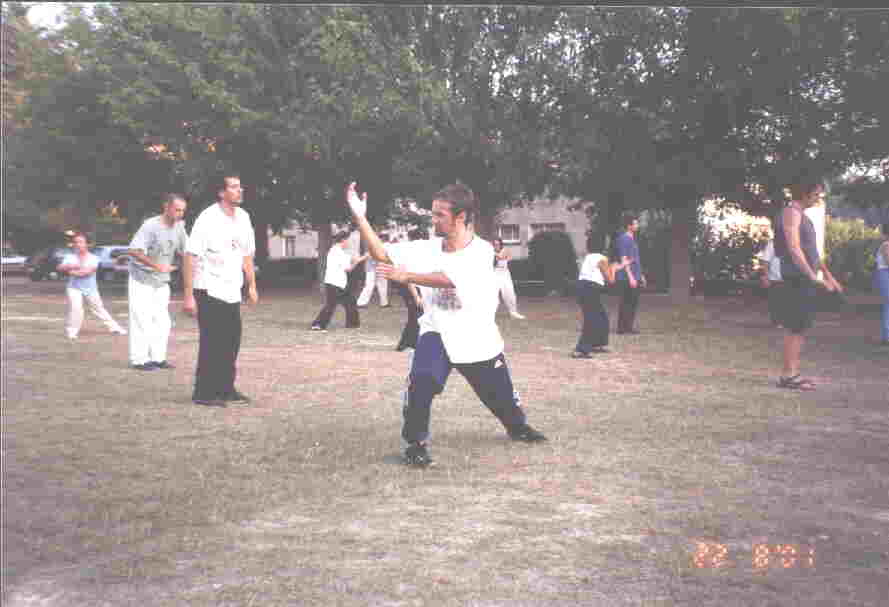 Many of the students are important people. Here is Manuel Tirado, a Taekwando fifth dan master and international Taekwondo champion whose students have won many gold metals in international competitions. He is practicing "Grasping Sparrow's Tail" to develop internal force.

I attended the Tai Chi Chuan course at Cortes de la Frontera, Malaga, imparted by Sifu Wong Kiew Kit to go deeper as much as I could in the knowledge of this complete art for health, mind, combat and spiritual achievement.

I have known Tai Chi years ago. I liked it because of its harmony of movements but I have fallen in love with the Tai Chi Chuan in the intensive course that I did last year at a place called San Garcia in Segovia and this time I realised why we had to call it correctly with the "chuan" at the end, that is explaining to us that it is an internal martial art.

Everybody there received the message and we made a big effort to learn something that was quite far away of the previous learning. Many of the students are important people, like masters, scientists, doctors, company directors and managers. The course was intensive and almost without breaks and I was hot but the place had big splendour of green grass and big trees with their shadows moving around and we were flowing happily in chi. 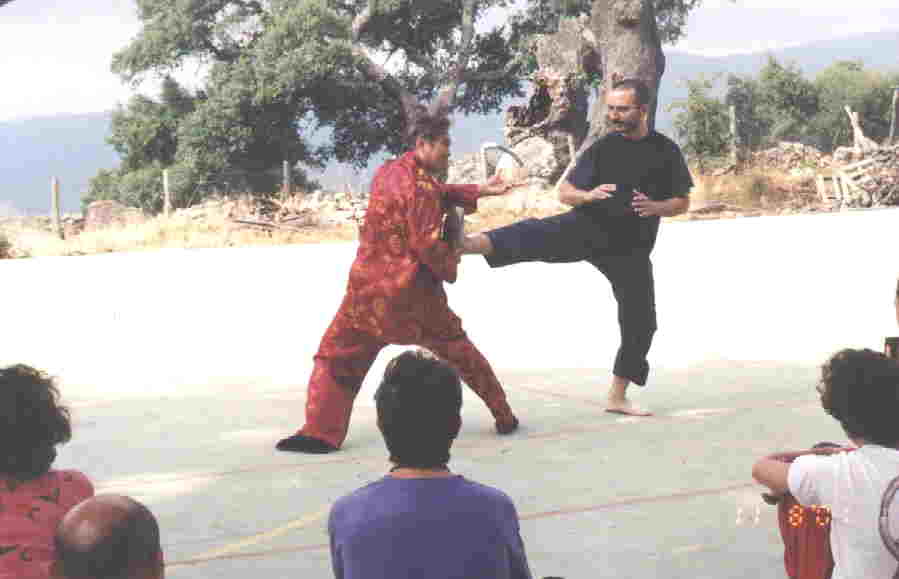 Sifu Wong demonstrates how to counter a kick from Jose Antonio. Jose Antonio is a scientist.

The schedule was from nine o'clock in the morning to one in the afternoon and from four to eight in the evening. We did not stopping during the periods of 4 hours, not even to drink something. Sifu looked not to need anything and we were starting to get drunk with chi and were also feeling not to have any need.

The schedule was tough and even that we were adding at least another 4 hours of practice on our own. Muscular pains disappeared with the flowing of chi and every day we were feeling stronger. Some of us felt so sure of our strength at least until this moment and this was only the beginning. The last and the big prize was still far away but we were already 'guessing' something of what was ahead. 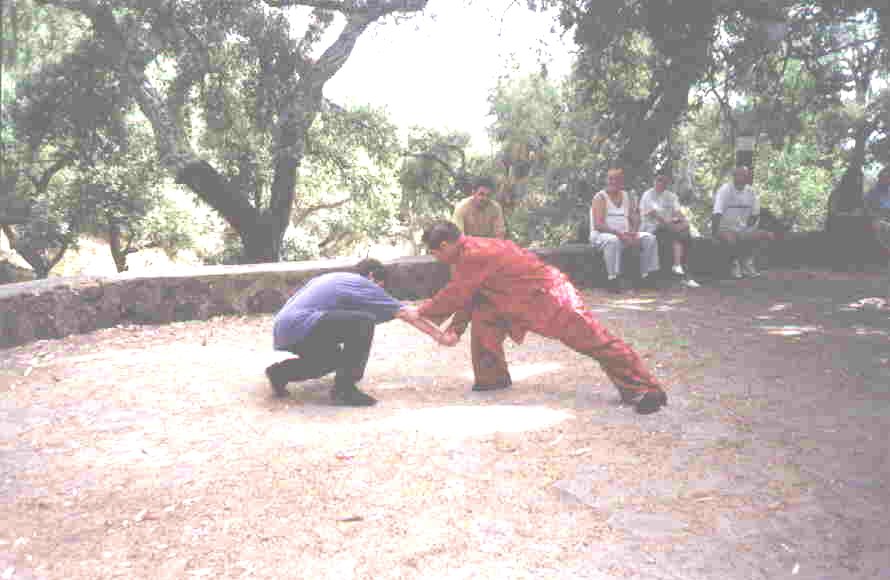 Sifu Wong often emphasizes that Tai Chi Chuan is a martial art. We did a lot of combat application. Here Sifu Wong demonstrates subducing an opponent without hurting him.

They were undescribable days.....

The courses for the Fundamentals of Tai Chi Chuan, Tai Chi Chuan Form, Pushing Hands and Training of Internal Force were at Cortes de la Frontera this year and the same schedule was repeated in part because this was after another 4 days of Chi Kung Course and we were ready to receive the rewards of vitality, health, joy and inner peace that a right practice of this art includes.

The environment was splendid and all of us felt that the 7 days had been a very short time. It was difficult to say 'bye bye' or even 'see you soon'.

I was feeling very fortunate because in a few days I was repeating a longer intensive course in Girona. We were planning to stay 6 days dedicated to Tai Chi Chuan and I was repeating also the course of the Metamorphosis of Tendons again. I only had to relax a little my knees to enjoy it completely. 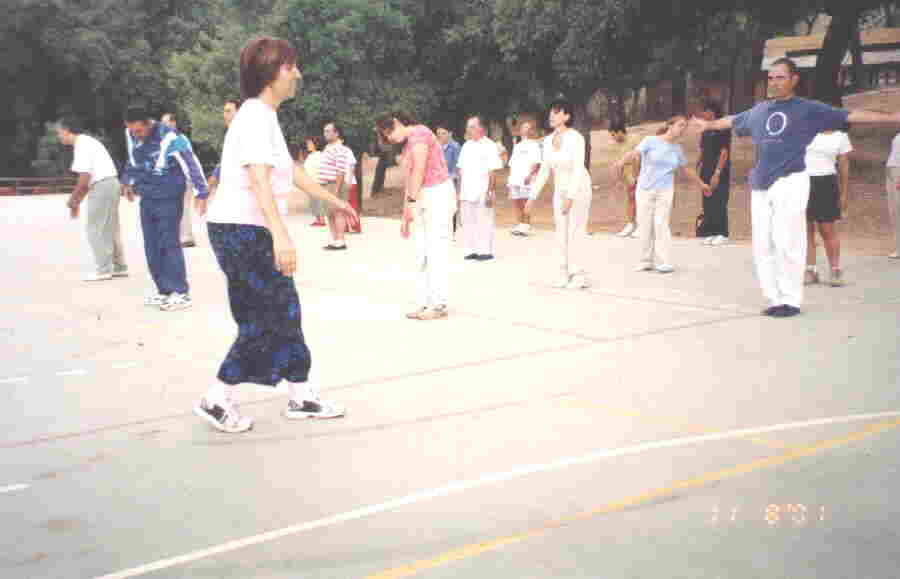 A group of students enjoy chi flow after a Tai Chi Chuan set practice. In the foreground is Laura, the writer of this testimony.

I rested for 4 days and I met the group that had been practicing Chi Kung there for 4 days and besides in the program of Tai Chi Chuan there was a novelty that we had never practiced in Spain with Sifu Wong, the Chen style form.

I am going to write mostly about this form because althought on that day I was translating into Spanish the whole course and I couldn't practice at the same time, I have fallen again in love with Tai Chi Chuan when I began practicing it the day after with my fellows in the breaks, early mornings or at night. 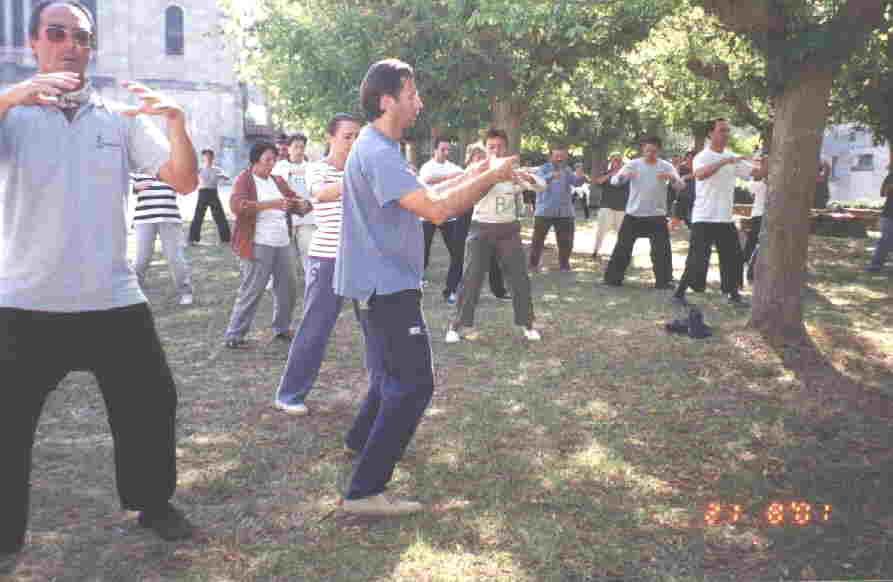 Force training and combat application are two crucial aspects of Tai Chi Chuan as a martial art. The picture above shows students practicing the "Three-Circle Stance" for force training. In the foreground are Attilio (left) and Riccardo (right). Attilio is the owner of a beautiful holiday resort along the Italian Mediterranean coast, and Riccardo is the manager of a large company.

During the course, from my outside view, without flowing with the group, it seemed to me to be very different and I admired all the students who had made big effort physically and mentally to do a very hard job but with great rewards. The group had a great variety and some of the students had better shape or capacity than others to learn but all of them have gotten to do it with dignity in 8 hours of hard work each day. This to someone who knows something about what I am talking about will understand what a great achievement this is.

All the participants had great merits but specially Sifu Wong who knew how to orchestrate the rhythm and the effort so that the learning was a possible thing and the students didn't feel exhausted or discouraged. The Chen style form that Sifu Wong taught us was a combination of two Chen style forms, I think, not very sure, of the 1st and the 3rd and some patterns were very beautiful, others very hard and others very difficult -- from my point of view, for many of us because of the kickings and the quick turns with manifestations of internal force. It is easy to realise why this form is much more admired than the other styles. 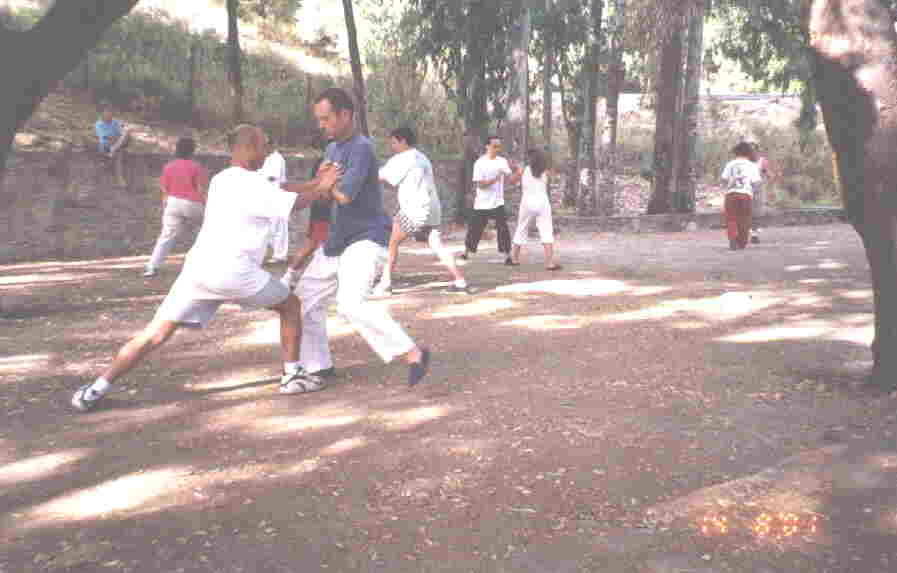 Inaki, a doctor of psychology, is practicing Pushing Hands with a partner. Pushing Hands is an important part of combat application

But I have to say that it is beautiful. Those days at Girona, instead of translating I followed my fellow classmates to learn the Chen Style form. The energy is fantastic. Now, as I am writing, it is 1 a.m. and as most of the days I am sleeping no more than 6 hours and even that I am feeling fresh physically and mentally and it is a miracle! My knees that yesterday were disturbing me a little, today they have recovered in spite of been working a lot with them, but what an energy.

I also have been practising the two patterns of the Tendon Metamorphosis and my legs are absolutely well, strong and light.