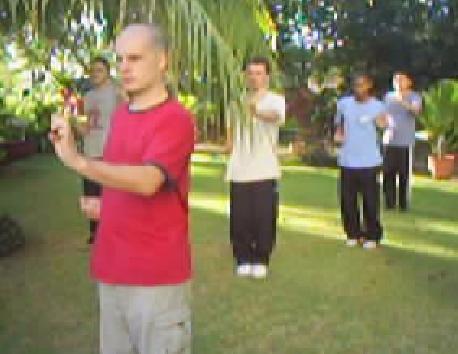 It's time to post my impressions of this course.

First of all, let me say that as always the social and family aspect of the course have been a great highlight. Seeing old friends, meeting new ones, and going through the course together make for unforgettable memories.

Being the second course of this kind for me (I would count the special Shaolin course separately), it was much much easier than the first time, but by no mean devoid of challenges!

My general aim for this course was to improve my combat efficiency.

Well, I am glad to say I achieved them all. By the last day I could spar without ever "losing it". I remember how at the previous courses I would lose track of my dantian after some time of sparring. Now I can spar, press, and be a threat while always being relaxed and in control.

Of course it was more difficult when sparring with much highly skilled partners, like Mark or Ronan, but at least it didn't build up into some blockages, and I could at least manage not to get overwhelmed. (Even after receiving a nice leopard punch in the eye from Ronan. Given that I started Shaolin Kung Fu only a year and a half ago, and had no experience of martial arts whatsoever, it is a great testimony of the efficiency of Sifu's teaching.

It also helped that I didn't crash my shoulder on the second day of the course.

I need to meet Maxime at Tesco in 5 minutes so I will talk about the constant improvement in Sifu's methodology later on.

I'd just like to say what a joy this course has been. Again my appreciation and love for the Shaolin arts has been deepened to unfathomable depths! I learned more than I possibly could have imagined and met some great hearted people. All in a one week course!

We all know how important going back over the basics are, no matter what level you are at. But I always saw it as a chore to go back however many steps and work solely on my footwork or breath control etc. I was proven totally wrong in this case! It wasn't a chore at all, on the contrary it was pure joy to deepen skills in the basics. I realise full heartedly now what Sifu has been telling us from the beggining, "The secrets of the masters are found in the basics."

I can't fully put into words how gratefull I am for this devine realisation and for all the gems my brothers, sisters and myself were given on this course. I just feel the best way we can repay Sifu and all past masters is to train dilligently, follow the 10 Shaolin Laws and pass the arts onto deserving students, irrespective of race, culture of religion. That way this incredible art will not be lost.

Thanks again to George and everyone else contributing to this thread. I'd like to invite everyone to join in and post their expierences, good or bad. It's a great help to anyone interested in spiritual joy, health and combat efficiency to read the accounts of people who practice the Shaolin Arts. Especially the accounts of people like Hubert, who with no previous martial arts training, can spar with real Kung Fu for hours at a time and not be physically or energetically shattered.

This in itself is a marvellous achievement after just 18months practice, but still not the most marvellous! I have been through severe depression in my life and so I believe the most impressive achievement is that his spirit and his happiness have grown steadily since he began practicing. And not just Hubert, the transformations I've seen people go through after just a year of dedicated practice is truely remarkable!

For myself, the happiness I've aquired through training has at times been simply overwhelming! Everyday is better than the last (even the bad days are good!) and the key is regular practice.

Many thanks to Sifu, all past Masters and God for making Life such a joy! 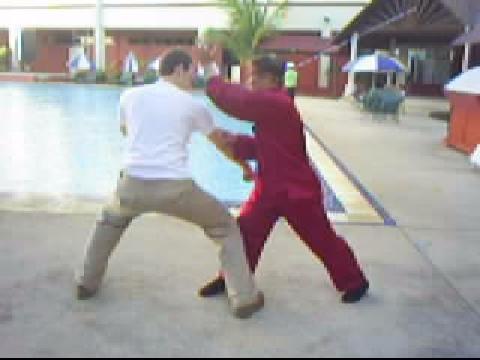 I just wanted to add my own contribution to this thread.

The course was absolutely fantastic. I had a great time in so many ways and on so many levels.

As always with the Kung Fu Courses, you spend about 32/35 hours studying with Sifu and this is great! Tough but great.

So first of all I would like to thank Sifu for his teachings and pay my respects to all the past Masters.

I am not going to even try and go into any detail about the course as George has done an excellent job on this already. Also I would like to thank George for doing such a great job of posting so regularly and in such great detail.

Ok one thing that I found really memorable on the course was the catch phrases from Sifu.

You are doing kung fu, not opium smoking

These are going to stick with me for a very long time.

Meeting all the people on the course, some old and many new was truly great, everyone worked really hard and did really well. (Smile)

Two things I would like to comment on. This was my third course with Sifu and like Ronan said I picked up so much and got to look at many of the different aspects of Kung Fu.

One thing that really impresses me is the way that Sifu is constantly refining his teachings, techniques and skill in the way he presents the material. Both Ronan and I were commenting on how all the people attending the course were picking up the Kung Fu so quickly and we both put this down to Sifu's ability to transmit the essence. Either that or everyone was better than myself when I did the course (it would not be hard to be).

The second part for me was being in a position to see everyone when they hit what I and other instructors call the frying point. This in essence is when your mind and body are overwhelmed and you forget what limb is what.

Sifu will call out to right punch and you end up kicking with your left leg. Sifu says that he will push you mentally, physically, emotionally and spiritually and he does. The reason I enjoyed this so much was because I had been there and I can truly appreciate what people are going through.

More importantly I get to enjoy seeing them when they go beyond this point and they realize they have got more in reserve than they imagine. It really is a nice feeling to see someone who could not control his body suddenly move up a level and there Kung Fu practice gets better.

Thanks for your time